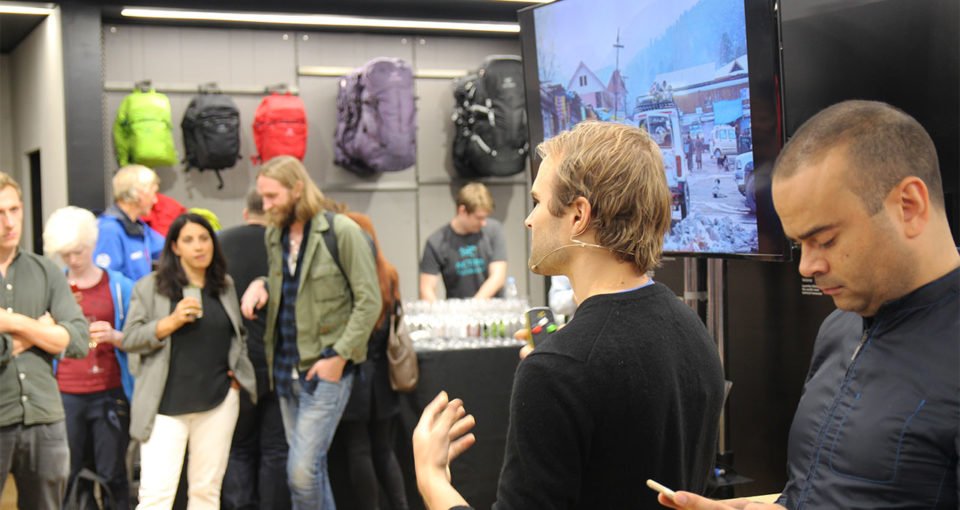 Earlier this month, the ever-illuminated hub of London’s Piccadilly played host to a new group, as discerning lovers of the outdoors trod their mountain-worthy treads to opening of Arc’teryx’s European flagship store. To celebrate the opening, the Vancouver-based brand had flown over its VP of Marketing, a lead designer and one of their signature photographers, Jordan Manley.

After outlining the achievements of his multi-year project, A Skier’s Journey, Manley gave a presentation of his climbing tour of the British Isles and his new reverence for the culture. Here’s it transcribed:

…and so through this multi-year project I really developed a passion for storytelling, by using my camera and my lens as a way to explore landscape and culture. It’s this lens that I brought to the UK in April when Arc’teryx asked me if I’d photograph a story about the culture of climbing here.

As Mina [Leslie-Wujastyk] says, I’m not a climber, so the whole thing was new to me, I felt that I had a real significant weight on my shoulders trying to represent a really rich history and a culture that I didn’t really know much about, with one I didn’t really share a kinship with at that point. But it also meant that I learnt a lot.

The first thing I learnt about was weather, which I’m sure you all know about at this point. So I went and met Katy [Whittaker] and Mina and they were wearing these big down jackets and it was relatively warm and sunny and I was kind of confused but I didn’t say anything. We made our way up to the crag and a few hours later the skies opened up and big, fat chunks of snow started ripping across the landscape, covering everything white, completely soaked and completely cold. And so obviously they knew exactly what they were doing as I assured them on the way back to the car. But it was a pretty appropriate welcoming to British weather.

That day we were at Gordale Scar in Malham, North Yorkshire and just prior to getting there I had done a quick Google Search to see what that place looked like and in this Romantic Era painting came up. I thought ‘Wow’, this place is incredible. Then I thought if you took Google Search of any crag in British Columbia where I’m from, this sort of thing would never happen. We don’t have that same sense of history right on the surface, it’s really accessible, even in what you consider far away from the city. That was really interesting.

That dynamic weather we had the first day really continued throughout the trip and what it meant was there was this fantastic beautiful light going on. As we continued I started thinking about these paintings from William Turner, another Romantic Era, sublime landscape painter. I compared the paintings in my head that I knew from him with the pictures that I was taking and I realised that I was in a way working within a very old aesthetic tradition that was established here in Britain along that very same coast many centuries ago that prioritises really dramatic light and dark, the power of nature and ultimately our small place within it. So that was neat thing for me to realise, that the things that I see as beautiful and try to portray as beautiful are also beautiful because of the way other people have seen them and represented them through their art.

Chris Ensoll, BMG guide, extraordinaire, he took me all over the countryside and as we were driving in the Lake District he told me about his friend who was in his 90’s, who died at 98, and he was a shepherd. Chris told me that he loved to listen to his friend talk about the fells that he had worked his whole life and knew so intimately, just like a climber. Just like climber, shepherds have very particular ways of talking about their home, their fells, in a vital way so they can get home safely at the end of the day, because they truly understand that landscape, just in the same way that if you’re a climber you have to know all those words and elements. A few words I really liked:

shreep – slowly clearing mist
tor – a high rock, pile of rocks on top of a hill
fèith – a fine vein-like watercourse running through peat, often dry in the summer

One of the things I’ve loved photographing for a long time is the process of nature reclaiming a human, disturbed or augmented site. So during my trip I got the chance to go to these old quarries that had regrown in a way and they’ve also been occupied by climbers, climbing in those spaces. To me that begged the question, where’s the line between nature and human, or nature and culture and I think after touring Britain for a couple of weeks, that line is a very difficult one to find, if not obliterated.

Then we went to these even more spectacular quarries in Landers where they had basically tunnelled the mountain and mined it from inside-out, bringing it to its knees. It’s really easy to romanticise these sorts of [local stone] buildings, but there’s also the grim reality that they brought that mountain to its knees through human power.

Obviously we spent a lot of time driving around. 3000 miles. So we spent a lot of time on roads and I really liked that the road builders – whoever they are – resisted the North American standard to widen, to flatten and to straighten.  These roads consequently felt only one step removed from a trail. So there was a really intimate feeling even if you’re in the car, you feel every bump and the flesh of the landscape.

Another theme I noticed as we were driving around were the drystone walls that lined all the roads of the countryside, the stone that those were made of matched the stone that you would see in the township. As we drove from the township up towards the crag, that stone matched the crag. So there’s this really interesting synergy between these rocks, it’s kind of a lithic telltale, so before you’ve even got to the crag, you knew what type of rock you’d be climbing.

There was a really nice localism that predates our new ideas of localism. This is Stanage Edge which you can pretty much drive to the top of, there’s a road right off the backside and you can walk along it super easily. For me this image asks the question, ‘what’s the point of rock climbing when you can just get to the top super easily?’ The point isn’t just to get to the top, but that isn’t besides the point either.

It wasn’t particularly scary when I got there, it was really nice weather, it was warm, but it wasn’t too warm, the ice was still good (this is April and still there’s ice climbing). I asked him, ‘Where are all the people, Chris, seems like perfect weather?’ And he said, ‘Oh don’t worry, just come back in the middle of winter when its really shitty out, there will be tonnes of people out here.’ There’s something about that in the mentality of British climbing, that kind of weather is what’s preferred, in a way.

The last series of slides is kind of about Chris and about the idea of getting a great guide, the importance of that, as a traveller and as a photographer. This is our final day on the Isle of Skye. Chris got me up at 5am which was awesome, because I love getting up early, as he soon discovered, and he made sure we had fantastic Scottish weather; he called the right people and secured all that, that was really nice of him.

He waited around for me as I took the longest route possible up the mountain, zig-zagged back and forth trying to find the perfect boulder. He belayed me up the ridge line, secured me at the top, walked back down, climbed back up with Dave so I could get the photo of him climbing. So he does about four times as many trips as the photographer. And then he lowered me down so I could get a shot of them up at the top of the pinnacle, the ‘inaccessible pinnacle’ it’s called.

Then we ran down the mountain, jumped in the car. Chris drove for five hours straight to the north end of Scotland to the Old Man of Storr. At this point we only had about two or three hours of sunlight left and we knew it was going to be rain and crappy out tomorrow and this was our last chance to the get the photograph of climbing this amazing spire.

With that in mind we spent an hour running out to the end of the headland and then Chris did what any reasonable person would do: he got naked and he jumped in the freezing cold North Atlantic. With the rope in one hand and a dry bag in the other, he slowly bobbed across and paddled his way across, he got purchase eventually on the barnacles rock, cutting himself in the process, and he secured the ropes so Dave his climbing partner could then set it up and meet him on the other side. So Dave did that while Chris got his clothes on and shivered his way back to warmth.

It had been about 20 years for Chris, since he had last climbed the route. They forgot the guide book so they just made it up as they went along, they made amazing, beautiful work climbing this thing. The whole time I’m worried about the light, are they going to get up top in the light.

Just as the light was about to go down, Dave got on top. He was really happy, they were really happy. It was a pretty spectacular way to end the trip. Then they rapelled back down, just as the sun had set. So all this was possible because of Chris and his guiding, and it really showed me the importance of having that really amazing local ambassador and local guide. For them to open their world up, to allow you to follow them through their world, through their eyes, and ultimately the importance to have that guide to understand any given landscape and its culture. So thank you, Chris.

Drop by the Arc’teryx store at 212 Piccadilly – London’s new destination for alpinism.