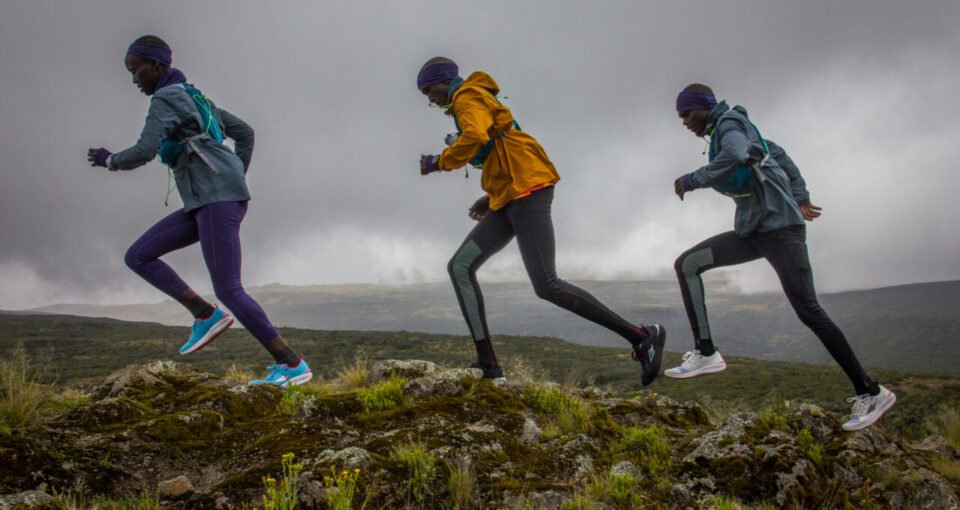 Kenya is well known for its long-distance running heritage and participation in national championships, brimming with talent from the country’s national sport. But the country has only recently started to take equity in the sport itself. Since 2016, the narrative has started to tilt with the gradual rise of Kenyan running brand Enda, who have entered the competitive and technical footwear market. The first five years of Enda have seen the brand traverse international trade, domestic tax law and the performance demands of international running community.

Enda was founded in 2016 by Navalayo “Nava” Osembo and Weldon Kennedy. The business partners met in 2015 over a shared interest in dramatically increasing the amount Kenya benefits from its reputation in the sport, especially given associations with a mass participation activity. Osembo grew up in Kenya, training as an accountant and lawyer before taking a position for the UN in Kenya, a position she took up in New York. Kennedy is a social activist, pairing this work with an obsession for running footwear and design.

It didn’t take long for Osembo and Kennedy to agree on the brand and company name. Enda means “Go!” in Swahili, the language most widely spoken in East Africa and the same two syllables that are used to cheer on the Kenya’s athletes. Meanwhile the company slogan printed on each pair of shoes is “Harambee”, adopted from Kenya’s National motto relating to the self-empowerment and creating community cohesion that comes through local activity.

The company has two models, each promoting a mid-foot strike and broad metatarsal contact with the ground. First came the Iten, the Tesla Speedster version designed for shorter, faster runs and to capture the attention of dedicated runners. Iten is a village on the western frontier of Kenya’s Rift Valley (Google Maps), and also hub for international long-distance athletes who use the lanes, trails and local track to train (Mo Farah spent time there while preparing for his hour record).

In 2018, the company crowdfunded their second trainer, an everyday shoe called the Lapatet. Lapatet translates as “run” in Kalenjin, the language spoken by many of the country’s best runners. The Lapatet shoe aims to act as a cantilever to the Iten, meant for longer, slower runs that build an endurance base during the off-season. We all know we should doing them, so now the Lapatet serves as a platform and reminder.

The commitment to manufacturing in Kenya creates a unique story for Enda, but also surfaces a number of challenges. The country doesn’t have developed manufacturing infrastructure, meaning that certain parts of the shoes need to be imported from China – at the moment, shoes are 52% Kenyan-made. Then there is the task of handling chemicals and operating within international regulation for this – Osembo admits that the company is still lacking expertise.

Nevertheless, the idea is to move production entirely to Kenya. A team from China is already part of the training process and some of Enda’s contractors have started to think about what machinery they can buy to service Enda’s supply chain. All shoelaces are made domestically, for example.

It doesn’t help that Kenya’s legal environment isn’t advantageous to Enda. Whereas foreign investment in manufacturing facilities is encouraged by tax breaks, Enda isn’t eligible for incentives – they use pre-existing facilities. Another complication relates to working capital. The company pays the government VAT according to sales but because exports are zero-rated, they receive the tax in full. This wouldn’t be the case if Enda were in an export processing zone (EPZ) where VAT isn’t applied on goods in the first place . But government contact is tangible – the Trade Minister visited a partner facility earlier in 2020.

Referring to these inefficiencies in an interview with World Intellectual Property Organization, Osembo notes:

If I don’t need to own a car to move from one location to another, or to own a luxury beach house to enjoy a holiday in one, then I certainly don’t need to own a factory to be deemed a manufacturer. The regulatory and legal environments really need to reflect the realities of today’s shared economy and support local businesses.

International adoption and accolades fill a list: Enda won the New Brand category at Munich’s ISPO tradeshow in 2018. An ongoing engagement with the British Council allows Osembo to access a global fashion community – Enda has found a designer to partner for upcoming models. The company became a B Corporation in December 2019, underscoring its social commitment.

As things stand in 2020, most of Enda’s shoes are sold overseas – after production, their RRP is too dear for selling in Kenya. In 2019, 90% of sales came from orders in the United States and a further 8% in Europe. A more affordable model is part of Enda’s vision – the domestic fanbase is small but growing.

There’s no shortage of ambition for Enda – the plan is to become one of the top three global sports brands in the world and build this reputation on top of a circular supply chain. If the brand can emulate the national’s success on the track, they’ll do just that. Osembo is bold, writing by email in November 2020:

2021 is looking like a very exciting year for us. We’ve got a great product lineup, are ready to launch in Europe, and are looking at a world that’s looking more and more for a brand like us. There’s been a running boom during the pandemic, and millions of people looking for new running products. Interest in ethically made and environmentally friendly products has surged, and we’re best in class in both cases. The African Free Trade Agreement will expand our possibilities of serving local markets. We looking forward to getting tens of thousands more people running Kenyan next year.

Learn more about Enda at endasportswear.com. All photography courtesy of Enda.