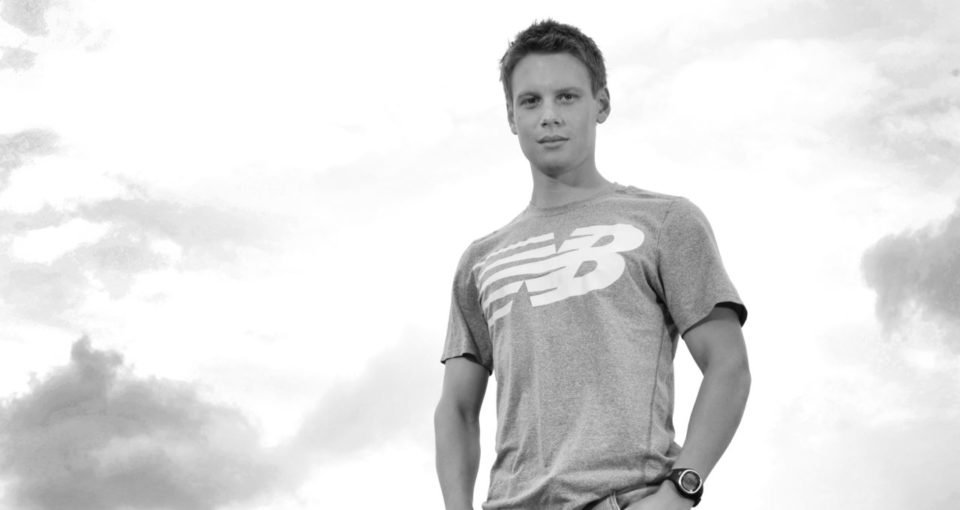 Last week at the New Balance British Miler launch party, we caught up with Great British 1500m runner and Olympic hopeful James Brewer.  Here are his thoughts on the Olympics, being chased by dogs and the ultimate lap of honour.

Ha ha.  Well, I used to be a gymnast until I was 13/14 and was training 6 times a week.  When I gave that up I had too much time on my hands and I followed my sister onto the track and started training that way.  I wouldn’t say I’m running from anything in particular…. sometimes the odd dog!

Are you running towards anything?

I just want to know what’s possible.  There’s no way of telling what you can do until you’ve tried it, and I’m quite a believer of the whole “do things because they can be done”.  The more people that doubt you, the more reason there is to go out and do it.

Probably the World Champs in Berlin in ’09.  I remember there was a German guy in the heat before mine who hit the front just as I was walking out to the track, and the stadium went absolutely crazy.  He had no chance of winning, but still!  At the back of your mind you think that this is going to be in London and it’ll be even bigger as it’s the Olympics.

Where has been your favourite place to train and why?

I recently spent six weeks out in Kenya, which was great. All the great Kenyan distance runners come from one area and in fact one little village called Iten.  It only has about 3000 people, and you can’t go out running without bumping into a former world champion. You can’t not be inspired!

You’ve got the World Championships in Istanbul coming up, what are you most looking forward to about it?

Just putting on the British vest again.  It’s been quite a long time and it’s not been the easiest last couple of years, so I can’t wait to do that again.  There’s also nothing quite like a big race in a full stadium.  You get so much more emotional when you get to something like a World Championship, because it means so much to everyone.  It’s not like some Grand Prix where some athletes just turn up for the money, and then normally run badly.

The Olympics is nearly here, how is preparation going?

It’s going well.  The hardest thing is going to be qualifying.  Anyone that qualifies can then potentially make the final, that’s the kind of level that you have to be at just to make the team.  Qualifying time is 3.35 which no one got last year… so it shows what we’re up against.  But if you get it, then you go, and you have every chance to make it.  Like in Berlin in ’09 – I only just scraped in, but then nearly made the final.  I find I tend to thrive under that kind of pressure. I love it.

As you used to be a gymnast, if you were to win a medal at the Olympics what celebration would you do?

Ha ha. Ummm…. I thought about the backflip, but in spikes in front of that many people I’m not so sure!  I think a very slow lap of honour…. on my hands and knees.

And we will hold you to that.

You can watch James competing for Great Britain in the IAAF World Indoor Championships in Instanbul from 9-11 March 2012, broadcast live on channel 4.