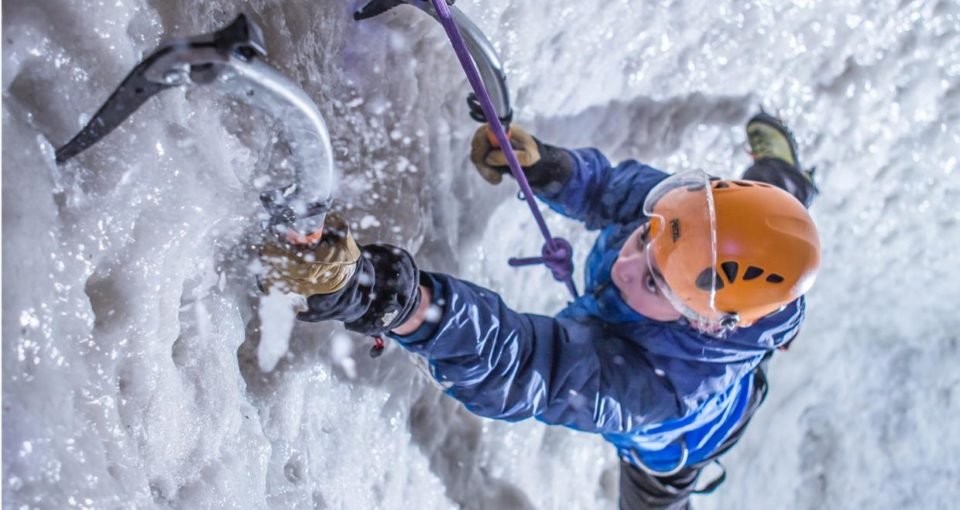 When I was asked to go ice climbing in Covent Garden, I wasn’t entirely convinced by the sincerity of the offer.  But believe it or not there is indeed a massive freezer in central London that houses a 25ft ice wall for both novice and experienced ice climbers to get stuck into.

Ice climbing, simply put, is the act of scaling a vertical sheet of ice using pick axes and crampons (shoes with spikes on). While traditionally an alpine sport done on frozen waterfalls, iced over rock faces and glaciers, any ice face will do as proved by a host of indoor ice walls around the world.

As a sport it is physically challenging,  requiring a combination of balance, strength and skill.  Axes are swung into the ice above a climber’s head and are used as stabilisers while the climber kicks the front part of their crampons into the ice.  This technique is known as front pointing and can be quite tiring on calf muscles, which explains why climbing boots have evolved into today’s extremely rigid “plastics”.  As a novice ice climber, it’s surprising to see how little ice is needed for a firm hold with the ice axe.

Operated by Vertical Chill, the London ice wall is situated inside Ellis Brigham’s Covent Garden Store and has been there for almost a decade.  The wall ranges in steepness, making it suitable for complete beginners up to more expert climbers.  At -7°C, it merits the name Vertical Chill, although you can be sure to leave the wall sweating after some intense climbing.

The wall is open six days a week (on Mondays it has to be reconstructed from scratch) and has space for two climbers at a time.  Given this Monday reconstruction, the wall gets easier to climb as the week goes on as the ice has been chipped away leaving more and more holds.