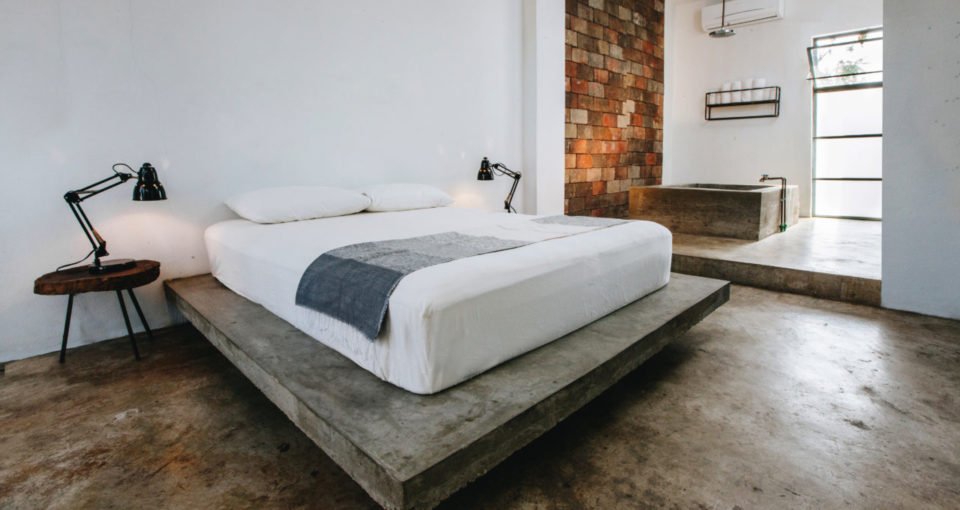 Completing a mental picture of Mexico’s Los Cabos filled with massive cruise ship-like hotels would be nearly entirely accurate were it not for a few hotels that recognise that “less is more” is worth designing for. Where hospitality giants usually take an industrial approach to numbers, acknowledging bed count as a golden metric, other savvy hoteliers place an emphasis on “small”. The 8-bedroom Drift San José hotel tugs in the direction of tiny and intimate, set back from the ocean in the animated downtown area.

The independent Drift San José is a reasonably new player to the burgeoning Los Cabos tourism scene, laying its foundations only three years ago. Occupying an area no larger than a quarter of a soccer field, the eight rooms, self-service kitchen, modest plunge pool, and broad gravel garden make up a robust base for a design-conscious visitor to San José. The focus on size is especially relevant to anyone more familiar with navigating an apartment block than a micro-village, which is the rough spacial allocation of many hotels on the beachfront. Some extra details are offered which reinforce the seclusion offered at Drift, notably a rooftop seating area complete with a contemplation hammock strung at the highest point of the expansive platform.

Rooms are similarly portioned, leaving enough space for the liberal separation of partners without creating large voids between walls and furnishings. Each room varies in its configuration with bed size and shower-only or shower-and-bath being the two main variables. But the resounding aesthetic and pleasing principle is the use of grey concrete to create all main features of each room, housing brilliantly large windows that look out into the courtyard.

Organic cotton sheets and proud mattresses sit on top of a concrete platform raised several inches off the ground, while bathrooms comprise of a trough-like sink and adjacent seating area, each moulded using the material. Exposed copper pipes pass hot and cold water across the surface, appropriating “industrial” in style not scale.

Guests are welcome to grab their own drinks and snacks from the hotel’s reserves and drop a few Pesos in an honesty kitty, or else bring their own food and handle dietary requirements on the gas stove. The snacks are diverse enough to remind yourself that you’ve neglected chocolate raisins for far too long, and that honey can be packaged with the care of an apothecary.

Though relaxing within Drift’s compound is a delight, not least because it is only open to the wandering public twice per week, its proximity to good restaurants and a vibrant art scene prompts guests to take a more immersive and perhaps frequent dip into San José del Cabo’s local scene. Head to our guide, Taco Training, for notes on where to find good food and coffee, and how to continue your training regime during your stay.

Getting to San José del Cabo is simple enough. Take a communal taxi / van to Area 2 for $14 per person, or grab your own taxi for $50 / 500 Pesos. Drift don’t offer laundry service so make it down the road to Lavendaria y Planchaduria Cabo Express, where a turquoise facade will swallow up your laundry and get it back to you by 12 noon on the same day, if you drop it shortly after 8am.

Rooms start from $125 and can be booked directly at Drift.