The Spandex Story So Far 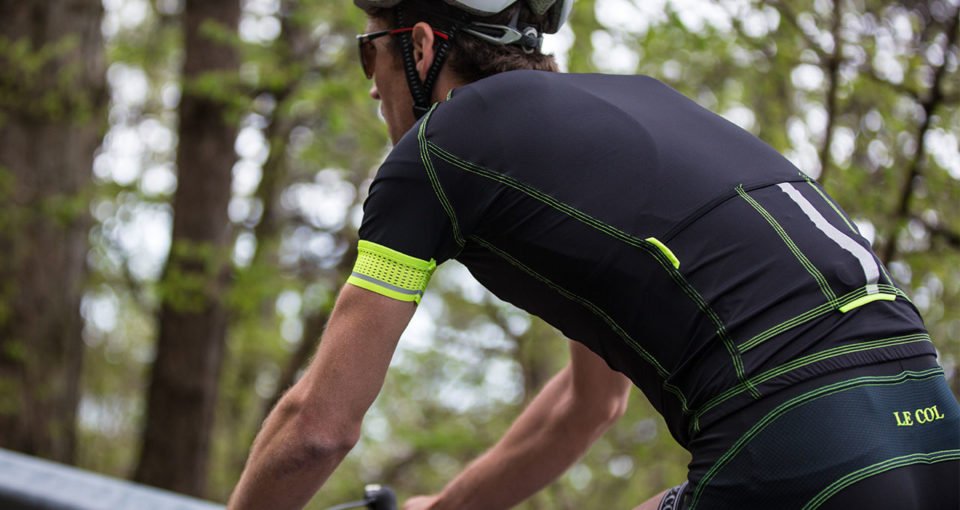 At the beginning of 2014, a friend moved to Boulder, Colorado to take up coding at altitude and commute a lifestyle of competitive triathlon from California to his new home. Jump forward a year and he’s taken up cyclocross and now populates my Strava feed with snowflakes since, yes, cross-country skiing is now another of his off-season sports. But despite these new developments, his cycling jersey still finds its way to the start line of the nordic trails in Boulder, a red ‘Hammer Nutrition’ hue sweeping its way through the snow.

Cross the Atlantic to autumn in London and I’m waiting for a friend outside Sophie’s Steakhouse, a cool restaurant in Chelsea. Just as dusk begins to draw in, a 40-something-year-old road cyclists takes a right at the traffic lights, bearing across the road towards my position outside the restaurant, immediately calling over a beer as he dismounts from his bike.

We get chatting and it turns out Peter has been riding in the South Downs, has clocked over 60 miles during the day and is totally OK with his ex-wife not understanding the reasoning behind buying an £8000 bike (“I mean, at least I’m not overweight driving a sports car.”). Needless to say, Peter is wearing very little – a pair of premium spandex shorts and matching top, all to go with his electronic gear-shifters which glow with metallic muscle.

Admittedly, Boulder and London are two special places where a touch of panache is usually well received, especially when the next trend is being flaunted. But now we’re in 2015 and spandex is all the rage. After the Borat mankini phase, knee-length spandex shorts are a comparatively modest form of dress.

The truth is, skin-tight clothing has been worn by men and women for centuries, but tended to reserve itself for fashion rather than function. Susan Conway’s 1998 Independent article “Fashion: The history of Hosiery…‘ highlights that stocking were common in the wardrobes of both men and women well into through the 18th Century, only changing when men started to moving towards wearing trousers during periods of industrialisation.

It was DuPont scientist Joseph C. Shivers that opened the door to a new era of tightness with the invention of the company’s spandex fiber in 1959. Subsequently, DuPont branded their new technology as ‘Lycra’ and started to market it aggressively, assuming sales figures of over $1.5 billion per year. Incredibly elastic and resistant to body oils and perspiration, DuPont’s Lycra found success in the 1960s fashion, edging towards the sports market as a growing post-war middle class started to consume sports.

Since the Millennium,  a wave of companies  have started to succeed in fitting out a new breed of cyclists with incredibly technical apparel using Lycra. Perhaps the most well known is London-based Rapha, the brainchild of brand strategist Simon Mottram and a company that has developed a cult-like following. Their impeccable storytelling, growing collections of premium gear and array of cycling toiletries are noteworthy. Hop over to Switzerland or onto Assos‘ semi-pornographic website and there’s another impressive tale of tightness.

When Yanto Barker decided to set up cycling apparel brand Le Col in 2009, the conversation about designing apparel had already developed to realm of sophistication and choice. No longer was there a need to strike a compromise between functional apparel and social acceptance.

“We never set out to design Lycra clothing with broad public appeal but rather Lycra clothing that did their job for the wearer excellently and it happens that cycling and wearing Lycra has become part of our modern culture and socially more popular then ever before.”

Le Col have cut out their fair share of narrative too. The brand started production out of Treviso, Italy, also the home to one of the most revered cycling brands, Pinarello. Since launching, Le Col has weaved a story about cycling from their distinguished outpost, while linking into the professional cycling in Britain. Most recently, it was announced that they would outfit one of the 2015’s most exciting UCI-ranked teams, ONE Pro Cycling.

Captured most emphatically by this Spindle Productions clip, the focus Le Col place on blending experiential cycling and articulated gear sets it in a strong position as it makes its way to a new echelon of cycling with ONE.

When it comes to cycling equipment – bike frames, gear sets, pedals, handlebars, brakes – advancements over the last two decades have been tremendous. Compare a professional bike setup in the mid-1990s with an entry level carbon bike today and the technology is comparable. As the detail moves closer to the rider, with apparel brands slicing more aerodynamic, durable and delightful pieces, we’re bound for a second skin society that’s faster than ever.