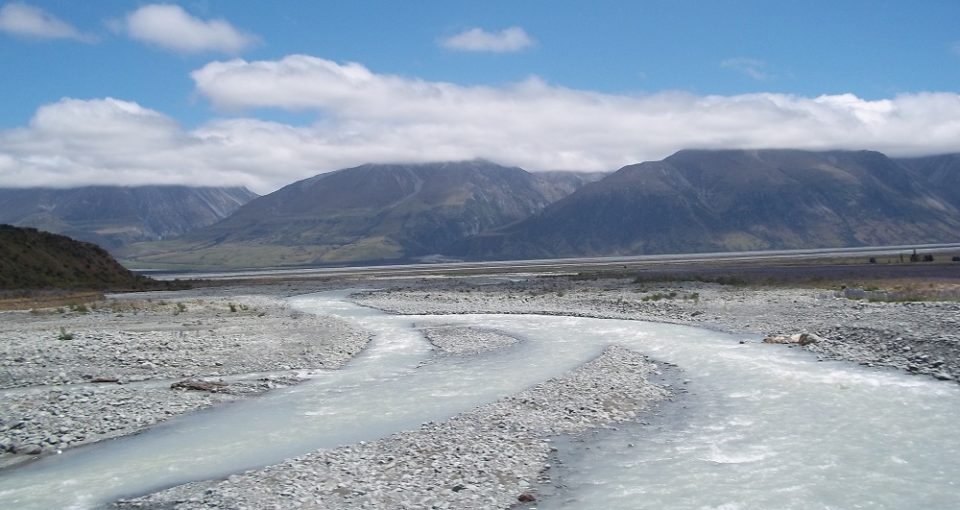 With work staying consistent, finishing around 11am, I continued to explore Methven finding all sorts of new things. One of my favourites being the Methven walkway that took me through enormous pine trees, along beautiful lupine fields in full bloom and over lazy rivers that continued to carry glacial silt down from the mountains, turning the river a bright blue aqua color. I’ve been so happy and content just spending time out in the fields, going on walks or jogs around town and just enjoying the scenery around me. The beauty around here just never ends. I can spend hours and hours exploring new places only minutes away that will have me even more excited to go out the next day and find more.

Last week a couple of guys that work for a swathing company (large tractors that cut crops) had the day off and wanted to do a hike with Ray and I. Their names are Thomas and Dustin and they work quite a bit, so any chance they get to explore, they are just as excited to get out there and do it as we are.

Ray had another mountain in mind to summit that was quite a bit larger than the last and the drive would take us right through the valley where a portion of Lord of The Rings was filmed. I’m not a huge Lord of The Rings nerd or anything, but as we drove through the valley, I could clearly remember the scenes where this valley had been filmed. The valley was surrounded by mountains, with one large hill right in the middle, sticking out like a monument. All along the mountain sides you could see rivers carving avenues down towards the valley until they all congregated into one large river that beamed light blue in color.

This drive was extraordinary. We ended up passing the largest horse drawn carriage I have ever seen. It had six very large, stunningly beautiful horses pulling it as it went down the dirt road. As we passed I thought that if the drive was this spectacular then I couldn’t even imagine how superb the hike up Mount Potts was going to be.

Parking the car a bit off the dirt road, we gathered our gear and began our ascent on Mount Potts. Up and up we went along an emergency access road that was quite easy to hike. Many times we would begin walking backwards just to look at the amazing sight that was behind us as the valley became only more and more grand the higher up we went. This hike was so fantastically different than Mount Somers, that it was hard to think that they were less than an hour away from one another.

While Somers was lush and green with the terrain changing multiple times, Mount Potts was much more barren and rocky but in a picturesque sort of way. As we continued up the access road the few trees and patches of grass began to draw even thinner than they already were. We all decided to spice things up a bit and get off the access road and try and take a short cut up a very steep incline. We dramatically escalated quickly up the loose rocks, trying to dodge the stones that came tumbling down from the guy ahead. We were on all fours trying to get up to the top, gripping whatever we could without losing ground. Finally we hit soil and grass where we were able to get a hold much easier as we were pulling ourselves up the still very steep slant by the base of tall grass.

Reaching what we thought was the top; we looked down and saw the access road that we were once on, continuing up even higher than we were. We unfortunately were going to have to somehow get back down to that access road if we were going to go any higher, but the only way down was by sliding down a precipitous slope that had drop offs and small cliffs. As we looked at it, we weren’t sure if it was a good idea or not to try the descent, but as Ray and Thomas began sliding down, border line out of control, we realized this might actually be quite a bit of fun. Millions of tiny rocks carried us down as we surfed an avalanche of shale and pebbles. Hundreds and hundreds of feet we dropped down towards the trail sliding thirty terrifying yet exciting yards at a time. I couldn’t tell if I was yelling in fear or excitement as I scraped down the steep slope, trying to keep my balance. It was such a rush to be sliding down in and out of control as I plummeted towards the trail, trusting that my feet and legs would balance me well enough to stay as close to upright as possible. That fine line of not knowing whether I am going to be okay or not has become something I find myself craving now and again. After sliding a few hundred feet I began to sort of got the hang of it and was able to catch a video going down this thrilling embankment. It was actually one of the highlights of the hike and luckily nobody got too hurt doing it. 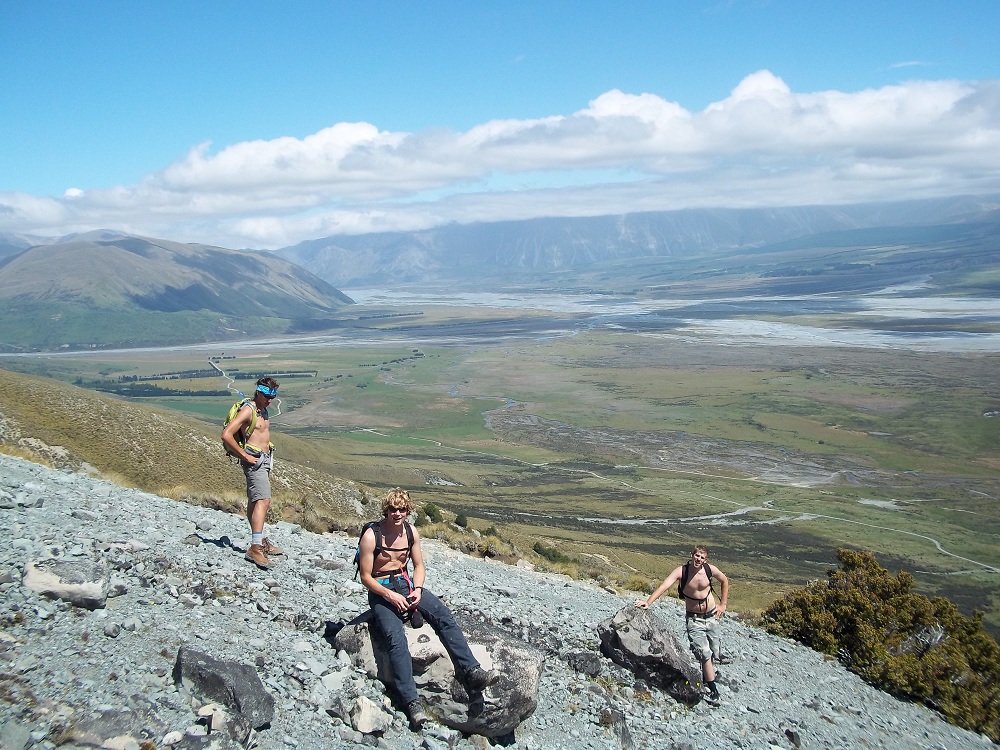 Dusting ourselves off, we all looked back up at what we had basically just fell down in control from and began laughing and high fiving one another. It was quite ridiculous, but definitely a good story to tell the rest of the gang back at the lodge. Continuing on our safe access trail now, we crossed over a few streams slicing through the trail and then as we came around the corner I couldn’t believe my eyes as they lay upon real life snow. Running up to the small patch of snow I grabbed a large handful of it and felt its frosty coolness for the first time in years. I had walked across glaciers on my Mount Everest trek a couple months prior, but not once was I able to immerse myself in snow like I did here.

It was fantastic. It instantly brought me back to all of the cabin trips I had done with so many of my buddies back in college and high school, going snowboarding, building snowmen and making snow angels up in Big Bear and Arrowhead. They were probably up there right now, I thought to myself as we continued up the trail. Those are the parts of traveling, where you wish you had a teleportation device that could just zap you back home so you could tell all your friends and family how much you miss them. But, you got to keep on keeping on, and that’s what I did as we entered into the chilly clouds that dramatically dropped the temperature forcing us all to put on jackets. As we crossed a small snowfield, we began thinking that this hike might have just taken it to the next level on difficulty. Dustin and I had only our tennis shoes with us and weren’t up for cold, soaking wet feet for the hike down, but Ray and Thomas persuaded us to continue a bit further as we began heading up an even steeper slope. Colder and colder it got with every step we took, and then all of the sudden we came to point where the trail was no more. As we looked up at the wet, slush covered rocks ahead of us, we decided that we had had enough adventure for one day and would leave the freezing rock climbing for another time.

We were all quite satisfied with our little adventure, and we were about four hours into it at that point anyways, so we turned around and began our descent. Looking back down at the beautiful valley that only a few hours ago was bright and sunny, was now dark and ominous as we tried to warm ourselves up by jogging a bit down the trail. The clouds were getting dark and the wind began to pick up. We were all in shorts and T-shirts with light jackets; if it began to rain, this would get bad quick. Hoping that we could reach the car before the rain, we upped our pace as we continued down. Seeing the valley now reminded me of yet another scene in the Lord of The Rings movies, however it was the battle scene where it was gloomy and raining where a lot of people died; hopefully not a forewarning ahead.

Making it down in half the time it took to get up, we were relieved to make it to the car despite how tired and a bit beat up we were. As we began driving out of the enormous valley, we talked about how awesome the rock sliding was and how cold it got up on top. Then all of the sudden everything went black and yet again, little Bobby got all tuckered out and fell asleep on the car ride home.