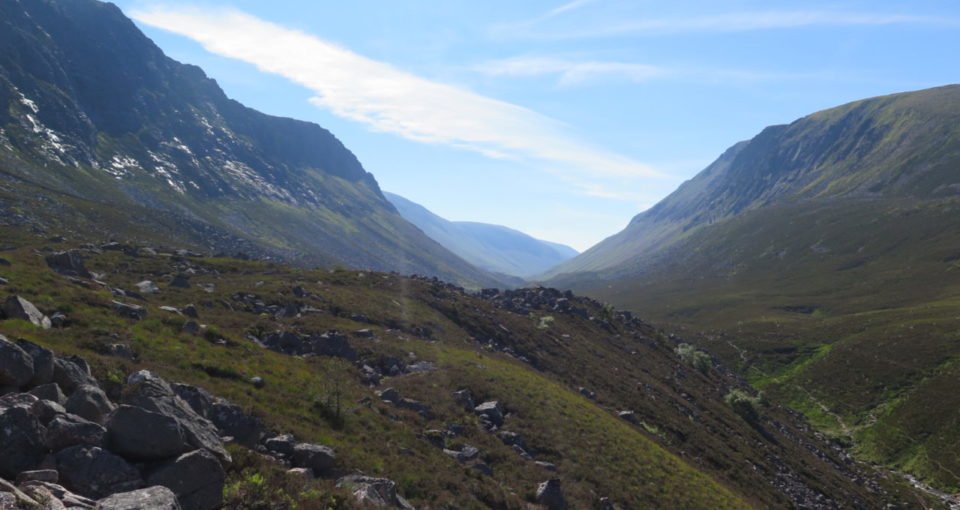 Wednesday 5 August – Carn an Fhidleir, An Sgarsoch: This was one of the few days, which upon finishing I genuinely thought I would never want to repeat, at least not in the same way. Beginning from the National Trust car park near Inverey, the approach was nearly 4 hours (including a fair amount of jogging) merely to reach the foot of Carn an Fhidleir. Low cloud hid the summits from view all day; there was a river crossing both on approach and return; and to add to the fun, a quite substantial bout of navigatory self-doubt cost me 30-45 minutes in confirming my position on the map on the traverse from Carn an Fhidleir to An Sgarsoch.

Thursday 6 August – Carn Liath, Braigh Coire Chruinn-Bhalgain, Carn nan Gabhar: A day of great weather and aggressively fast ascents, which I had brought upon myself with a casual wake-up before having to drive to Blair Atholl and set up the tent. I began at 1pm, had gained the three Munros and was back to the car by 6:15pm.

Friday 7 August – Beinn Dearg, Carn a’Chlamain: An ambitious day, where the traverse between the two summits was as long as, and more undulating than, the approach to the first and the return from the second.

Saturday 8 August – Geal Charn, A’Mharconaich, Beinn Udlamain, Sgairneach Mhor: Windy but clear, I had a very quick day to take in four peaks beside the Drumochter Pass, and with good views towards Ben Alder (one which I would not climb this summer).

Sunday 9 August – Meall Chuaich, A’Bhuidheanach Bheag, Carn na Caim: On the east side of the Drumochter Pass, I made a speedy ascent and descent of Carn Dearg before driving south five minutes to begin the ascent of the other two Munros on the east side of the Pass. These were not especially spectacular peaks, but on the descent there was a good view towards the Dalwhinnie distillery.

Monday 10 August – Beinn a’Chlachair, Geal Charn, Creag Pitridh: This day began in warm, but muggy conditions, with lots of midges. However, whilst approaching the summit of Beinn a’Chlachair the wind had picked up and it had begun to rain. Once I reached the bealach on the way to Geal Carn the cloud level had lifted. However after beginning to ascend again the cloud dropped, the wind picked up and it was raining once more. Five minutes after reaching the trig point, at about 1000m, I had begun the return to the col towards Creag Pitridh. Though I was already in the cloud, my surroundings suddenly became very dark; the wind was rapidly becoming stronger and the rain heavier. I saw the whole sky light up, instantaneously followed by an explosion of thunder in the sky. Realising I had been caught out in a thunderstorm which I hadn’t expected (having not seen a forecast for over a week) my only thought was to head down as quickly as possible. This was difficult in thick dark cloud and moving over a broad, steep boulder-field. After 20 to 25 minutes I had reached the col and at the same time the sky seemed to be brightening up again, with the storm moving northeast, though the wind was still very strong. Conscious that I had had a considerable amount of metal in the top of my rucksack, I must admit that the whole experience had been quite unnerving, especially having heard that 3 climbers had recently been struck by lightning on Snowdon.

Tuesday 11 August – Cairn Gorm, Beinn Mheadhoin, Bynack More: The day began in wet and cloudy weather. This changed as I was descending towards Loch Avon, possibly my favourite loch of the summer. The cloud lifted completely and I had good views from the summits of both Beinn Mheadhoin and Bynack More over to Ben Macdui.

Thursday 13 August – Braeriach: The best day of weather of the summer. There were even windsurfers at 300m on Loch Morlich. I climbed my final Munro of the cairngorms in blazing Scottish sun. The top gave views over to Cairn Gorm, Ben Macdui, Carn a’Mhaim, Angel’s Peak, Cairn Toul and the two from the previous day; a fine end to my time in the Cairngorms.

Friday 14 August – Carn Gorm, Meall Garbh (north), Carn Mairg, Meall na Aighean: Whilst the forecast had promised heavy rain, it was in fact merely very foggy for the first half of the day. On these four Munros I found sheep reaching very nearly the summits of all of them. The cloud was lifted as I was descending from my final Munro of the summer to offer a good view over to a group of peaks which I am yet to climb. A five and half hour return drive to England in the evening to stay at my brother’s meant I could put an end to my record of 16 nights in a row sleeping in a tent.

Some cursory statistics to conclude: