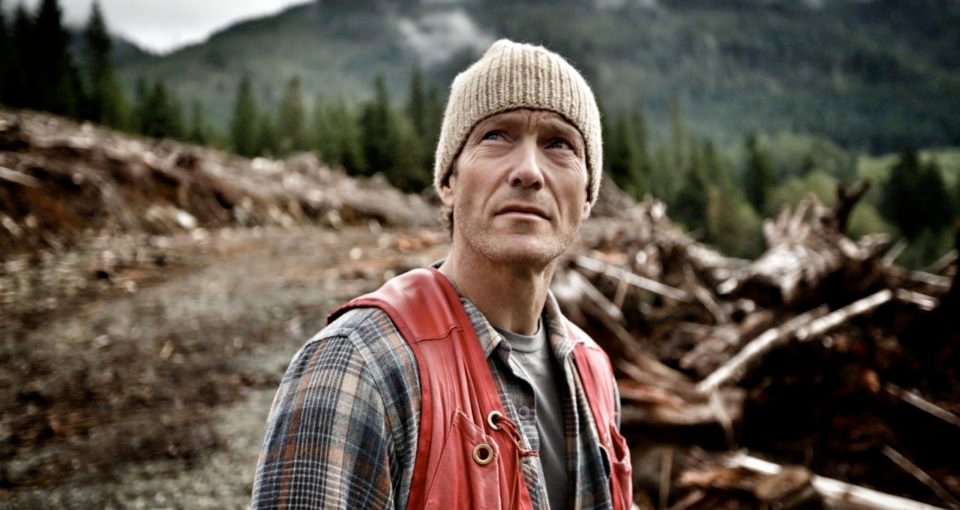 Take yourself to Canada’s Pacific Northwest in this feature-length documentary, a haunting production that covers the splendour and decimation of huge tracts of ancient forest. Inspired by John Vallaint’s 2005 historical account, The Golden Spruce, Hadwin’s Judgement (2015) dives into the myth and fury of road surveyor Grant Hadwin who came to hate the logging industry and his close association with massive ruin.

Though this story of resource extraction touches on the exploitation of local people, its focus on Hadwin’s psyche and eventual “judgement” is most pronounced. Hadwin’s early appearance shows his clear skill in identifying valuable ancient forests and the feasability of logging roads to pass right through them. The image of his own sensitive trail through the forest, knocking on wood and orientating around complicated terrain with effortless control, is at odds with the mechanised logging machines and trucks that he is ultimately paving a way for.

An apt casting of stunt actor Douglas Chapman as Hadwin conveys the suitability of this mountain man to his craft, someone who is able to combine athletic strength with an intimate knowledge that unlocks the secrets of trees, majestic specimens which are then bound to the broader strokes of the international market’s lust for prime timber.

Hadwin’s predicament is well documented in his own letters to authorities, typewritten in convicted prose, adding flesh to the anecodatal accounts from people that knew him. With no family and the virtual isolation of his verdant workplace, Hadwin comes across as a loner with a unique role in discerning the rampant impact of logging.

The coastal archipelago of Haida Gwaii forms a nexus for the story and director Sasha Snow’s narrative, combining local opinion with that of a more universal, if maniac, opinion from Hadwin. Stone carving, beach-farmed clams and the respect for steelhead salmon and trout emerge from the accounts of three Haida Gwaii natives, each living in proximity to a place where Hadwin commits his final act. In its environmental and human afront, the manifestation of Hadwin’s final judgement drives deep into a kind of darkness, into the heart of a symbol that had served to placate Haida Gwaii’s opinion about logging.

Beyond the film’s interplay between human motives, it is no doubt cinematically stunning. Temperate forests shown dripping with life are contrasted with raw acts of violence against them, in effect showing two sides of British Columbia’s millennium-length rythme. The beauty of Haida Gwaii’s untouched fringes serve to support Hadwin’s critique as visionary, setting forth an environmental template that is becoming a matter of urgency in British Columbia and in other countries also bestowed with ancient woodlands.