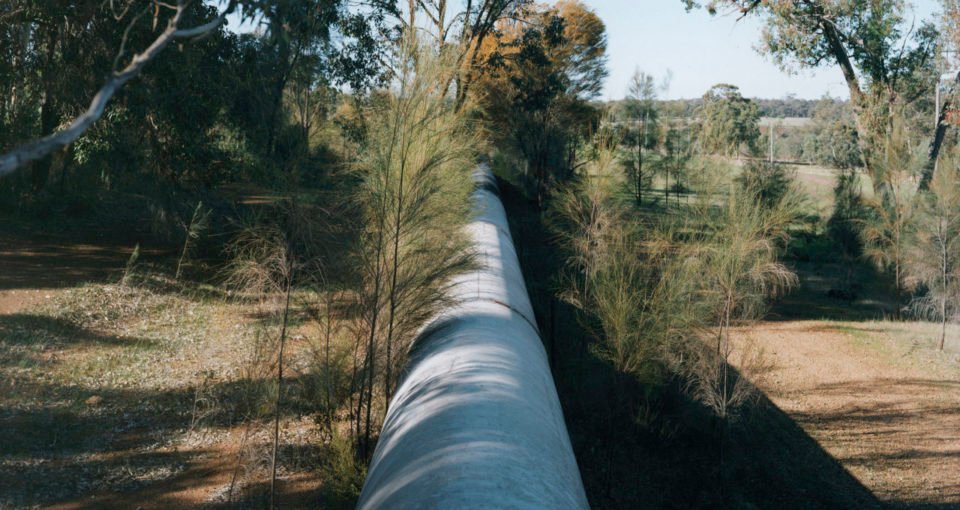 To open 2017, Tokyo’s Gallery 916 hosted Demarcation from Gentaro Ishizuka, a series of photographs that capturing wild places traversed by pipelines. Leaping through areas of oustanding beauty, the juxtaposition of refined geometry and rugged outdoors is striking.

Ishizuka first came across pipelines during a trip to Arctic Alaska in 2003, where 1280km of Trans-Alaska Pipeline System serves as a significant landmark. He then began to explore the use of the same infrastructure in other countries, including Iceland, Australia and Austria, which all feature in Demarcation.

Notions of an industrial object thrusting through plumes of steam, between jagged rocks and propped above lush grass unfold into a contrasting set of images. To Ishizuka, the role of the pipeline and the naming of the show emerge from the idea of a pencil drawn across a blank piece of paper, which creates a geometric significance of division, where before there was none.

Despite the appearance of a blank space, the direction of pipelines is largely defined by the landscape. In his photographs, pipelines fumble towards their termination, feeling their way in the fulfillment of their purpose in the ultimate balance of distance and gravity. Ishizuka comments on the composition of his pieces with reference to the scenes before him, “Rather than wanting to look at the pipeline objectively, I visit various lands with the desire to see the unique climate of the land that can be seen through the pipeline.”

The metallic gleam, clearly functional, occupies a space uninhabitated by humans, a “no man’s land” which allows for a liberal interpretation of the images. For Ishizuka, the cylinder provides an interesting structural comparison with nature, citing Paul Cézanne’s view that nature is made of cyclinders, cones and spheres.

“In addition, I think that the pipeline is a motif that inspires viewers to various things. Some are environmental problems or something, others are energy problems, something is sexual, something is a feeling of movement.”

Despite their prevalence in industrial infrastructure, their actual dimension, capacity and purpose is still less known by the public. Since the Trump regime has resurfaced the debate over the Keystone Pipeline, Ishizuka suspects we’ll be learning more about them and how they create a yardstick for wider cultural values.

Aside from their individual appeal, the collection that makes up Demarcation includes photographs taken with a large-format camera over 12 years. Placed in the large space on concrete walls overlooking Tokyo, the Ishazuka’s efforts are discernable.

It’s easy to overlook the arduous nature of driving and hiking, but this is the trial that Ishizuka admits to enjoying. This moment of flow is self-fulfilling, when the photographer can acknowledge that choosing his line of work has been positive.