From Joshua Tree to Kentish Town: an interview with The Glitch Mob 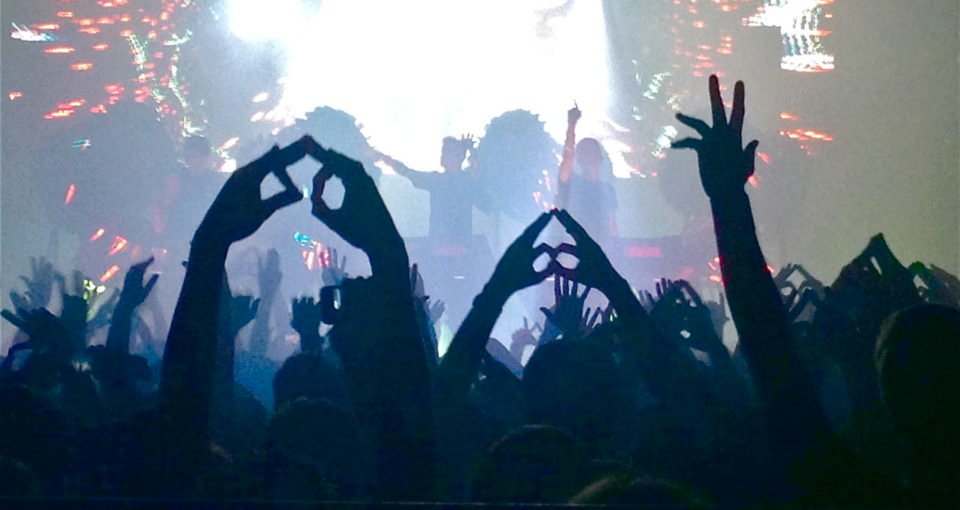 In the aftermath of the European Elections, news of the overland arrival of a group of musicians calling themselves “The Glitch Mob” was bound to cause some kind of stir. But when the trio met their extended group of mobsters in Kentish Town’s Forum in London, demonstrations of welcoming euphoria bedecked a packed-out venue for their show.

Since releasing their debut album “Drink the Sea” in 2010, Glitch Mob DJs Justin Boreta, Ed Ma and Josh Mayer have carefully fostered the growth of a hard-core international following. The group’s bold style has inspired thousands, super-charging revelers with a new fuel for taking on challenges.

“You know, the GoPro, active sport, ‘achieve-the-goal’ videos started appearing,” Mayer starts. “It goes along with our music. We didn’t necessarily go out and plan to do that, it’s just what started happening. And then it started to inspire us to further our music in the grandiose, epic sphere of sound.”

After touring “Drink the Sea”, the group returned to California to take stock and refresh in nearby Joshue Tree, a nature retreat 100 miles outside of their base in Los Angeles. There in the middle of the desert, they started crafting their latest album, “Love Death Immortality”.

“Going out to Joshua Tree was there to hit the creative reset button,” Ma explains. “We’d been on tour for about two and a half years so we went out there to just go somewhere that was outside the city, in the middle of the desert and away from it all. To get into a completely different headspace and begin to stir the creative pot on what we thought “Love Death Immortality” might become.”

“And we started a bunch of sketches out there, a lot of them we didn’t use, but the main one we did end up using was the one that would eventually become “Our Demons”. But it was good to just get out there, to walk around the desert, to connect with Mother Nature and with each other. To start something new.”

During the time in Joshua Tree, thinking about the direction of “Love Death Immortality” meant returning to a basic set of sounds and instruments to allow the new creative process to breathe.

“When writing songs on a computer, it’s easy to get lost with the infinite number of options,” Boreta comments. “So we reduce the palette to a set of drums and bass and focus on the song writing and the message, like “this song feels like heartbreak”, or “this song feels like taking over the world.” So we’re really focusing on different feelings that come out.”

Boreta, Ma and Mayer have been creating music together for seven years. Over this time, they’ve come to figure out where to push and pull, where to compromise.

“It’s a trust thing as well,” Boreta explains. “If I’m like, I really like that one sound that goes “hrrrr” and they both think it sounds terrible, I’m OK with that. I trust them, so they’re probably right. We also have this scorched earth policy. So when we’re writing music and it’s going in a certain way, we don’t really hold onto the way it once was, it’s very organic. It’s about compromise and letting go.”

“Not being too married or attached to anything,” continues Ma. “Knowing the end result probably won’t be what you initially imagined the song would be. Letting the song be what it’s going to be and take a life of its own. At this point, it’s beyond just being best friends. We’re band mates, we’re creative partners, we’re business partners. The bond is far beyond that of just a best friend, or even a relative. It’s so entwined. It’s on a different level.”

But there’s a sense that The Glitch Mob created space for this special internal bond, that they’ve sculpted a group mentality around their own principles and metrics for success. Because the three operate under their own label, Glass Air Records, they are privileged with more freedom and creative mobility that most artists surrender earlier in their career. This perhaps explains for their unusual harmony and zen-like appreciation of each other’s contribution to the collaboration.

Answering to the value of an independent label, Boreta explains, “For us, when we think about success, we just get to make music and do what we want. There’s not a financial incentive besides doing what we want and making music. At this point we don’t have to answer to anyone, there are no people in a giant building in a suit saying you can’t put a samurai on the album cover.”

Taking total control of the creative process has helped the The Glitch Mob develop a revered status in social media as “everytime-replyers”. When they were just starting to build their following, they even made sure to include custom lighting, and make the necessary trips to Home Depot to make this happen.

Their organic growth has also allowed the group to keep grounded and grow in relation to their actual fanbase.

“Because we’re not signed to a label, there’s nobody that’s given us a big chunk of money so we’ve never hit this peak of knowing what it’s like to be rich and famous,” Mayer highlights. “We’ve always just been musicians that get paid x amount of money for a gig, split it and go home and figure the rest out.”

Despite this dreamy rise to popularity, three are careful to point out that their way is not necessarily “the way” to go for musicians, but it has worked for them. They admit that for super-artistic musicians, a very small amount of fan interaction is fine, whereas for someone like Steve Aoki, the artform of communicating with millions of people is a major part of the skill.

The Glitch Mob are now back in the US to continue with their North American summer tour. In August, they are due to fly back across the Atlantic to assess the situation in Europe with more touring.

Learn more about The Glitch Mob’s music and tour dates at theglitchmob.com.