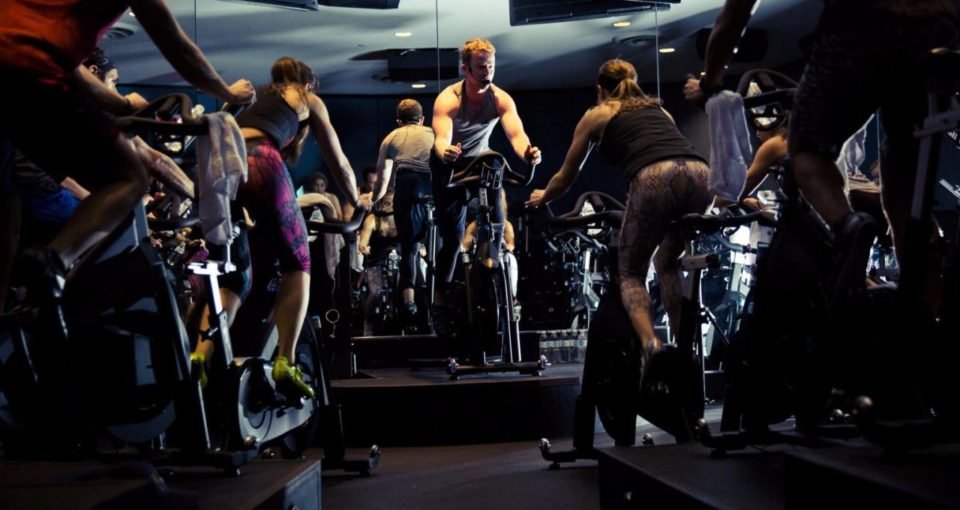 Even the most timid class-goers will be at ease on arriving at Flywheel Sport’s indoor cycling studios, where a team of hosts welcome attendees like old family members. Flywheel’s spinning sessions take on a more serious tone when lights are dimmed and classes pick up steam, offering a new workout type in major U.S. cities, and another contribution to the realm of boutique fitness.

Intimate hospitality is a signature characteristic of a SoulCycle onboarding, emphasised by founder Ruth Zukerman (formerly SoulCycle). Flywheelers are provided with cycling shoes as part of the class price, but those with their own should bring cleats compatible with with LOOK Delta and SPD pedals. Towels and water are also available for use within the class, and lockers require only a four-digit code, so there’s no need to bring your own padlock.

The loud music and flashing lights of Flywheel’s cycling studio shouldn’t distract from the fact that the bikes are fairly decent. Though bikes are technically spinning machines, frames are fully adjustable and the resistance throughout the revolution is consistent (Flywheel service their bikes well). Flywheel’s proprietary handlebar displays include four numbers which relate to resistance, speed (cadence in revolutions per minute), as well as real-time and accumulative efforts. Resistance can be adjusted via a digitised knob on the top tube – not the most convenient location, but a tactile dial nonetheless.

During the session, Flywheel’s coaches encourage the pursuit of two key stats, resistance and speed. Each coach has their own style, employing captions like “Be Vulnerable, Don’t Risk Failure” and “Hard AF [as Fuck]”. Regardless of what you think of their technical ability in sports training, coach motivation and the hammering beat of music are enough to prise any Manhattan away from the grind, at least for a few minutes. And Flywheel coaches are probably better at bringing together music playlists than most of your mates.

Flywheel sessions include the combination of hill-induced climbs with the varying of resistance and cadence to route the emphasis through the legs and cardio. Class types are either “POWER” or “METHOD”, with the former offering the variability of 30-minute sessions to complement the 45-minute and 60-minute. Sessions are long enough to create an artificial storm with Flywheel’s studios, so bringing the towel to your bike is almost a requirement.

A pulsating out-of-saddle to in-saddle alternation forms one mode of cycling at Flywheel, which will confuse any serious cyclist. Feel free to ignore this and prioritise time out of the saddle when others are doing their taps forward and back. Additionally, the class’s latter sequences include the lifting of iron batons weighing 1kg each. These upper body exercises are bizarre, more representing the Makarena dance than any correlative cycling motion.

Part of Flywheel’s c. $35 class rate can be justified by private shower and pampering facilities located on site at each venue. Though most class attendees will be happy to wander the city streets damp from their workout, know that making the most of a shower is no compromise – small towels are provided as well as body wash, shampoo and conditioner, even accompanied by body butter, all lemon flavour. Hair dryers, deodorant and cotton buds are available in the communal area that connects the shower rooms – an essential retreat for those who struggle to cool down in a stuffy cubicle.

Flywheel Sports has opted into both the pay-by-class or grab-a-membership models. Some restrictions include the release of classes at 5pm Sunday for the following week. Also, purchasing multi-visit passes is often linked to a certain city, so don’t go buying 10 if you’re in New York for a few days – they’ll expire before your next visit.

Comparisons with SoulCycle and the aesthetic of Equinox and Barry’s Bootcamp are inevitable but for a solid cycling session in the middle of the city, Flywheel is a sound choice.

Head to flywheelsports.com to find venues, and download iPhone and Android apps for the best booking and data experience.