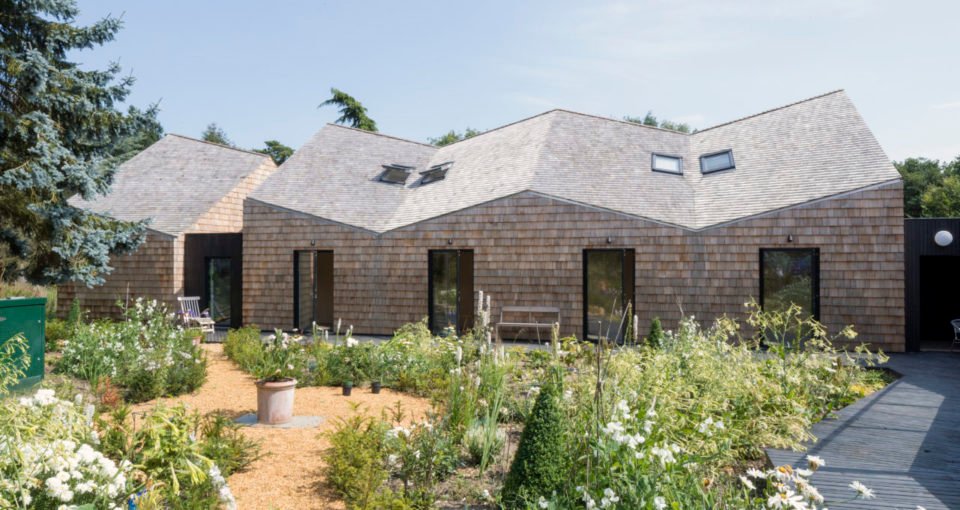 The countryside hadn’t quite emerged from East Anglia’s winter by the time I arrived at Five Acre Barn in mid-March. Yet set against the bleak winter landscape, and a couple of dreary days to dampen the backdrop, the slanted roof and cedar shingle exterior of one of Suffolk’s most recent builds was a sight to savour. Opened in 2017, Five Acre Barn is a chic 5-bedroom hotel, straddling the bed and breakfast and boutique hotel domains with an acrobatic poise mirrored by its jagged lines. This awkward positioning is itself refreshing, and the result of the intimate handiwork of Bruce Badrock and David Woodbine, London escapees and recent graduates to the world of hospitality.

Five Acre Barn, so named after the size of the plot of land that encompasses it, was purchased by the former Royal Navy Hydrographic Surveyor and NGO accountant after some successful DIY in their South London property. Yet the agile hop into a full-blown build, restoration and furnishing project marked a new frontier, not least because the intention was always to launch a commercial venture. Surrounded by a garden filled with mature trees and bordered on one side by the Hundred River (stream), Five Acre Barn has surfaced on the top rung of modern design, completed on an L-shaped footprint on a £300K budget.

Beneath the property’s slanted roof are five bedrooms, four with a mezzanine level and a final room at the end of the building. Rooms are connected by a wide corridor that stretches the length of the building, a bold welcome signals the focus of polished concrete flooring and plywood interior (photo above). While most hotel corridors are passed through without much notice, the high roof at Five Acre Barn is a looming feature in itself, reaching over 15 feet to the highest point of the building.

Succeed in getting beyond this distraction to find the five bedrooms decorated to an equal degree of precision, while being absent of clutter. Skylights flood rooms with a brightness even on a gloomy days, revealing the carefully selected oak bed frame and small vanity area at the mezzanine levels of rooms #1 to #4. Designer chairs place an emphasis on stillness, while brass hangers on a steel-framed unit encourage some diligent organisation. While the bathroom to #5 differs slightly because of its stand-alone bath, all rooms are kitted out with products from Bramley, inviting a liberal scoop of bubble bath and the ceremonial donning of a dressing gown afterwards.

In the end, the degree of detail is no surprise. Though Badrock and Woodbine hired London-based architect Blee Halligan to model the building, most of the interiors were chosen, and in some cases reconditioned by the owners. What lessons they learnt from their Peckham restoration were easily repeated in the tiling and plumbing work. The hotel also demanded the installation of a solar PV system with 16 panels, responsible for a Year 1 yield of over three megawatt hours. An additional air source heat pump is used to supply hot water to the property, supplemented by electricity from the grid.

Five Acre Barn’s robust infrastructure is matched by the quality of its breakfasts, served up with local ingredients in the shape of a Full English with mushrooms and black pudding. Local honey, eggs and apple juice are three cornerstones to look out for, and if you manage to bring a full appetite to breakfast, also sample the yoghurt and berry combination. Tea and cakes are available in the afternoon, with fresh coffee and a cafetiere stationed in each bedroom. 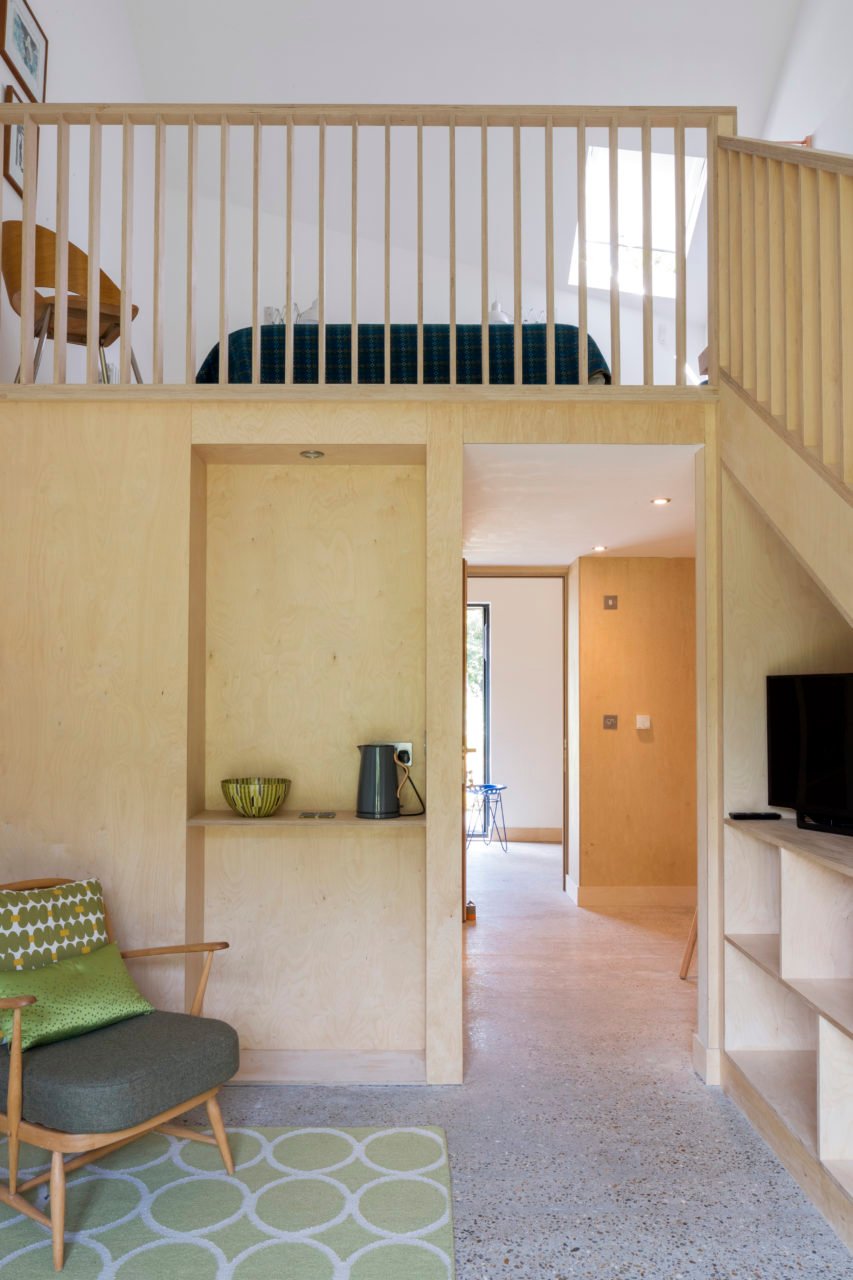 Despite the comfortable setting of Five Acre Barn, it is well worth exploring the surrounding area. Dinners aren’t provided, so walk along the pavement for half a mile to get to the local pub, The Parrot, where a wide selection of healthy dishes can be ordered to the backdrop of local chatter. Take a moment to note the astounding record of Mark Adamson and Paddy Rousseau who have been taking the Suffolk Coastal Petanque Pairs League by a storm.

Other renowned locals include George Orwell and Benjamin Britten, the latter being best known for introducing the area to Classical music. In the 1960’s, the composer pioneered the Aldeburgh Music Festival, eventually hosting the world-renowned events out of Snape Maltings, a converted malt factory that now meets the highest standards for a musical venue. Since its opening in 1967, the building has hosted famous musicians from all over the world, pulling in several thousands of visitors each day during June.

Wander into Albeburgh itself to find a quaint seaside high street with a mix of old stores and newer openings. A second-hand bookstore, Reed Books, stocks a range of vintage books, classics and several boxes of CD-ROMS, presumably passed down from the town’s esteemed locals. Ice cream parlours are numerous, with healthy snacks and a seafood menu at The Market. Grab coffee around the corner at East Coast Cafe.

Visiting Five Acre Barn in the winter exposed the broad depth, with trees and naked fields unfolding into the background. Birds had just returned from southern latitudes, no doubt confused by the Beast from the East and the snow that fell two weeks later. These are dynamic times for the Suffolk coastline and Five Acre Barn, where fresh ideas are budding.

Five Acre Barn’s verdant extends into a network of trails which connect small woods, waterways and the open landscapes of Suffolk. Though there is no parkrun nearby and zero hills to speak of, the area is well chartered by athletic locals and ambitious open water swimmers.

Those looking for a flat trail run should head to the bottom of the garden and pass through the small gate, immediately taking a left over the short footbridge that crosses the Hundred River. From here, you’ll see St. Andrew’s Church – head through the graveyard to connect with with the venular network of trails linking together the Suffolk Coast. A broad wetland might be one waypoint, before taking a left at a four-way junction to link with a disused railway that cuts south to connect with the northern edge of Aldeburgh, arriving 8km after leaving Five Acre Barn.

A simpler way to play your run would be to cut to the coastline, then head along a tarmac trail that runs parallel to the pebble beach between Aldeburgh and Orford Ness to the south. Orford Ness nature reserve is a stark part of East Anglia, formerly used to test the pioneering post-WW2 efforts in nuclear technology. Another site of technological significance can be found the other side of Aldeburgh – a radio surveillance site on the spit that banks the River Alde, a little far to get to on-foot from Five Acre Barn.

Cyclists can make the most of roads immediately out of Five Acre Barn, though the area’s flat terrain and narrow lanes don’t make for relaxed riding. Saturday rides and the occasional time trials can be sourced through Aldeburgh’s local cycling club, Plomesgate. Indoor cycling can be found through another institution, Mint Fitness, which is adjacent to Aldeburgh RFC, half a mile from the high street.

Swimmers have a more peaceful time of it, either off the coast in the safe Dunwich and Shingle Street beaches, five miles to the north and south of Five Acre Barn respectively. Alternatively, swimmers can drive to the meandering River Waveney and entry points at Outney Common, Ellingham Mill and Locks Inn.

Whatever you plan to do with your athletic pursuits, think about making the most of your spacious room by booking in a treatment with Aldeburgh Mobile Massage. They offer a range of treatments including sports massage and Thai massage, but make sure to book as early possible since owner Heather operates alone.

Five Acre Barn is a 90-minute drive from London, or a 2-hour, 1-stop train from Liverpool Street to Saxmundham. For more information on booking and rates, head to fiveacrebarn.co.uk.