Notes on Festka: Born in Prague, Made in Czech Republic 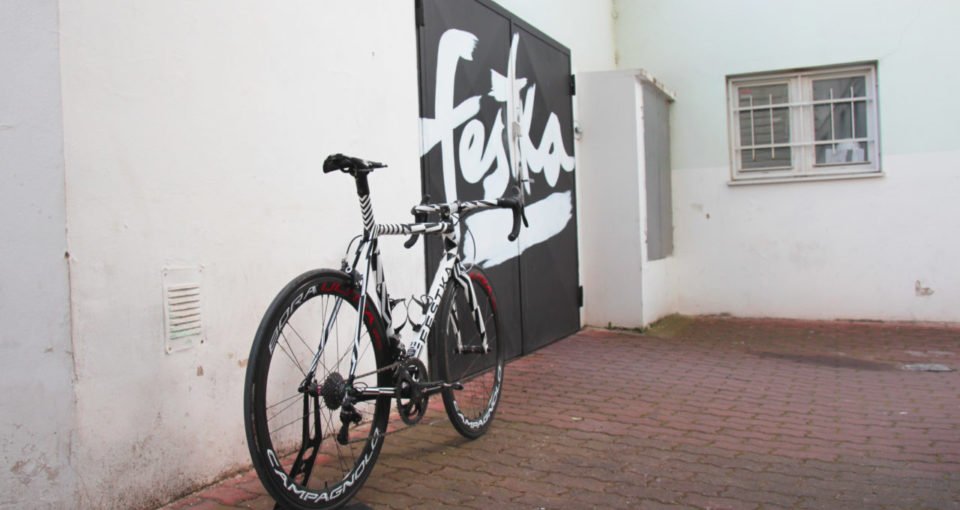 In a smart, leafy neighbourhood in the centre of Prague, a corridor coloured by a tired teal plastering funnels your focus toward a twin set of black steel doors, F-e-s-t-k-a slashed and underlined in white paint across the pair. Since 2010, Festka have carved a reputation from this outpost using titanium, carbon, and steel. Delicate flecks of paint and welded joints unite the materials and brand them unmistakably.

By the time I arrive at Festka’s headquarters on a warm Friday evening, a stream of middle-age professionals have already started to swing by to collect their serviced and fortified rides in time for the weekend. Two customers stand well over six foot tall, sporting large frames that suggest custom or at least discerning.

Among these movements, Festka co-founder Michael Moureček is stationed at the helm. The workshop office has virtually no office chairs and zero desks; he’s manning the coffee bar. Dressed in jeans and a dark grey tee, Moureček is several moods more relaxed than the former pro cyclist sporting company lycra on the brand’s website.

Instead, Moureček commands a calm among the activity. A phone call comes in from a colleague who he advises on childcare for the weekend, while his free hand ratchets up the espresso machine between handling a cash payment from a client who is inching out of the store with a finely tuned Pinarello. It’s this management of the intimate matters that has blossomed scores of relationships for Moureček and his co-founder Ondřej Novotný. In many ways this balancing act mirrors the way Festka has grown and continues to work — a company that resembles a family unit with immediate relationships, Moureček and Novotný positioned at the fountainhead.

Ever since the pair started to build their custom frames in 2010, their approach with an eclectic group of suppliers and clients has been direct. When they wanted to get hold of the best carbon tubes, they went straight to the Czech Technical University in Prague to search for the most respected professors and their star students.

Finding a trusted PhD in carbon tubing came as the result of one conversation, then steel and titanium experts followed suit. As for welding, Festka contacted Morati who made some of the best bike welds in the 1990’s, but now have a business that focuses on the aeronautical market, tapping into a collection of talented engineers who still want to work with down tubes.

Perhaps it’s this approach that can only emerge from a long era of isolation and pragmatism, and the accompanying faith that domestic talent would be enough to garner respect in the challenging world of custom frame building. What Moureček and Novotný noticed in their tours around the Czech Republic and Italy was that no one factory had it totally under control. Some would know everything about geometry but nothing about paint. Others wanted to make tubes but showed no interest in doing the welds.

Still, once Moureček and Novotný had orientated a kind of production constellation pinned to the corners of their homeland, they put their client at the center of every production cycle. For a company that produced 200 frames in 2015, maintaining the trust of clients requires a formidable charm and operational efficiency when it comes to thinking about producing a pristine frame across multiple production sites on time. For instance, to get the design as right as possible, Festka will let a client test carbon, steel and titanium combinations for up to six months, so they can come back and give informed feedback on which kind of stiffness and responsiveness suits their riding style. The more Moureček talks about Festka, the more it becomes clear that the bike is merely symbol of a client’s growing interest in cycling. Referring to a client who had passed through the workshop to collect his ride during my visit, Moureček recalls the sales pipeline.

“I would go with him two times per week for the ride and I started to teach him how to use this bike, how to be a good rider, not a good racer or anything. Just how he can enjoy cycling. At the beginning he was very different. He would just go five times per week, find one climb and come back. He had no enjoyment in the ride. Now he has discovered how it is to ride with other people. How many friendships you can get if you help someone with punctures or whatever. Now the cycling is more socializing. Now he gets to know the mechanics, other people from the industry, and we opened the cycling world up to him.”

There’s no doubt that Festka’s frames are coveted. From their technical specs, such as a zero degree carbon lay for stiffness and strength, to their immaculate welds and paint finishes, they are trophies in themselves. In a city which until recently formed a key outpost for communism in Eastern Europe, there’s not only an appreciation of building a quality and complete product, but also an admiration for a lifestyle of meaning. Festka has started to export this mentality in the form of its “Festka Societies”, communities that are being established through key ambassadors in over a dozen cities across the world. Vienna, New York, Bangkok, Singapore, Kyoto, Miami and Austin, Texas are all intended hubs. For the brand, a key goal is of course to sell more frames, but control is minimal  –  Moureček is excited to see where ambassadors take their Festka Societies.

This is probably a good thing. In a country that continues to dispute its very name, Festka is only just starting to discover how its brand is interpreted by its domestic and international clients. The following morning I ride with two Festka owners who lace a the route via a cafe and a few sections of pristine tarmac a stone’s throw from the city center.

After muscling up a billiard smooth climb, we grab drinks at the cafe, located at a former paper mill at the base of a popular climb. A stream of cyclists steadies themselves for the climb while we sip, including national champion Petr Vakoc and a woman in full burka riding a time-tested mountain bike. Just as Festka snaps titanium to carbon, and matches PhD scientists with graffiti artists, there’s a blending process going on at Festka, enough to squeeze, bend and perfect the finest rides in the world.

For more information on the brand, visit festka.com