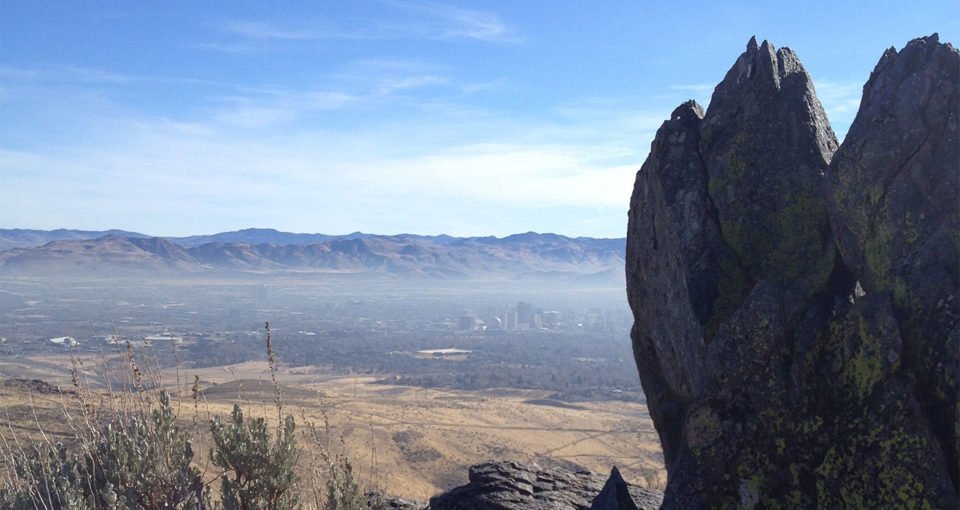 Thoughts of Reno, Nevada are usually dominated by visions of cheap casinos, diesel trucks and gun racks.  And after living there for over two months now, I can tell you that these images of Reno are exactly as you imagine.

I can also assure you, however, that the trashy night life and redneck pickups are only a small part of this truly amazing city.  Disregard the fact that you are located less than 1 hour from Lake Tahoe, one of the world’s most popular outdoor meccas, and Reno is still an undiscovered paradise for the athletically minded.  Located at 5000 feet in elevation, Reno receives only a fraction of the snow found in the Sierra Nevada Mountains, which allows you to optimize the beautiful terrain for running, mountain biking, and road cycling almost all year round.

For a city with a population of well over a quarter million, Reno still manages to maintain a small town feel; they really weren’t joking when they dubbed it “The biggest little city in the world.”  From anywhere in the city you are never more than a 10 minute drive from a sweet trailhead, where a mixture of single track and fire roads weave endlessly across the high desert landscape.

Coming from the densely forested regional parks of western California, I traveled to Reno fully expecting complete and utter disappointment with the “urban life” of this large metropolis, and I reckoned that if I were to find any running trails they would be a long straight flat fire road through the desert.  The first night I arrived, I slipped on my snazzy Zoot running shoes, put the flashing casino lights at my back and started running towards the hills.

To my surprise, less than one mile from my house I came upon the Keystone Canyon trailhead.  (From the 80 freeway take Keystone Exit, go North ~ 2 miles.  The parking lot is just past McCarren Road). Under a full moon I switched on my headlamp and headed into the desert.

The road quickly forked, and forked again and as I have the habit of always seeking the narrower path, or the trail that goes up more steeply (i.e., I look for the most fun trails) I soon found myself climbing a steep single track up around a desert knoll.  From the top, I was greeted with a scene that could not be described as anything less as gorgeous as I looked down over the city lights nestled into the Western edge of the Great Basin surrounded by dark snow-capped mountains that extended for miles in almost any direction.

I knew immediately that this city deserved far more than it received credit for.  Not to say that off-roading and shooting stuff isn’t fun (I soon found out that it actually pretty awesome, but this is another story altogether) but I was starting to see Reno in a completely different light.

The next day I continued my adventure choosing a different trailhead a little farther West that also opened up into the expanses of Keystone Park.  With such an enormous trail network, I figured I could run here every day and never get bored.  I was right.

After climbing to the top of the ridge, the trail flattened out and was bisected by single track labeled by a small sign post as “Halo Trail”. As an added coincidence, and the sign of awesomeness, Beyonce’s “Halo” was actually playing through my headphones at that very moment (I know, that’s somewhat embarrassing) but I took a hard left and dashed down along what I would find to be one of the most exciting trail runs of my life.

Now, where most trails are designed to go from point A to point B in a reasonably direct manner, Halo Trail was either designed after the Superman Rollercoaster or the F1 race track at Monaco, with its only purpose being to generate the G forces required to get your heart racing and glue a smile to your flapping gums.

Before you realize it, you are charging flat out around the intricate turns up and over the subtle desert topography through, over and around rock formations, down steep descents across dried creek beds and back up the other side.  Yet again, I found myself many miles from home as the sun was setting, but you are never lost around Reno.  As darkness fell, I headed towards the casino lights leaving a small trail of dust fading into the moonlight.

A few weeks later we had one of the first snow storms of the season, and when I woke up and gazed out the window whole city had turned white.  It is incredible how the entire landscape can transform in a matter of hours.  Perhaps it is completely normal, and I am just not used to living where it snows, but either way it was breathtaking.

That day after work I was headed to Mayberry Park in Southern Reno for another running adventure.  Conveniently, the trailhead shares a parking lot with a Patagonia outlet, but I decided to forgo the upgrades to my winter running attire and headed for the trails.  Mayberry Park kindly gives you the option of following the snow covered banks of the meandering Truckee River, or crossing over the Steel Bridge towards higher ground.  The snow across the river was just starting to melt exposing the trail below which offered an enticing challenge, so it was off for another escapade.  What a perfect day for a run.  It was not long until I was scrambling through the snow across a frozen creek making my way towards the exposed fire road above.  From there I was able to traverse the mountainside as the road dipped back and forth through the inlets into the hillside.  It is just hard to complain about a day like this.

Reno has continually impressed me with its unique style of high desert running.  It truly is an outdoorsman’s paradise and there’s nothing wrong with making the 40 minute drive to Lake Tahoe for some of the best snowboarding in the world, just don’t forget that there’s more to Reno than you might think.

Craig Fellers is now based out of Santa Cruz where he is the owner and optometrist at Midtown Optometry.