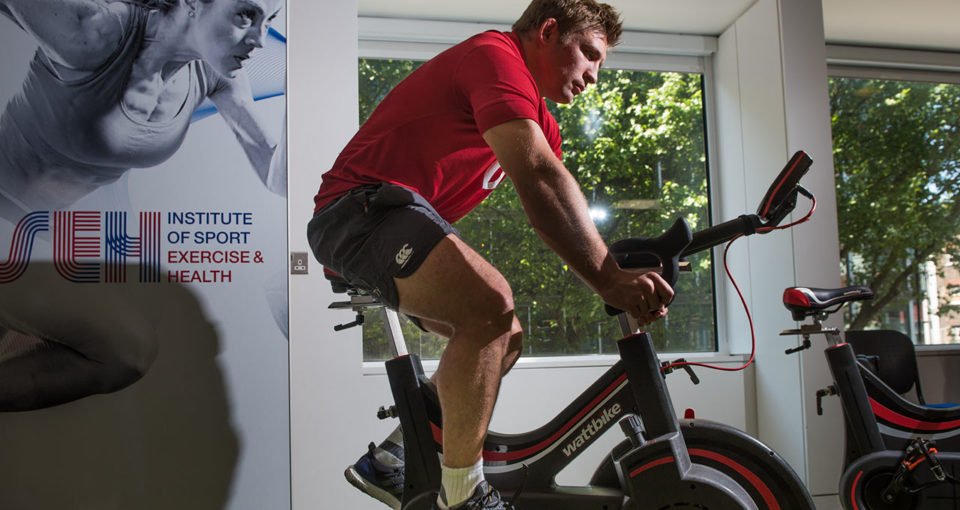 If England’s motorists have grown to resent the skinny, pulsating rears of cyclists wearily straying from the curb, they’re about to come across a new scale of problem. In sports where formidable girth and size actually help, there’s a growing trend to use cycling as part of a structured training programme. Rugby players, rowers and footballers are carving out their own version of two-wheeled fury, invading a space formerly occupied by a much more slender bunch.

At least for the moment, this new breed is happy to confine their cycling activities to indoor gyms using stationary bikes. Among this crowd, the requirement for sturdy, reliable bikes also trumps any need for a lightweight frame, distinguishing their priorities from regular cyclists for whom finesse is normally compulsory. In rugby union, professional forward Tom Youngs is well known for warming up on the sidelines using a hefty stationary bike before representing England.

If elite athletes outside of cycling are starting to introduce the sport’s movements into their training, stationary bikes must have at some point evolved from the machines usually found in the salons of psychedelic spinning classes. For over a decade, the concept of the spinning events at local gyms have become so popular, that some gyms dedicate their entire floorspace to the activity. But for professional athletes, superior pieces of kit like the 60kg Wattbike provide a more rigorous reason to be on the bike – to get stronger.

Beyond simulating the motion of cycling, the best machines capture an incredible amount of detail about power output and consistency through the entire pedal stroke. Wattage provides a very honest metric for power output, while graphs displaying consistency through the stroke can be used to identify weaker muscles. With this knowledge, analysts are much better positioned to track progress, prevent fatigue and ensure relevant resistance exercises are being practiced as part of conditioning.

The success of watt-based bike machines hasn’t been contained to professional sports, even challenging some of the nation’s most enduring fitness regimes. The British Army have embraced the machine for their Alternative Aerobic Assessment (A3), a ten-minute test designed for troops who are medically downgraded.

Fitness assessments for recovering personnel used to consist of a 1.5-mile running test which, along with press-ups and sit-ups, would provide data to inform instructors about a recovery programme. Stationary bikes now offer a more stable environment to accurately sample a recovering soldier’s engine, and could apply just as well to soldiers in active service.

For cyclists, thinking about hopping on a stationary bike and training to a defined programme also lends itself to proper time management, a skill that is often lacking in endurance sports. As well as benefitting from detailed power measurements and stroke consistency, body position can be improved, output thresholds established and nutrition intake benchmarked.

Those looking to fit in training and recovery around a a busy work schedule can take inspiration from Tamara Taylor who recently captained England women’s rugby union team to World Cup victory in 2014, while working a full-time job. She uses indoor cycling as an essential part of her training to ensure she maintains a strong cardiovascular base around the stresses of working life.

It’s only a matter of time before scientific bikes offering instant, full-revolution power data become regular fixtures in local gyms. Capable of generating wonderful graphs through cloud connectivity, these machines spell the beginning of an era in which responsive health products can be used at scale to train and diagnose issues in an entire variety of the general population.

Learn more about Wattbikes and their versatile use-cases at wattbike.com.