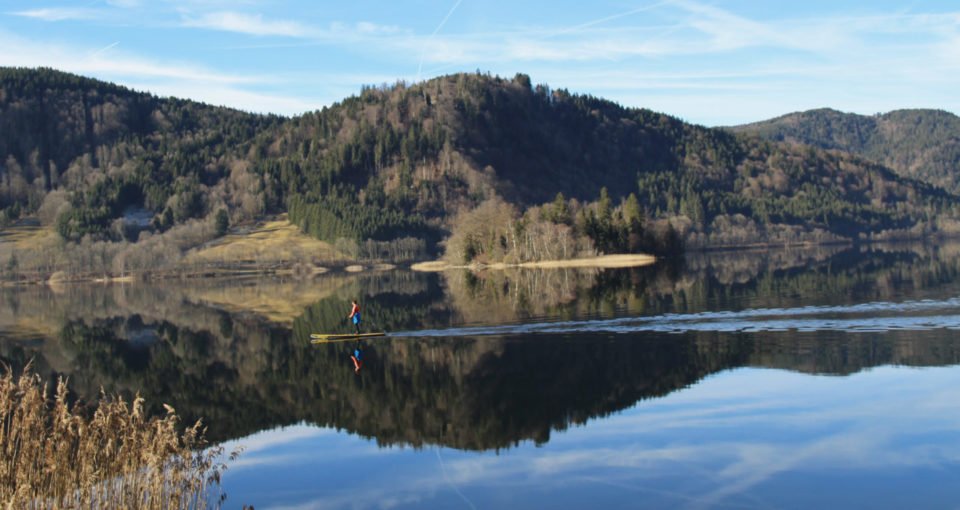 Slice a line south of Munich and you approach a pair of lakes, each wrapped up cosily by a mountaineous backdrop and all the Bavarian charm you would expect from a pristine snapshot of German alpine culture.

Tegernsee is the more famous of the two, complete with brewery, a waterside spa and a vibrant scene for sailing. Hop over the hill to the east to find the shores of Schliersee and an arguably better endurance retreat, also home to a welcoming spa.

Schliersee is chili-shaped, roughly 7km all the way around and the start point for the Schliersee Alpentriathlon. From the lake there is an abundance of quentessential Bavarian backcountry to check out on the bike, and a complex flat and bumpy trail network.

For a 50km Schierlsee bike route, head into the countryside to the east of the main drag into town. These roads are included in the June Schliersee triathlon and include some challenging climbings that connect delightful villages and farmed fields. As you continue the loop in a clockwise direction, you’ll wind back toward Schliersee and have the option of going left up to Spitzingsee. This left shoots you up a beastly climb, 3.7km at 9%.

As for trails for running or walking, Spitzingsee has an extensive network of flat routes, including trails that head into the neighbouring valley without too much climbing. Two challenging routes up the mountain include Benzingstraße Climb (3.3km / 14%) and Neuhaus – Brecherspitz (4.8km / 17%).

As for comforts – a vital component of any endurance stay – the spa and fitness Alpenhof Hotel worked very well for me, though it’s a little up the valley from Schliersee and classfies itself as part of another village, Bayrischzell. But storage for bikes is ample, found at the back of the building accessible from an entrance to rooms 40 to 43, and the in-house menu provides a good amount of sustenance to close off a day with spa and massage.

Your best approach on the hotel is from the train station, one of those miniature platforms where nobody gets off and you’re still looking for the right direction well after the train has departed. If you have good visibility, you’ll notice the mountains on the other side of the valley (to the South-West), walk in this direction down the hill and you’ll arrive at the property within five minutes.

If you’re in need of supplies, swing over to Bike Base where Stefan Hütter surrounds himself with a fleet of Cervélo bikes. Stefan is an accomplished Ironman triathlete, so he’ll also be able to guide you on the detailed optimization of this humble overview.

For coffee, head to town to glückSeelig for a calm coffee in the Schliersee’s not-so-busy downtown area.

Taking the 1-hour BOB train from one of the Munich Hauptbahnhof is the best way to get to Schliersee. Just make sure you and your bike are in the correct carriage for Osterhofen, since they do break one of three ways later in the journey.