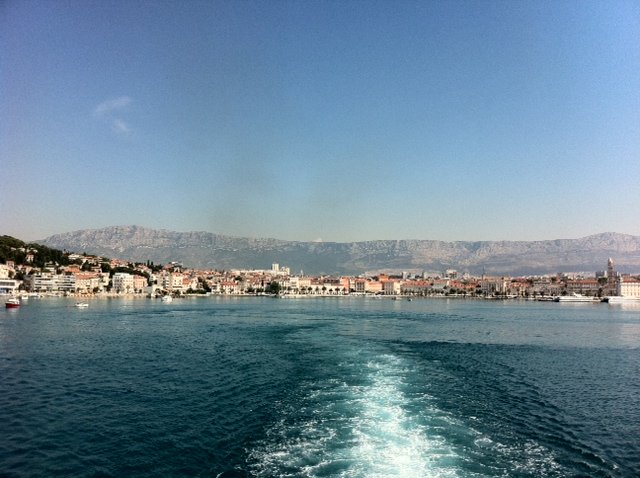 After spending the whole morning on a ferry, my mileage was somewhat constrained by disappearing daylight. I a tough call to make; a longer, flatter ride nailing big miles but to the same coastal format, or a ferry followed by a much more interesting route.

Ultimately I decided on the interesting option, having now spent several days riding on flattish terrain. I have been arguing with myself on this one slightly, as taking the ferry seems a bit of a cheat. At the end of the day, I reasoned, this trip is about linking areas of interest such as the high mountains of the Alps and Dolomites and the cool Croatian islands. If I wanted to do a big milage trip, I would have started in Holland.

I digress, here I am on the Peljesac Peninsula, a spit of land which juts out the side of Croatia and into the Adriatic Sea just north of Dubrovnik. The ferry this morning took me to Korcula, a stunningly green island with few settlements and some sizeable hills. I rode the length of the island from Vela Luka to Korcula, working along perfectly smooth and deserted roads that made for some nice riding.

Arriving on the island shortly after 1pm, the temperature was high from the start. I instantly began climbing and was soon getting a good sweat on. Further into the hills, 9% hairpin slopes rose in front of me so I stopped for a natural break. As I relieved myself I noticed the verdant plant onto which I was urinating was a fig tree and covered in ripe figs. Amused, I finished my business and then ate a few of the excellent fruits (from higher branches) and added a few more to my pockets!

After a few undulations I reached the high point of the island at 560m from where I could see for miles. A quick snap before plummeting down a fast descent to the ferry terminal.

The contrast between the islands I have ridden has been immense; Pag was an arid moonscape and here I was in rich forest some few hundred kilometres south. Korcula is a really beautiful island and I suspect the awesome road network has been developed in anticipation of a tourism explosion. For now the island remains a relatively unknown treasure and is certainly worth the journey.

A 10 minute ferry hop took me back to the mainland, so completing my final ferry trip of this adventure. On Peljesac the mountains were bigger and the roads steeper, angling me upwards on a another climb from sea level. By now it was scorching hot with barely a breath of wind. As I climbed slowly I could feel my face glowing. My whole body was varnished in sweat as I slogged up the long climb. I usually operate well in the heat and have quite a high tolerance but today was very hot. I felt awful and tried to get some more fluids down. Once again, despite a strong start to the day, my post rest day ride was turning into a real chore. With sweat running down my arms and saturating my gloves and drips falling from my nose, stinging my eyes on route, I really hadn’t hit  ideal conditions at the backend of a shorter day.

I had a tip off from Pete that there exists a wicked campsite called ‘Camping Divna‘ near the town of Trpanj on the north coast of Peljesac. I would aim for it, stopping in Trpanj for food on my way to camp. After the 500m climb I dove down towards Trpanj and passed the turn off for the campsite. Damn it; I needed to keep going down to Trpanj for food and knew I would have to haul myself back up the hill. I purchased my food and had a quick espresso pit-stop in the scenic sea side village.

Wearily, I set off back up the hill to the campsite. After the turn off, the road narrowed and climbed up through small vineyards with steep sided hills either side of the small valley. It’s a spectacular road but really drags on. I reached the top of the final climb and could see the sea, the road plummeted below with a series of hairpins bends. Down I went, in full knowledge that tomorrow morning I will have to come back this way as this is a ‘there and back’ trip. 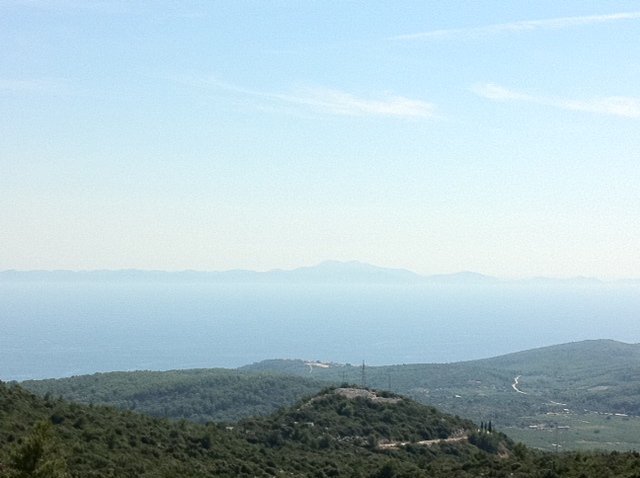 On arriving at the campsite I was told ‘it’s full’! I protested with the man and explained I was on a bicycle and very tired. I would have to speak to Steve. ‘Where is Steve?’ I enquired. I tracked down Steve, a New Zealander who runs the campsite. He asked upon hearing my accent, ‘are you  English?’. My response: ‘no, I am Scottish.’ ‘well we have got to find a space for our Scottish friend!!’ he exclaimed. Result! I was in!

So thanks to Steve I am installed at this spectacular campsite with it’s own beach in a small bay which looks out onto a few small islands. Steep hills rise up from the back of the site. It will be brutal getting out of here in the morning!

So only 80km for the day but it felt like a lot more. The heat really nailed me today, hopefully I can escape the worst of it with an early start in the morning. Tomorrow, Dubrovnik.

Jump to Jack’s next day