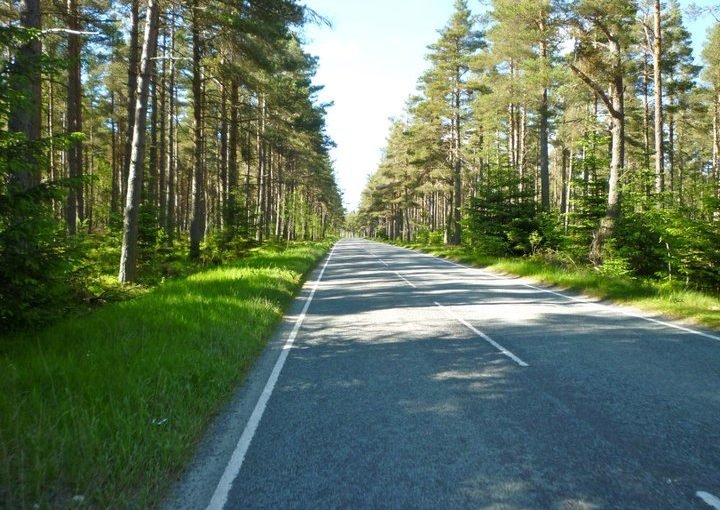 Having detailed some of the steps I took in preparing and carrying out my touring trip for Route Planning, Equipment and Nutrition, the final blog in this series on cycle touring shares some experiences from a summer 2011 trip.

In June this year I went on a five-day mini cycletour of Northern Scotland.  The aim of this trip, outside of being a good adventure and opportunity to see some different parts of Scotland, was to learn the ropes before embarking on a longer trip the following July. I wanted to assess how my kit performed and identify any weaknesses, to see if I go insane in my own company and to see what sort of distance I could cover.  With a reasonable base bike fitness, I was not too concerned about the riding but the other aspects of the cycle touring which were largely new to me.

It was a cracking Thursday morning when I woke on the departure day.  Hot sun and barely a cloud in the sky – a massive contrast to the week of nearly constant wind and rain I had experienced on Arran the week before.  I packed up my panniers, checked my kit list once more, got ready to depart, switching off my phone and removing the battery to be sealed in a plastic bag.  I didn’t feel the need to communicate with anyone by phone for the five days ahead, and quite frankly I wanted to get away from Crackberry messenger and Facebook.  I took the phone for use in emergencies, and told my parents to be worried if I wasn’t back by midnight the following Monday.  It was go time.

A gentle start saw me crossing from my parent’s house on Feughside, 20 miles west of Aberdeen, on to Deeside.  Here I followed the river on the South Deeside Road and arrived at Ballater from where my route would take on a hillier profile. After a pit stop at Cycle Highlands to buy a lock and spoke key, two items I had yet to obtain for my trip, I continued on to Gairnshiel Lodge and on to Donside.

At this point I headed up over the Lecht, a tough climb with loaded panniers. The challenging ascent is over 20% in places, and demands a 34-25 gear ratio.  Having cleaned the summit I headed on, stopping in Tomintoul for lunch before pushing north to Nairn.  I had reccied the Granton on Spey to Nairn road in February in the snow so it seemed a real treat as I bashed on in the hot sun.  I stocked up with provisions for the night and breakfast in Nairn then continued on the horrible A96 to Delnies Wood were I paid my £5 for the privilege of pitching my tent, but more importantly gaining me access to an awesome hot shower.

I pitched my Vango Helium Superlite 100 and cooked some scram.  The first outing for my new stove and pans saw them successfully cooking pasta with tomato sauce, some bacon and even some steamed broccoli on the side.   Cake and custard providing the perfect end to a perfect day.  As I sat with the breeze keeping the midges away, and the last of the day’s sun filtering through the trees, I wondered if the weather would hold before my idyllic hopes found rest in a good night’s sleep.

The second day of my trip took me north via a coffee shop in Dingwall and over from Alness to Struie Hill by the excellent B9176, a fantastic hilly road that climbs up through the trees in an Alpine fashion before giving way to expansive heather moor.  The sun continued to shine and a keen tail wind made for swift progress.  After a long and fast decent, complete with a few scary cross-wind-pannier-laden-bike-wobbles, I rode in to Bonar Bridge and stopped for lunch.

From lunch I rode round the Dornach firth to Clashmore, joined the A9 (at this latitude the A9 is a quiet and pleasant road), and pushed north towards my target of Helmsdale.  I bought some food in Bora to see me through until lunchtime the following day – a wise choice as by the time I reached Helmsdale the shops were shut.  I turned off at Helmsdale and began looking for a suitable spot to camp.  To my delight the banks of the Helmsdale did, as I had hoped, offer some cracking camping options.

After a few false promises I found a spot accessible by some fisherman’s steps down from the road to the river bank.  I did a quick recce by foot and then returned to lug first my panniers, and then my bike down to the river.  I stuck my tent up before stripping bare and jumping in the river.  The water had been warmed by the sun and cleared the salt from my face – I couldn’t stop grinning. With the breeze still keeping the midges away, I let the sun and breeze to do the drying. Amazing.

The following day I had an early start because I wanted to make good time to Durness to give me a moment to explore on foot upon arrival, and to make use of the shop there before it shut.  After a much more efficient packing up of camp I headed off, following the Helmsdale with a constant stream of happy fisherman waving morning greetings. The road was largely flat and took me into increasingly bleak terrain.  Trees and vegetation, with the exception of heather, became sparse and soon I turned off at Kinbrace, leaving behind the train line and any trace of humankind.

I wanted to return to a spot at Loch Naver I used to go to with my family on summer holidays as a child.  When I eventually reached the campsite, I formed a new appreciation of the bold call by my parent to bring 4 children, 2 dogs, 6 bikes, windsurfers and a caravan to the middle of nowhere for a summer holiday! After a brief chat with the woman running the campsite I cycled on over the hill to Tongue. The road on this stretch seemed to climb endlessly and I could feel my blood sugar levels dwindling.  I was running out of food and badly needed a shop to stock up.  Eventually after a really scenic ride along Loch Loyal I dropped into Tongue and thought for a few grim kilometers that there was no significant population and thus no shops to be had.  I was worried – if I couldn’t pick up food here I was going to have a very unpleasant hypoglycaemic slog to Durness.

Eventually, several kilometres after passing the “Welcome to Tonge” sign, I dropped into the village. The first building I came to was the Tongue Hotel where I immediately stopped and devoured soup and bread followed by steak pie and chips.  I’m not sure that this is Lance Armstrong’s mid-ride fuel of choice, but I would have eaten just about anything at this stage.  Belly filled, I pottered on to the shops in the village and got some provisions to see out the day, factoring in a few emergency rations so not to repeat the starving issue experience on the ride to Tongue.  The view out over the Kyle of Tongue was spectacular and after speaking with a local who stood to attention and saluted me on hearing my day’s itinerary, I pushed on for Durness.

This route to Durness was the most fantastically scenic route – heather moors interspersed with white sandy beaches and crystal blue water.  The road undulated dramatically with a rollercoaster like menace around the coast – so much for my assumption that any road following the coast would be pretty much flat.  The tortuous route around Loch Eriboll would have been frustrating if it wasn’t for the awesome scenery and persistent sunshine, all be it twinned with a harsh northerly breeze.  I arrived in Durness just in time to stock-up with food at the shop, what a day!  I had good company in the form of two motor bikers whose tent was next to mine, and a Dutch woman who was also cycle touring.   After an interesting dinner, making the most of the limited supplies available at the shop, I headed to the beach and sat on the rocks that pierce the white sand; watching surfers in Sango Bay as the sun continued to shine.

I was sad to be leaving Durness, its a very special place, and I will definitely return.  The landscape became messy and craggy with the road taking an undulating course.  I pushed on, not feeling as strong as previous days.  The north coast is slightly deceptive, the effect on your legs of making forward progress seems disproportional to the terrain,  clearly its more hilly here than I thought.  I picked up the West Coast and rolled down to Scourie on the A894, here I stopped for a coffee and a chat with some fishermen staying in the hotel.  Small boats sat moored in an isolated bay, the blue water made for a stunning view. The road then trended away from the coast and I saw little of the sea until I dropped down towards Ullapool.  My shortest day complete, I had time for an afternoon kip having pitched my tent. Watching the days catch being landed from fishing boats, I sat and devoured fish and chips with my legs hanging over the harbour wall, a keen breeze keeping the temperature low.

During the night the rain came.  I had been emensly fortunate to make it this far without any serious precipitation, but in true west coast fashion, it was now chucking it down!  In the early hours I lay dreading the inevitable damp start, with the rain’s intensity amplified by the tent. Once I hit the road however, I realised the rain was easing and that some brightness could be seen behind the thinning cloud. Lush vegetation lined the road as I rose up out of Ullapool and headed SSE on the A835.  My pace quickened as I tried to out run the rain, to keep my body temperature up and push for home.  My plan was to head across the country to Inverness and from there catch a train South towards Aberdeen as far as Inverurie.  I approached Inverness via Muir of Ord and then Beauly. Returning to lowland civilisation felt good and I had a feeling of having returned from the wilderness.  The northern parts of Scotland offer true wilderness unlike anything else in the UK, and despite always being on roads, there were times where I felt a long way from anything.  I rolled into Inverness, readjusting to city traffic and following signs to the station.  A quick check of the boards revealed a train leaving in 5 minutes, I dashed to the ticket office and jumped onto the train.  From Inverurie I mounted my bike for the final stint and pushed for home, now back in familiar territory.  Arriving back home my adventure was done.  5 days since departure, I was back to the start, my loop complete.

This trip taught me a lot and I enjoyed the experience so much that I embarked upon a three-week long trip through Europe later in the summer.  Solo cycle touring has a brilliant purity.  There are no complications, just ride, eat and sleep.  Life becomes very simple and the days super rewarding.  Just be sure you plan your trip to coincide with a spell of classic Scottish summer weather.  More adventures by bicycle to follow…