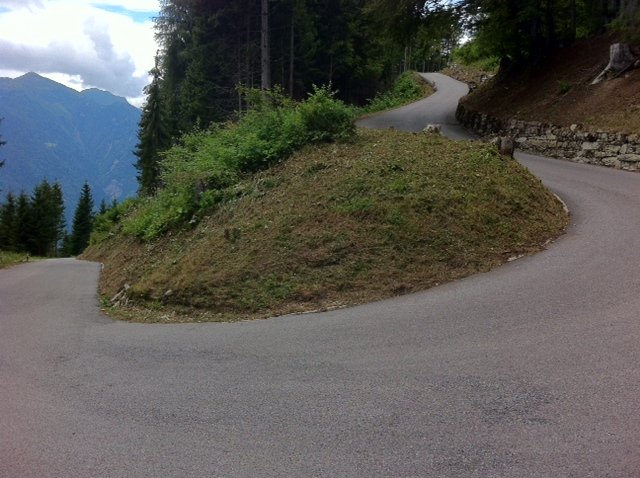 On May the 21st I watched my cycling heroes on Eurosport as they tackled the Monte Zoncolan in the Giro d’Italia. The road looked unbearably steep, and even the for the finest cyclists in the world, the challenge of getting up the mountain was immense. I knew I had to experience it and when planning the route for this tour, the opportunity presented itself. I would start the Alps with l’Alp d’Huez and finish the Dolomites with Zoncolan.

Chatting to the campsite owner last night, himself a keen cyclist, it became clear that perhaps this was going to be even more of a challenge than I had anticipated. His words ‘it is not possible’ were far from encouraging. He was responding to my suggestion of riding the mountain with loaded panniers. He made numerous alternative suggestions, gave me maps of other routes, drew maps of the Monte Cristo (an different climb in the area), suggested I leave the panniers in a cafe, etc. He really wasn’t keen on the idea of me hitting up Zoncolan.

He was a very kind man and I pondered his comments as I departed from camp. But, I hadn’t come all this way to back down now. It was still on.

From my start today in Forni di Sopra I quickly dispatched the 40km to Ovaro and the foot of the Zoncolan. Pulling out of the village with the rich taste of coffee lingering in my mouth, I felt confident. This confidence was soon shattered. The road surged upwards with little by way of switch backs, just straight up. I was already in my easiest gear, out of the saddle and hurting, lots. I began meandering from one side of the road to the other, in an attempt to tame the severity of the 20% climb. Surely it could not keep this up? Well, yes it could.

A big sign alerted me to the fact I was only 500m along the 9km road. Surely a misprint, I was already soaked with sweat and in need of a rest. Typically I don’t stop on climbs, last week I did l’Alp d’Huez (supposedly a toughy), in a oner. After 1 km of the Zoncalon I had to find some shade and let my heart rate drop. The road maintains this super steep format to the 6km point. I slogged on, head down, making my own switchbacks, riding straight up was impossible for me and I had to rest on several occasions. Cleaning the climb today was not an option.

On the lower slopes I rode with a pair of Dutch riders, until one of them stopped whist chanting ‘impossible,impossible’, he was broken. I didn’t see them again.

As I said, at 6km the graident slackens, there is a half kilometre section of lower gradient where I was able to sit in the saddle and pedal. But then the steepness increases again. Eventually I came to a final section of four hairpins and I could see the summit above me. I reached the top and high fived a fellow cyclist who had come up the slightly easier route which I would go down. He clapped and looked stunned at my panniers. I had made it.

Yes I under estimated the Zoncolan. It is far, far harder than I had anticipated. But, it’s a must for all cycling fans. 9km and 1200m of vertical ascent – it’s beautiful. It makes any climb in the Alps that I have done seem a doddle. It took me 1hr 40 mins to get to the summit. Surely the toughest road I have ever ridden.

The descent was equally steep for a few kilometres and then eased to a very fast and fun swooping rollercoaster. Hitting speeds of 70kmh and warming up as I got back into the valley.

From then on the day was comparitevly easy, the highlight being the 1360m Passo di Monte Croce taking me over the Italian boarder and into Austria. I am now at Kotschach Mauthen and enjoying the stark contrast to Italy. I am only 12km from the boarder but it feels a different world. As I travel through Europe my appreciation of the diversity in such a small area widens. Everything: food shops, people, architecture. It’s all changed from Italy.

What changes will Slovenia bring tomorrow?

Jump to Jack’s next day