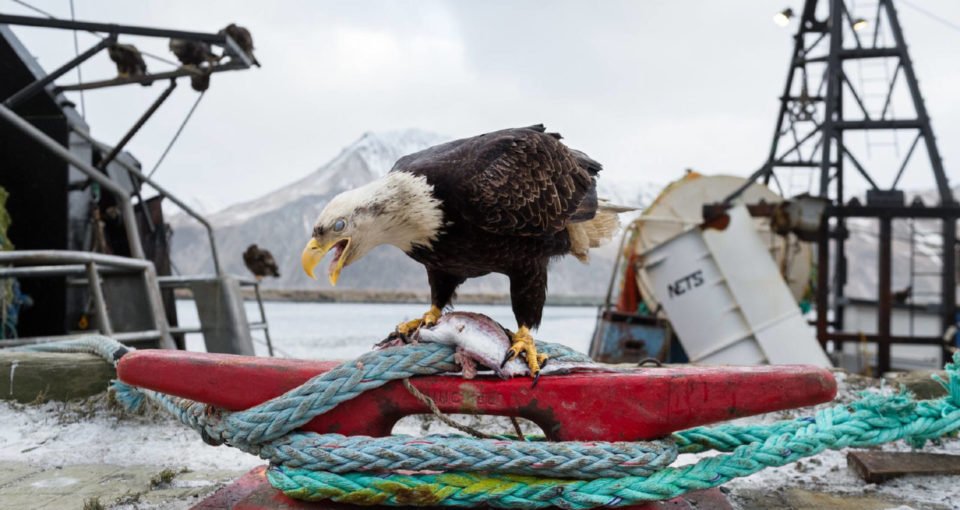 Arnold first visited the region as a 24-year-old to try his hand on the high seas after posting a job-wanted sign outside a bathroom at Seattle’s Fisherman’s Terminal. A Norweigan fisherman picked up the experienced deckhand and flew him north through the icy volcanoes and turbulent before touching down in a the small fishing town of Dutch Harbor.

Found at 53.8° N, the working-class town thrives off fishing, providing a dyanmic industry for several thousand permanent residents. Arnold sees it as a place of curiosity and challenge: “It’s a place where industry and nature collide in strange and beautiful ways, a place where people harvest seafood on a massive scale, and share their meals and their refuse with local wildlife – from rapacious bald eagles to curious foxes.”

After jigging for Codfish in the Bering Sea during his first year, Arnold returned for the next seven seasons, lured by the sheer toughness of the profession, an “often masochistic realization of the American dream.”

Now established in his career as a photographer, Arnold looks back to these formative years as a rupture from his Californian upbringing, a transcendence that is now captured in the magnificent, tough and humorous show hanging in Southern California’s desert.

The series at Richard Heller Gallery includes recent trips aboard crabbers and trawlers, as well as a number of photographs capturing the wriggling abundance of nature that now finds itself dependent on Dutch Harbor’s waste and hunger.