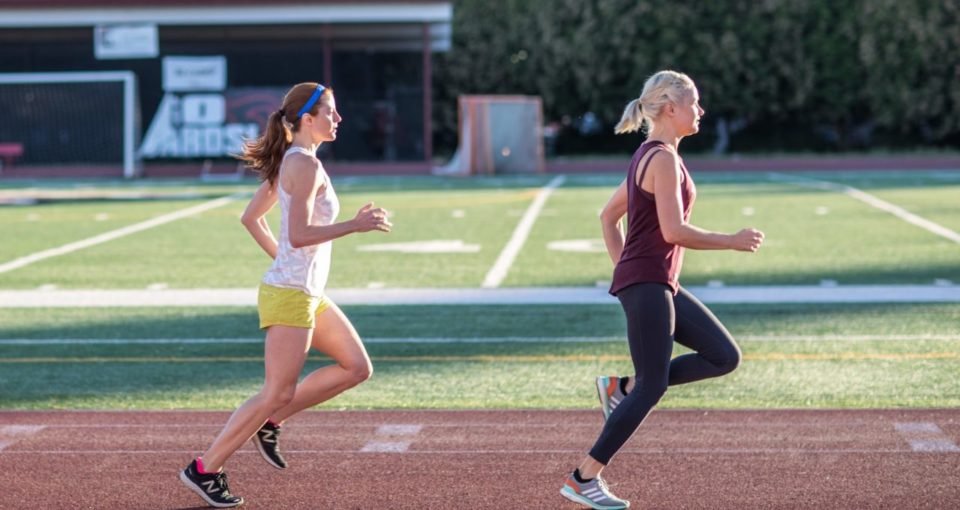 In response to their humid summers, New Yorkers employ a fine defiance act, spending mornings in the precise calculation of the afternoon’s chances of rain. Studious attention is spent debating percentage points and what determines “likely” or “certain”, numerically speaking. Ultimately any rain results in a deluge and near-Apocalyptic fury, rupturing schedules across the five boroughs. But the most determined are able to overcome this breakpoint, continuing to carve a sure, uninterrupted path through the day.

It was in the middle of a violent rainstorm that I found myself in May, at the doorstep of Brooklyn Running Company for a Tuesday evening track workout with Brooklyn Track Club. With the street washed clear of pedestrians, we proceeded with the evening workout as scheduled, packing in a slightly refined set of intervals around McCarren Park, the group dividing according to pace as usual. Without doubt, the group provided an extra layer of justification for runners, who might otherwise call off a session in such torrential conditions.

Seeking out group runs has become one of my go-to activities whenever travelling between cities. Requirements are demanding, based on a need to balance the casual, cool and competitive cornerstones of a sport that is going through a slow renaissance. Digital-first running groups, or “crews”, are at the forefront of this, and Brooklyn Track Club are no exception, part of a growing swell of dynamic organisers establishing their own communities in world’s most progressive cities.

Whereas legacy running clubs leveraged their sense of place and entrenched this with club-only rights, groups like Brooklyn TC relate to a different perspective on the sport. Inclusivity allows for a range of abilities and per-session needs, fundamentally encouraging a diversity which makes new clubs more representative of a neighbourhood, and more socially robust as a consequence (running is merely a topic not the entire focus). In this way, newer groups look more like collectives to be part of, than clubs to be apart from.

The breaking of conventions can also be found in a number of superficial details. Naming is often creative and borders on the mythic, with most affixing “Track Club” to their names even if, ultimately, their spread of competition ranges from the track to the road marathon. Other clubs names such as “The Lost Boys” (New York) and “Jacuzzi Boys Athletic Club” (Portland) are two of the more incongruous titles in the sport, but they somehow work and appeal to a discerning few. Kits also act as a centrepiece, defined not merely by garish, pre-digital colours, but by unique patterns and complementary colours.

For all the dynamism of the old guard, it’s no surprise that these running crews are being created by digital natives. Most have functioning websites or attractive social media pages, that are not only responsive to mobile phone screen sizes, but update with a reasonable and reliable flow of content. They’re able to figure out what a good image and document club events with odd but interesting edges, a creativity missing on the down-the-line media from dated institutions.

The mobility of these organisers spills over and well beyond neat digital touch points. In Portland, Rose City Track Club have organised a mile challenge within their first season, a certain Rose City Mile, which takes place on June 30th. Meanwhile bagel runs, “Church of the Long Run” and other novel monikers have defined themselves in this new fresh wave of running. Brooklyn Track Club’s drenched session took place in metronomic obedience of the rule that Tuesdays are speed days, even as we waded through ankle-deep puddles in McCarren Park (“the trenches”, manifested).

Forming lightweight partnerships with local companies is also a fact of socially fluid era. Rose City Track Club have a permanent link with Athena, a strength and sports rehab clinic in Portland. In London, Advent Running link with Camden Town Brewery for their Wednesday evening “Run Like Hells” workout, and Workshop Coffee for their “Fast Friday” morning run.

Other clubs have sprung out from bricks and mortar itself, Vancouver Running Co. being an impressive store in the Kitsilano quarter, also one of the few clubs to leverage scheduled runs through a Strava Club page. It’s rare to see retail utilise space with the same degree of selectivity as a contemporary art gallery, and visitor can’t help but appreciate the custom interior and shiny water dispenser.

For all the different forms and interpretations of new running crews, it’s clear that the sport is slowly aligning with new trends in fashion and recreation. The arrangement of these clubs is reflective of the fact that runners are also a geographically porous lot, with affinities to a sport that trumps, say, the local pub or church. Outsiders might disagree with the temporary takeover of sidewalks and ambitious exposure of lolloping limbs, but they have to appreciate that the future is healthy and that, perhaps, millennials aren’t trapped by inertia.

Find out more about clubs and routes in our Zafiri City Guides. Thanks to Bobby Rivera (@mr_bobbyrivera) for the header image, featuring two athletes from Rose City Track Club.