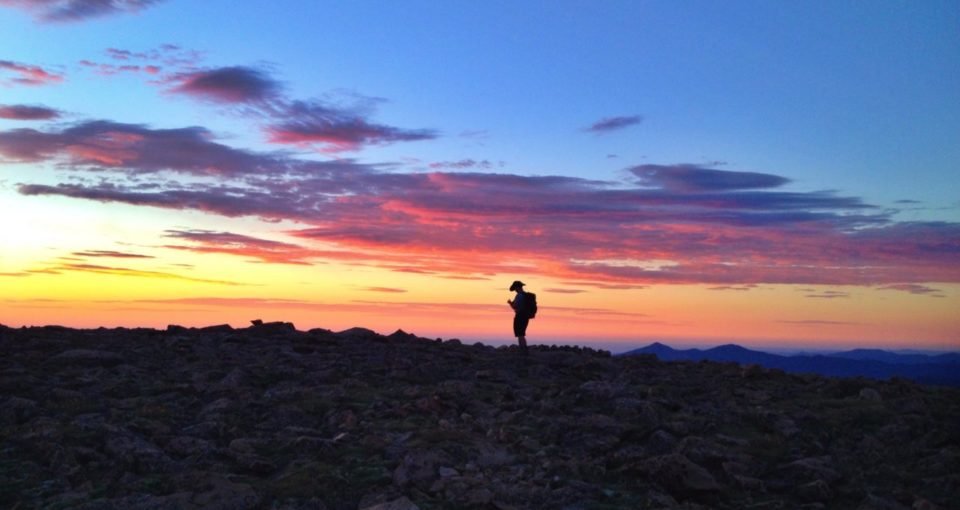 Spanning a distance of nearly 3,100 miles (5,000 km) from Mexico to Canada, the Continental Divide forms the backbone of the Rocky Mountains in North America. The divide not only acts as a physical division of the continent, but also a hydrological one, marking the point at which water flows from the western slope to the Pacific Ocean and from the eastern slope to the Atlantic Ocean. The divide represents the height of land between watersheds, but does not necessarily follow the highest peaks within each state or region.

The Continental Divide Trail (CDT) runs from the Mexican border to the Canadian border through five states: New Mexico, Colorado, Wyoming, Idaho, and Montana. Completion of the entire trail can take up to “six months on foot, when averaging 17 miles per day.”

Colorado is famed for its abundance of breathtaking mountains thanks to the Continental Divide which runs through the middle of the state. For locals and tourists alike, conquering the state’s 53 Fourteeners (14er), peaks with elevations over 14,000 ft, is a popular summer activity. While 14ers often steal the limelight, Colorado boasts 637 Thirteener (13er) peaks of equal beauty and challenge and often less traveled. The Continental Divide Trail Coalition writes that “With more than a thousand summits topping 10,000 feet, Colorado truly is a Rocky Mountain high. The CDT traverses 800 miles of these majestic and challenging peaks dotted with abandoned homesteads, ghost towns, and remnants of Native Americans and settlers who flocked here to mine gold  and silver.” Having spent my entire life in Colorado, I was eager to take on the challenge of tackling a segment of the trail.

Many portions of the Colorado CDT are easily accessed and do not require technical mountaineering. As an avid skier, Winter Park, Colorado is my second home. It also boasts spectacular views of a 13-mile portion of the Front Range segment of the CDT. This part of the CDT, with six distinct peaks and a net elevation gain of 5000 ft, dominates the views from Fraser Valley and the southern part of Grand County. Like many parts of Colorado, this area has significant railroading history, which linked the western slope to Denver. Construction of Moffat Tunnel was completed in 1927 to eliminate the original treacherous “Hill Line” route over Rollins Pass. Instead, the tunnel passes directly underneath James Peak for 6 miles. Much of the region’s railroading history is reflected in the names given to the surrounding mountains, roads, and trails, a high concentration of which are reflected in the ski runs in Mary Jane Territory at Winter Park Resort.

With easy access points at Berthoud Pass and Rogers Pass Trailhead, a friend and I planned to complete the 13-mile thru-hike during the last weekend in July. The vast majority of the CDT is above tree line and many portions of it are off-trail. Temperatures at high elevations average the highest all year in the month of July and thunderstorms typically hit in the afternoon. Conquering this trek in the early morning of late summer months allows for significantly less gear, better inclement weather safety, and faster hiking. Snow cover never presented itself as an issue, but more of an opportunity for fun, glissading down northern faces that still held snow.

Prior to the dark and early morning start, we stashed our first vehicle at Rogers Pass Trailhead (11,107 ft). The trailhead is located along Moffat Rd (sometimes called Corona/Rollins Pass Rd) which stretches 14 miles up a scenic dirt road from US Hwy 40 just north of Winter Park Ski Resort to Corona/Rollins Pass (11,676 ft). From US Hwy 40, turn east onto County Rd 80 (later Forest Rd 149) between mile markers 231 and 232. The road can be rough in areas so vehicles with AWD and high clearance will certainly fare better. Follow the road for approximately 11 miles to the top of a steep climb. Rifle Sight train trestle will appear to your left, Mt. Epworth (11,843 ft) straight ahead, and Rogers Pass Trailhead parking along the road as it curves to the right. A small sign marks the start of the trail. The portion of the road is fairly narrow and allows limited parking for 3 to 4 vehicles.

From Berthoud Pass, a switchback road winds up Colorado Mines Peak (12,493 ft) for 1.7 miles to the summit. This is the first and steepest climb (1,186 ft gain) of the day. Don’t forget to pack headlamps and extra batteries as the first two hours of the hike are spent in the dark until sunrise around 6 AM.

Close to the summit of Colorado Mines the official CDT diverges to the north marking 2 miles to Mt Flora (13,132 ft) skirting Colorado Mines. With the intent of bagging as many peaks as possible, we abstained from this route and followed the dirt road to top where there is a large establishment of radio towers. This first climb took just under an hour to complete.

From Colorado Mines head northeast to the saddle between Colorado Mines and Flora. Much of the southern ridge cliffs out from the summit, so stay more to the northern edge of the ridge to avoid surprising drop offs before the sun rises.

From Mt. Flora the CDT diverges from the true divide and turns southwest to Breckenridge Peak (12,889 ft) skirting three bigger peaks, rejoining the divide at the summit of James Peak. This longer detour provides better access to water sources at lower elevations, and offers easier access for hikers, mountain bikers, and horses. We opted not to take this easier route and followed the true divide over the mountains from Mt. Flora to James Peak. Sticking to the true ridgeline means forgoing a maintained trail and forging your own path with the help of sporadic cairns. This majority of this trek is off-trail which allows for each hiker to self-select the difficulty of certain portions.

From Mt. Flora, now off-trail, it is a brisk trek on a steady incline along the ridge to the shoulder (12,805 ft) of Witter Peak (12,884 ft). From this point, follow the ridge west up to the summit of Mt. Eva (13,130 ft). Just before the summit, you’ll come across an abandoned radio tower structure, battered and bashed by harsh high altitude weather.

The ridge descends quickly from Mt. Eva to a short saddle and immediately climbs steeply to the top of Parry Peak (13,391 ft), the tallest of six peaks along the route. Without the luxury of a worn trail, this ascent proved the most difficult of the trek for me as I struggled to pick an efficient switchback route through the high alpine grass and rocky terrain. After a strenuous slog to the summit of Parry, a small rock structure provides a perfect resting area, sheltered from harsh wind. The 360-degree views atop Parry are perhaps the most spectacular and rewarding of the entire hike. Looking east, Denver and other front range cities are visible. To the southwest, the entire first portion of the hike across the Continental Divide is discernible. 14ers, dominate the views to the south including Grays Peak (the highest point of the CDT), Torreys Peak, Mt. Evans, Mt. Bierstat, and even Pikes Peak. To the west, Winter Park Resort and Fraser Valley, and the Gore Range beyond. To the north, the Indian Peak Wilderness, Rocky Mountain National Park, and 14er Long’s Peak. And to the northeast, the remainder of the route recognizable as it crosses Mt. Bancroft, James Peak, and descends north to Rogers Pass Trailhead.

Turning east, it is a swift and easy .7 mile downhill traverse from Parry Peak to Mt. Bancroft (13,250 ft). At the summit of Mt. Bancroft, we encountered two climbers who summited Bancroft from its eastern slope. These were the first people we had met along the trail all day. From the summit of Mt. Bancroft head north toward the James/Bancroft saddle through both grassy and talus slope. Ice Lake is visible on the eastern slope from the saddle and is aptly named, with plenty of snow and ice covering half of the lake. Ohman, Reynolds, and Steuart Lakes and Loch Lomond rest further below.

This next portion of the trail is rated the highest (class 2+/3) as far as difficulty is concerned and requires some scrambling. We chose to head up the middle of the first pitch of the ridge and to the left of a large notch. Once at the top of the crest of the first pitch we dropped down toward the western side of the ridge to avoid the eastern exposure . As the ridge begins to ascend on the eastern slope it cliffs out over Ice Lake. This portion of the route can certainly be tailored as difficult as suites each person, but certainly staying lower along the ridge crest will be easier. Cairns along the ridge will help guide you to a fairly flat plain before a short and final climb to the summit of James Peak.

We reached the summit of James Peak (13,294 ft) just after 11 AM. For most treks above tree line in Colorado, it is important to descend from the final summits before noon. Thunderstorms roll into these areas quickly and without warning. James Peak is a much more popular day hike. We met several groups of people at the summit and many more on our way down to Rogers Pass Trailhead. At this point, approximately 3.5 miles of steep descent lie between James Peak and Rogers Pass Trailhead. On the descent, we followed a well-worn trail to a split at Rogers Pass (11,860 ft). Stay left to continue on the western side of the hogback ridge. The trail to the right descends to Heart Lake on the eastern slope. Following the western ridge trail, you’ll eventually come to another fork in the trail. Take the left most path to head to Rogers Pass Trailhead or continue straight to continue to Rollins Pass. After a few switchback the old jeep trail dips below tree line and spills onto County Rd 80.

Finishing just after 1 PM, after 9 hours and 20 minutes of constant hiking, we successfully finished the trek just as thunderheads began to threaten rain and lightning. With only a couple short breaks spent during the trek, the comforts of civilization never looked so good and we were eager to swap hiking boots for sandals, enjoy some snacks, and rest our exhausted limbs. The town of Winter Park hosts many fabulous restaurants, but The Ferg burger from The Library is a hearty and well-deserved treat after such an excursion.

For those who enjoy high-mileage, fast-pace hiking, this segment is a perfect example of what the CDT is all about: pristine wilderness, persistent challenges, and high altitude spectacular.