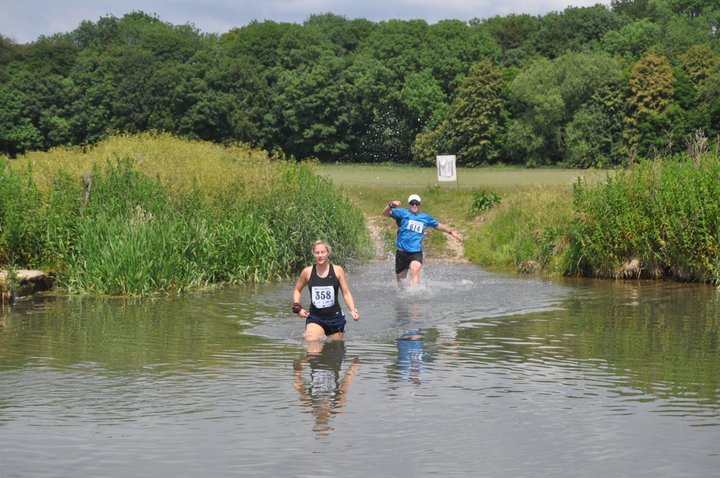 On Saturday 4th of June, Team Magnetic Junction took part in the inaugural Columbia Hellrider. Taking place in West Wycombe Park, the Hellrider is an adventure duathlon in which teams must complete as many running and cycling laps as possible in eight hours. A run must be followed by a cycle and all team members are required to complete at least one of each at some point during the event.

However, beyond the format, we had very little idea of what to expect. And with the Hellrider’s course set to include the “Devil’s Passage,” the “Teeth of Cerberus” and the “Bath of Beezlebub,” we were understandably apprehensive on arrival. An array of shaved legs and turbo-trainers in the car park did little to calm the nerves. Magnetic Junction were guests of Columbia for the day and having met with their representatives and set up camp, we began to relax. Bikes were prepared, muscles loosened, and all too soon it was time for the race to get underway.

It was only as we arrived at the start area that the true nature of the Hellrider became apparent. There were close to seven hundred entrants, competing in teams of three or five. There were also a few hardened soloists. Chatting with some fellow competitors, it became apparent that people were racing to pursue a wide range of objectives. In the team competition, some were in it to win it, others to simply have fun. For the individuals, the Hellrider was seen as good preparation for a summer Ironman. However, as the first runners began to gather in the holding pen, we could feel the tension and it became apparent that everyone was here to give it their best shot.

Magnetic Junction were competing in the fives category but a training injury to Charlie Stainforth’s ankle ligaments meant that we would be starting with only four. Charlie continued to help out as team soigneur and assistant, proving almost as valuable as if he had been competing. It was decided that team captain Will Ross would be our first runner and as the gun sounded and eight hours of racing began, he got off to a strong start. The runners disappeared over the hill and we settled down to wait for Will to re-appear.

The first runners emerged from the trees fifteen minutes later and headed for the transition zone. However, they were presented with one last obstacle in the form of a wide (and very deep!) river crossing. The day was heating up and it was great to watch the athletes relishing a dip into the cold water. The crossing was hard work and some considered swimming to be the most efficient method of tackling it! Will arrived after a strong run in twelfth place and after a passing of the baton (in this case, a specially designed “Hellrider” Buff), I set off on the bike.

The Hellrider’s website had promised a mountain-biking course that was “superb yet achievable” and they succeeded in doing so. Given the flat nature of the surrounding countryside, the event organisers had found some impressive hills and riders were tested from the off with a steep climb that wound off into the trees. The reward was a flowing section of singletrack and although it was not “technical” as more experience mountain-bikers might interpret the word, it was certainly quick and carrying speed proved a real challenge. Thereafter the lap included a varied combination of fire-road, singletrack descent and two lactic-inducing climbs. Indeed, by mid-afternoon, there were more riders pushing than in the saddle. The course ended with a very enjoyable grassy descent into the finish and I passed the Buff over to Sam Ring, our second runner.

The course for the run was equally challenging and no less spectacular. Starting on a climb, runners headed out into the verdant grounds of the Park, continuing their ascent for almost a kilometre before descending some steep and rooted trails. Motivational music was blasted through the trees on the descent, courtesy of a DJ at the half-way water stop, and made for a great atmosphere. Before long, the course climbed again and the unrelenting gradient coupled with the heat of the midday sun provided a real challenge. It was time, then, to head for the river crossings (by lunchtime, some runners were reluctant to get out) and back to the finish line. Sam put in a strong effort and handed over to Ross Mcewen who set off on the bike once more.

During the first couple of hours, as the field spread out, each stint was solitary and we completed a number of laps without seeing another competitor, either in front or behind. However, as the leaders began to catch those a lap behind, the race gained an extra-dimension.  By mid-afternoon, the course was a melee and it was difficult to know whether those ahead were direct rivals or several laps behind. The unpredictability was motivating and we pushed on, hoping that every pass was a position gained.

Things were more predictable in the start area (The Hub, to give it it’s official title), however, as the RACE Timing Systems tent allowed each team to keep tabs on the progress of their teammates by entering their race number. There were plenty of other tents to keep racers occupied when not on the course. Columbia had gear to be won, Clif Bar were giving out free-samples and generally keeping everyone going, whilst For Goodness Shakes offered a complimentary drink and a massage for tired legs! A cafe served hot food and drink all day and by 5pm it was more popular than ever  as some teams called it quits. By contrast, Team Magentic Junction were still very much in it and we watched our position progress from 10th to 8th to 6th. By the time the Hellrider entered its final half-hour we were on the verge of a podium in class and as Ross set out on the bike, the tension was high. Could he get back in time to allow Will to do one more lap?

The answer (by only three minutes!) was yes and our team captain set off for one last push. We headed round to the back of the course to cheer him on as he passed. He appeared much sooner than expected, giving it everything to finish the race on a high. Will’s time was only thirty seconds slower than his opening run of the day, an incredible effort given that he had already run three times and cycled twice. The result meant that Magnetic Junction finished third in the fives category, giving the team its maiden podium. It was a fantastic day, well-organised, challenging and enjoyable. We will be certainly be back next year, hoping to go one (or even two) better!