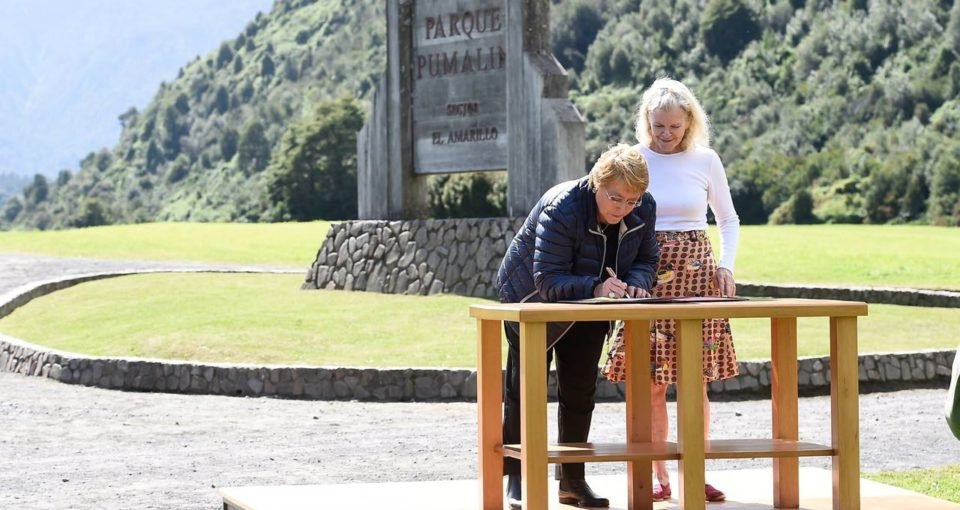 After spending over two decades rewilding one million acres between Chile and Argentina, Tompkins Conservation reached a landmark agreement on 15th March 2017 to initiate the creation of a national park system that includes 11 million acres of South American wilderness.

Chilean President Michelle Bachelet met with Kristine Tompkins in Pumalín Park, 715,000 acres of land purchased by Tompkins and her late husband, Doug, in 1991. Alongside their second park, Patagonia Park (200,000 acres), Pumalín is set to be connected with two existing Chilean national parks (Hornopirén and Corcovado) and one national reserve (Alacalufes).

The commitment by Bachelet sets in motion Chile’s plan to create Ruta de los Parques (“Route of Parks”), a network of 17 parks that span 1,500 miles of rainforest, glaciers and coastline from Puerto Montt to Cape Horn. As well as marking the largest land donation in history from a private entity, the total area of the new parks is vast – three times the area of Yosemite and Yellowstone combined.

The return to a more natural land management style has surfaced controversies. Aside from the disruption to established ranching practices, a hydropower project was stalled and logging terrain put off limits. Ensuring the successful restoration of natural habitat means aligning with powerful industries, at least before the deal is finalized at the end of 2017.

In itself, the two parks create jobs and generate cash in local communities. The town of Cochrane is home to 150 employees, positioned at the southern access point to Patagonia Park. A study commissioned by Tompkins Conservation estimates that the new park system could generate $270 million in revenue each year, bringing an additional 43,000 jobs to areas surrounding the parks.

To support Chile’s adroption of the new plan, Tompkins Conservation and key partners have promised to create a Chilean-based Friends of National Parks foundation. It’s this sense of cohesion between humans that could well provide a model and legacy for a project to inform the conservation of natural ecosystems around the world.

Speaking on behalf her husband in a speech during the signing of the agreement, Tompkins is direct in calling out the land’s connection to humans and political justice, “he would speak of national parks being the greatest expression of democracy that a country can realize, preserving masterpieces of a nation of all its citizenry.”

If you’ve found this story pretty interesting, dive into Tompkins Conservation’s 250-page PDF Deep Ecology which covers a range of topics. Or else have a glance through the Instagram accounts for Pumalín and Patagonia for a visual overview.