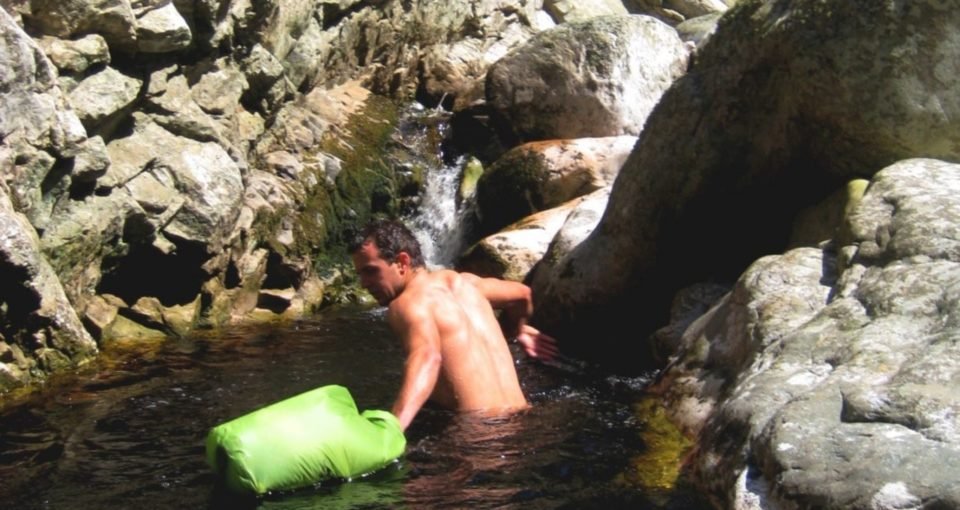 It’s 8am on a warm and sunny Saturday morning in South Africa. As most of us take the form of the weekend warrior, we naturally want to make the most of our two days off; Surfspots are often crowded, yet air-conditioned indoor activities won’t do yet you are craving for the outdoors.

Summer-adventures in South Africa do not stop at the beach. The many mountain ranges create canyons that will make Bear Grylls growl. Adrenaline-junkies in the rainbow-nation who have not heard of Suicide Gorge are not worthy of their title. Any newcomers should buckle up, this is one killer ride.

Situated between Grabouw and Stellenbosch in the Hottentots Holland mountains, the source of the Palmiet-river marks the starting point of a gem of a valley. The naturally-formed waterslides down waterfalls fall into amazing rock pools, leaving jumps ranging between 3 and 20 metres to help you release your adrenaline-valve in this beautiful canyon. You’ll be busy for anything between 5 and 8 hours, depending on the “escape-route” you choose to take out of Suicide Gorge. There is no variation of trails here, and once in, it’s rather difficult to get out.

Near the start of the gorge, there is a point at which one can decide how much adrenaline you want to experience on the day. I will advise those not feeling brave to head down Riviersonderendkloof – a little less daunting than Suicide Gorge.

Once in the gorge (which ever one you choose), it is rather difficult to escape. Clever option would be to take a dry bag for the day, because everything will definitely get wet.  My trusty Sea to Summit Ultra-Sil drysack did the trick. As the water in these canyons usually tend to be a bit cooler, a wetsuit is also recommended, especially from March onwards. The warmest months are January and February.

It is highly recommended to do this adventure with the help of a guide, and at least in a group. The dark mountain water makes it difficult to see underwater, and is therefore impossible to see any low-lying rocks beneath the water-surface. Be safe and hire a guide, or you might be strolling away from the gorge in a wheelchair (and sadly not returning to it). A guided tour can be arranged through Frixion Adventures, a company that will make sure you are going down the gorge in a safe and responsible manner. Whether you are doing this with a tour guide or without, it is always recommended to wear a safety-helmet. Again, a guided tour with Frixion Adventures will be able to provide this.

The canyoneering experience in South Africa goes much further than Suicide Gorge. Another popular destination (and rather more commercialized) is the Crystal Pools close to Gordhan’s Bay in Cape Town. Parking your car right next to the start of the trail will leave you with a short 3km hike to gigantic rock pools hidden away in mountains overlooking the cold Cape-sea. Jumps going as high as 27m should always be taken with caution.