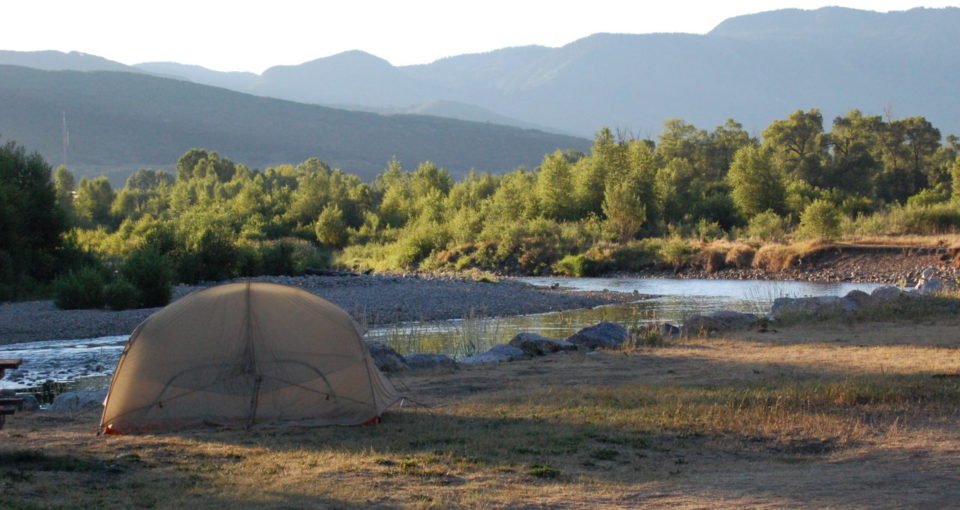 I arrived in downtown Steamboat during a few weeks before London’s 2012 Olympics utterly bewildered – a Brit lost at sea. A few days before flying arriving to the Mile High City of Denver, I fell from my bike, breaking nothing but tearing skin off my elbow and left thigh. Arriving in a sweltering Steamboat with my gash weeping and the sun bearing down, I was in every mood to book into a hotel and crash through a price category with utter disobedience.

In a last gasp of hope and several hours of daylight hours available to me, I chanced it, arriving at the doorstep to the HQ of tent maker Big Agnes just off the main drag through the town. Steamboat is surrounded by campgrounds, and with the bare-minimum of equipment, a good night’s rest can be had during warm summer nights at 2000m above sea level.

Thought Steamboat is some 200 miles by road from Denver, it has developed a network of small businesses deep in the Yampa Valley between Rocky Mountain National Park and Yellowstone. Big Anges is one such company, carving a global reputation beneath a solar-panel loaded roof with two other outdoor brands, Bap and Honey Stinger.

The trio form a bustling hub of adventure activity in the famous Little Red House, offering an oasis to any weary traveller, not least one looking for overnight accommodation. Indeed, my efforts came good – leaving with a “borrowed” 2-person tent from Big Agnes, I took the free local bus to the nearby Steamboat Springs camground, found on the northern reaches of the mountain town.

Given that there is no hostel in Steamboat, I accepted the $30 per-night entry to the resort content that WiFi, hot showers and a simply unbelievable setting on the Yampa River were well worth paying for. Added to this, the campground was also barely occupied, meaning no RVs and plenty of space for me to contemplate my last-minute accommodation setup.

One piece of attention to detail which I appreciated: each shower cubicle had a fold-down bench and a towel hook so that my clothes didn’t get damp while I showered, and were easily retrieved once I emerged. A small detail, but one that makes all the difference in the early morning when privacy is part of the rulebook and all you want to do is spread your stuff about.

If you’re looking for something more than a tent site – or haven’t been as lucky at Big Agnes – single room cabins are just over $60 with tax, while cabin cottages come in at around $100, also including tax. If you arrive after 8pm and there are still camping sites available, you can choose your own place for your tent and pay the next morning.

This handy map of the campground gives you an indication of where to get the bus from once you are staying at the resort. The bus runs from 06:33am to 11pm, seven days a week, 365 days a year. There is only one route that heads through the downtown area, which serves as a mid-point between Steamboat resort, to the south-east of town, and the campground in the north.

Getting to Steamboat itself isn’t easy; there’s no Amtrak connection, nor Greyhound. Airport shuttles from Denver airport are the best option.