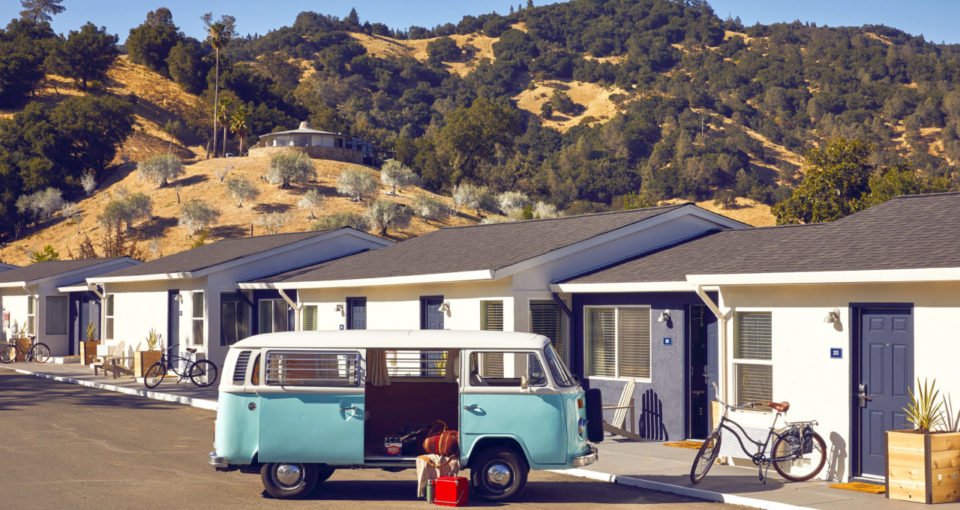 Leave the San Francisco Bay Area and follow the Napa River upstream and you’ll arrive in Calistoga 30 miles later, having passed through the greater portion of California’s prized valley. Since the spark of Napa Valley’s premium wine industry after the momentous 1976 “Judgement of Paris” blind tasting, the land on either side of the narrow waterway has become some of the most highly valued viticultural regions in the world. The same aspect also contributes to the area’s reputation among Northern Californian cyclists and runners who flirt with Napa’s hillsides throughout the year.

Found between wine and endurance sports is the belly of the Napa experience, made up of its hospitality and cuisine components. Already built out with educational institutions like the Culinary Institute of America and boutique offerings from the world’s major hoteliers, these twin offerings satiate an international crowd of tourists wandering north of the Golden Gate Bridge.

One of the latest hotel openings is the converted Sunburst Motel, now Calistoga Motor Lodge & Spa. The renovated 1946 building continues to embrace its roadside history in a new era for mid-century aesthetic, half a mile north of the Calistoga’s main crossroads. When describing the hotel, it would be hard to avoid a mention of Wes Anderson inspirations – the many pastel colours and bold typography make for a striking first impression, with details of 50-bedroom hotel diving a little deeper.

Fronting the property is a long row of nearly 40 of the hotel’s bedrooms, with a reception placed at the midpoint of the column. A restaurant is being developed opposite the reception area, creating a gateway to more bedrooms on the south side and the hotel’s spa and pool facilities to the north. This orientation sets the spa and its three geothermal pools as a centre of gravity for the updated real estate, fed by the same natural springs which the 1946 Sunburst Motel squandered.

Subsequently, the MoonAcre Spa and Baths will no doubt be the focus for most guests staying at the motor lodge, the same facilities being available to local members too. Experienced spa types will enjoy the spa’s approach to mud bathing, “In our little mudocracy, we eschew troubles in favor of bubbles and mud is slung the way it was meant to be done.” This technique equates to the Perfectly Muddled treatment: 1. mix-your-own mud formula 2. spread it over yourself with a brush 3. lie on one of the deck chairs (let sun bake) 4 wash off. Environmentalists will appreciate that this is a far more ecological way or doing things, compared with jumping into an entire tub of sulphuric mud.

Other features of the spa extend the quirk factor of the MoonAcre Spa and Bath institution. Four clawfoot tubs pin down a large tiled bathroom with rubber ducks in their natural habitat. Detox / Retox sessions pay tribute to the motor lodge’s Calistoga terroir, including, mud, steam and Blood Mary or Mimosa refreshment. Meanwhile the three mineral baths are heated to different temperatures, each meticulously published on the hotel’s website. The poolside area may also heat up with occasional pool parties, floaties and volleyball.

Retreat to your bedroom for more fun in furnishings and finishes. 24 suites at Calistoga Motor Lodge & Spa include a 1960’s VW-inspired seating area which converts into a double bed. The words of designer William Harris summarise the playful approach best, “It’s just super cheeky and fun.” Ingrid Summerfield, president and partner of Filament Hospitality who purchased the property and involved New York-based design agency AvroKO, is more cynical, inviting New York-based design agency AvroKO to create a “sense of nostalgia… meant to counterbalance the gadget-happiness of today.”

In 2018, the hotel will launch Fleetwood, a restaurant with an open, wood-fired kitchen, beer garden, outdoor picnic tables, and fire pits. In the meantime, grab snacks prepared by the local Palisades Deli Cafe in the hotel’s reception / lounge area.

The comforts of Calistoga Motor Lodge & Spa are balanced by some rigorous terrain for road cyclists, mountain bikers and trail runners, with road runners and track athletes welcome to the quiet farm roads and a local athletics track at Calistoga Junior-Senior School. Here are some highlights.

Though Robert Louis Stevenson modelled Treasure Island on a garden in Edinburgh, Scotland, a slab of state-managed park has been named after him to the north of Calistoga, presumably because he chose the mountainside for his honeymoon in 1880. The 13.2km Oat Hill Mine Road works through this terrain, originally connecting Calistoga with the cinnabar and mercury mines in 1893 after a 20-year construction process. The trailhead is a stone’s throw from Calistoga Motor Lodge & Spa, a stumble right out of the property before the sharp climb begins.

A gruelling 5.3km / 8% up Oat Hill Mine Road is good for mountain bikers and trail runners. Seven miles up the 29 is the northern portion of Robert Louis Stevenson State Park and a route up Mount St. Helena (1323m), also something in the order of 8km / 7% for trail runners. Road cyclists can also head in the same direction up the 29 for climbs out of Napa Valley.

Alternate between time on the trails and timed sessions on the track at Calistoga Junior-Senior School, less than half a mile from Calistoga Motor Lodge & Spa. The 400m cinder track also harks back to mid-century athletics.

On the other side of the Napa River is Bothe-Napa Valley State Park, home to a pair of trail running races organised at the end of April by Scena Performance. Select a 10km or 10 mile option and use Calistoga Motor Lodge & Spa as your base.

The most secret gems around Calistoga can be found through picking the brain of Chris Hilburn who has raced amateur in the NorCal circuit and now heads up the MoonAcre Spa and Baths, and Calistoga Bikeshop whose range of premium road and mountain bike rentals will be worth a tasting, not forgetting their curated collection of local loops.

Browse details and book at calistogamotorlodgeandspa.com.