Exhibition Charts a Traumatic Evolution of Californian Water Use 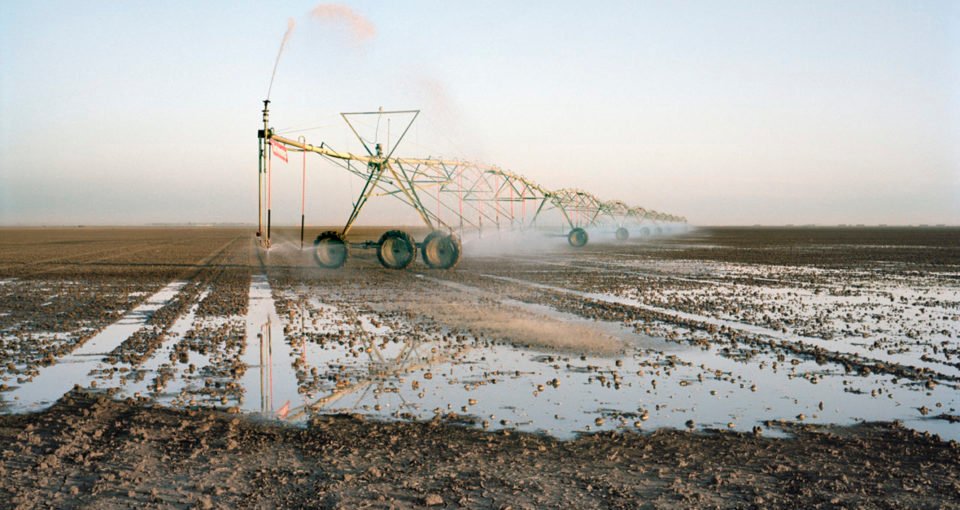 Stumble half a block from the campus at University of California, Berkeley and you might be lucky enough to fall into one the city’s most serene reaches. Completed in 2009, the David Brower Center is a magnificent piece of building design, integrating technologies like underfloor air distribution and rain water harvesting around a cool concrete frame. Thanks to these efforts and LEED Certification, the space provides a credible home for conscientious projects, including its latest installation, Art/Act: The Canary Project, a multi-disciplinary collection of pieces that engage with environmental issues in California.

A series of six posters along the front wall draw you in from the sidewalk, providing a vibrant and motivating welcome. Selected from a workshop with Creative Action Network and Patagonia’s San Fransisco store, community members were asked to think about engaging their peers around environmental issues. In one print, a deer with widened antlers spelling the caption “Vote the Environment” (Katie Vernon), in another the same annotation within a falling drop of water in One Last Drop (Laura West).

Yet the centrepiece of the exhibition hangs towards the back of the concrete atrium, in the the form of Water Gold Soil, a sequence of photographs and illustrations from Susannah Sayler and Edward Morris, the lead creatives in The Canary Project. To bring the images into a common narrative, Sayler and Morris gathered short text excerpts from a wider variety sources, printing them beneath photographs alongside their own contributions, written in a mytho-historical voice. By combining the history of California with nods to the future, the artists manage to gather the flames and furies of a region that has stretched and strained ever since it was first discovered by Europeans. Though most of the images were captured in the present day, Sayler and Morris make the most of nuances by using their frames as inspiration for themes within the historiography of California. In a first photograph, a blanket lies beside a concrete limb of a freeway in Sacramento, “where the roads and rivers came together, I-5, running north to south. I-80, running east to west.” It’s this confluence that the artists use to surface Karl Marx’s Capital and the lure of temperate zones, “the fertility of the soil… the differentiation of the soil, the variety of its natural products, the changes of the seasons.” To Marx, seasonal environments allowed for the wilful domination of humans over nature and the pursuit of surplus, a propensity that was altogether crushed in the “lavish” and “luxuriant” tropics.

The unknowability of the neglected blanket is mirrored by the myth of the island of California, first conceived by Spanish author Garci Rodríguez de Montalvo in the late 16th Century as kind of “paraiso terrenal”, an Earthly Paradise. Ten years after Montalvo’s invention, explorer Hernán Cortés used the writer’s tale to receive sponsorship from Charles I of Spain to take an expedition towards the land of riches. Despite its disturbing setting and emptiness, the object of the blanket serves to symbolize the lure of the pioneers as they crept across to the edge of the North American continent, with its numerous titles — “Polar. Blizzard… Chappywrap. Velvet Plush.” — underscoring the fluidity of its true value.

Sayler and Morris’ series gathers substance with two photographs that face the castaway blanket, connected by their flecks of gold. Next to a rushing stream, a clump of river grass is illuminated one July evening, a fortune that the artists use to highlight the differing interpretations of this natural feature. For Maidu Indians, the water’s life encompasses the movement of the forest and the nature it supports. Whereas European values deemed the discovery of gold in the waterway on January 24, 1848 to provide justification for its cooption into a history of capital endeavor. William Shipley’s translation of The Maidu Indian Myths appears beneath this photograph, listing poems that convey the altering of water’s flow as a kind of blasphemy.

Next to the image of the river grass is a photograph of the former headquarters of The Money Store, located at the confluence of the American and Sacramento rivers. Built in the shape of a ziggurat, the temple form of the Sumerians, Babylonians and Assyrians of ancient Mesopotamia, the building represents the attempt to institutionalize the value of gold after its discovery in the 19th Century. Though the real value of the raw material fluctuated greatly, accounts from John Sutter’s The Discovery of Gold in California cites the inexorable march towards the ravines.

So soon as the secret was out my laborers began to leave me, in small parties first, but then all left, from the clerk to the cook, and I was in great distress; only a few mechanics remained to finish some of the necessary work which they had commenced, and about eight invalids, who continued slowly to work a few teams, to scrape out the mill race to Brighton. The Mormons did not like to leave my mill unfinished, but they got the gold fever like everybody else.

Beyond these three touchpoints for California’s mineral history, the exhibition continues by photographing the appropriation of land for agriculture, and the industrial water systems set in place to ensure their fertility. One pair of photographs captures the inside of water facilities that funnel and pump water against its natural course. To their right, a parched San Luis Reservoir in 2014, low after a three-year shortfall in precipitation, and adjacent, a broad photograph of a field in the San Joaquin Valley being watered at industrial scale, desperate measures to overrun nature with logic. This relentless control grazes hard against the shuddering realisation of the agricultural industry’s adulterous subversion of nature.

Held beneath the vaulted ceiling at the Brower Center, this provoking exhibition connects California’s bountiful waterways and their role within the Golden State’s water management system. In a gold leaf series, stacked in a single column, calligraphy refers to German philosopher Martin Heidegger’s concept of technology as a “standing reserve”, with water representing another easily exploited aspect of the natural world. Through the exhibition and their broader work in The Canary Project, Sayler and Morris do well to aggregate a variety of values and practices that continue to be brought to account by anthropogenic climate change.