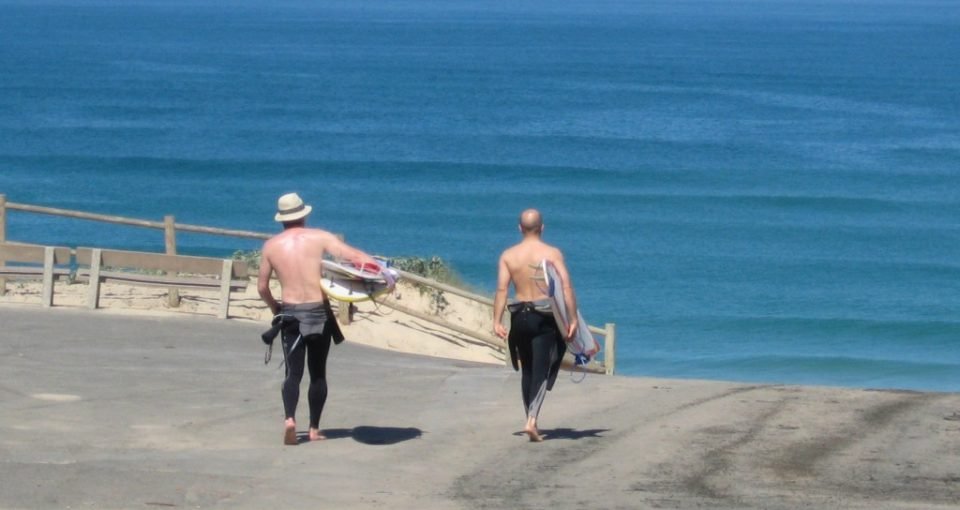 Wedged between Spain and France, the Bay of Biscay offers a wide variety of world-class surfing hours from major transport connections from the UK. Apart from the epic convenience of northern Spain and south-west France for most of mainland Europe, excellent cuisine, culture and scenery have brought a community of water and wave lovers to the region.

Now firmly established on the world surfing map, the area has become accessible on a budget with simple accommodation gaining popularity in this burgeoning adventure playground. The Bay has excellent surfing conditions from May through until the end of August so with plenty of time on our hands, Graeme Hutchison and I headed to the region last summer.

During our three week trip along the coast, Graeme and I stayed in campsites that provided basic facilities including showers, bathrooms, toilets, washing facilities, barbecues, and usually a small shop where we could restock. Guests are allocated a patch of ground for parking and pitching tents. In some campsites electricity can be purchased from reception, while others had places to charge appliances in communal rooms. Most campsites are near to the beach and most owners speak at least basic English. If you plan to stay during the peak season, it is important that you vacate your site by the appointed check out time because other guests arrive pretty quickly after check-out.

June and July are the busiest months for tourism in this region so plan well in advance if you want to secure your chosen accommodation.

From Santander the best surf you will find is east. A short distance along the coast is the small coastal town of Oriñon with a large campsite right on the beach. The smaller waves can be found straight through the surf at the front of the bay, with the larger waves breaking off the easterly point nearer to the rocks on the right. The best way to get to the waves is by driving east along the N-634, looping round past the estuary, underneath the motorway to the harbour where you enter the water down the sea stairs (as the crow flies, only 1km from the campsite). This is a popular place to surf with medium sized waves, so respect the locals.

Further east is the famous Basque city of Bilbao home to the world famous Guggenheim Museum which is worth visit and is free to enter on Sundays.

North of Bilbao and Gexteo is the surfing town of Sopelana where you can find a surf shop and a handful of places to grab food. The beach is to the north of the town,  with surf coming in with fairly big waves, some crowds and lots of bodyboarders. From Sopelana there is a short tram ride into Bilbao for some evening entertainment.

Gorliz is just north of Sopelana and has a campsite called Arrien, which is a short drive from a nice busy, local town. There is a beach by Gorliz which the local surfers used which has fairly small waves with long periods.

Further along the coast is the world-renowned beach of Mundaka. Its reputation speaks for itself as one of the locations on the ASP Billabong Pro Tour. Mundaka is a beautiful fishing village with many restaurants serving fine local cuisine. It has a great campsite and a fantastic surf shop called Mundaka Surf Shop where you can ask about the local breaks.

It’s best to paddle out below the harbour because the strong current when coming out of the harbour can take surfers into some dangerous currents. There is a great left-handed break at this beach, although it is hard to get back to once surfed because of the strong current. Use the channel on the left hand side of the break to paddle to the back of the surf. The locals know how to surf this beach so it’s best to follow what they do and ask them what the best options are on the day.

Breaks and places to go in South West France

Guethary is 15 minutes south of Biarritz and with some of the best surf around there are plenty of campsites around this area which have easy access to the beach. Camping International has great facilities and is about 2 minutes drive to the beach. The spot is at a really nice left hand break on the left hand side of the beach, beside some rocks. Luckily the lovely big left hand break directs itself away from these rocks to bring a long ride. Sometimes gets crowded, but definitely worth checking out.

The 300+ km coastline from Biarritz to La Rochelle has many breaks and towns to go check out, including the vibrant town of Hossegor, which is a surfer’s paradise. This diverse town includes a nice beach with decent surfing, loads of surf shops, and great nights out. This is an awesome place to meet other like-minded people. The campsites scattered up along this coast are all very similar with cheap prices and reasonably priced food. The surf up along this coast is very similar between towns but if you go look hard you will find some absolutely cracking surf spots, with a variety of left handed and right handed breaks. Many of these will be un-crowded, and completely yours to play with. Some spots to check out would be Biscarrosse, Lacanau-Ocean, Mimizan, and Le Penon which are all located on the map below.