Bernard Hinault & Counterculture on the Cobbles 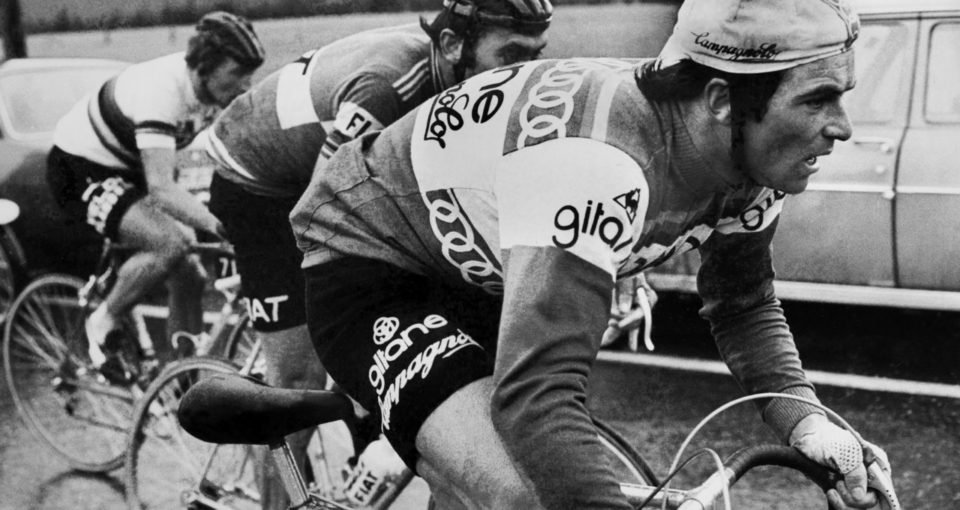 The cobbled classics have a habit of surfacing some of the more incredible stories in cycling. Cobbles, dirt and an unknown amount of capricious weather systems elevate Belgium and northern France to an ethereal level within the sport during the few weeks that precede the grand tours.

Many of cycling’s great athletes have set their legacies during the classics, leaving a mark through the manner of their victory and contribution to the history of the event. Starting with E3 Harelbeke, the cobbled races roll through Belgium with Gent-Wevelgem, the Ronde van Vlaanderen in Flanders and, in an ultimate climax, the punishing Paris-Roubaix.

The race to the velodrome at Roubaix is often cited as the oldest and most prestigious single-day in professional cycling. In recognition of this, race organisers since 1977 have issued winners with a granite block to resemble the surface of the ‘Hell of the North’ race, an ultimate gesture of tough man acceptance.

In the spring of 1977, a young Breton, Bernard Hinault tucked into his first major classics bid. The young rider ended up being victorious at Gent-Wevelgem and in another spring classic, Liège-Bastogne-Liège. A year later, the cyclist rode his first Tour de France and won, the beginning of a string of wins in the grand tour in 1979, 1981, 1982 and 1985, enough to turn his career into French legend.

Hinault’s story has been reignited in a beautiful series of photos, “Hinault“, including tales collected by Ruben van Gucht into a 208-page hardback tome. Tracing the rider’s journey from junior championships to multiple grand tour victories, the book recounts a golden era in the cycling, one that overlapped with Eddy Merckx and led to the increasing professionalisation of the sport. Covering Hinault’s career to 1986 and days with American Greg LeMond, van Gucht’s account testifies to Hinault’s ability to create a new French hero on the bike.

Known for having a determined opinion, Hinault wasn’t afraid to hide his views about the way the professional sport was going. During the 1978 Tour de France, the rider led the peloton in a strike against the wild logistics of the race, questioning the age-old notion that the grand tour should be so difficult that only one person should finish.

Later in his career, the rider begrudgingly took victory at Paris-Roubaix more out of sense of duty than any respect for a race that he considered to be ‘A circus, a load of crap’, a comment which affirmed his sense of independence. Indeed, this year’s Paris-Roubaix race saw scores of cyclists jump the high-speed level crossing when barriers were down, surfacing rider-led debate around safety.

Though Hinault had his opponents, it’s this ‘do anything’ attitude that cycling fans came to love. When, in 1977, he fell into a ravine off the Col de Porte during the Critérium du Dauphiné Libéré, millions of viewers on TV watched aghast as the defiant Frenchman emerged from the side of the road, remounts his bike and goes on to win the stage.

The still photos that capture these moments set a precedent that deepen a culture of endurance. Hinault’s style and message has become iconic, serving as a gateway for the likes of LeMond and Spain’s Miguel Induráin who followed in his tracks. For any cycling fan, understanding the rider’s versatility and gusto adds a new dimension to the historic routes that were Hinault’s platform and playground.