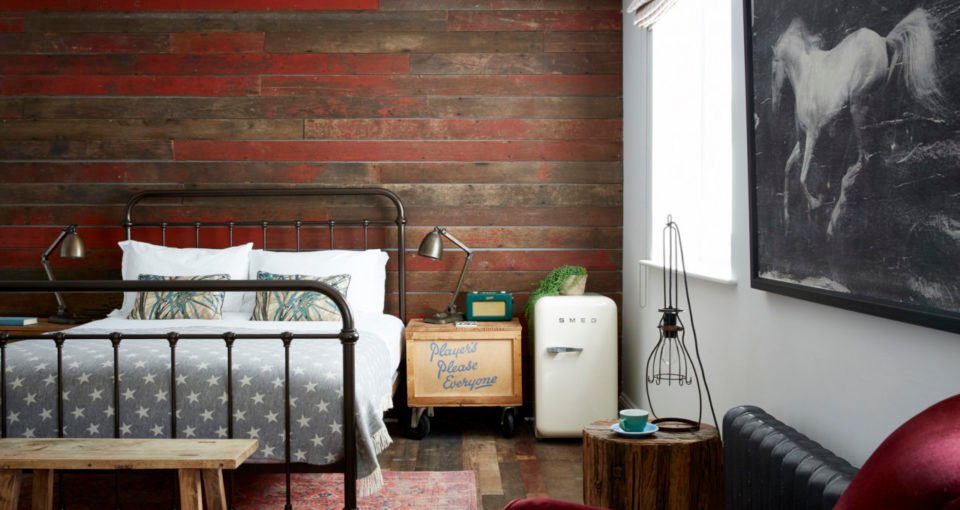 Those not quite sure of status of England’s most European-facing coast can find some certainty along the shoreline 60 miles south of London. Towns like Brighton have become escape routes for an increasing amount of professionals leaving the capital, attracted by lower rents and a comparable creative scene flanked by the pleasing worlds of coffee and good hospitality. Now with venues in London, Cornwall, Oxford and Brighton, hotel brand Artist Residence is part of the seaside town’s revivalist story.

The co-founder of Artist Residence, Justin Salisbury, was one original transplant, returning to Brighton in 2006 to help his mother run the family B&B. To provide a new lease of life for the property’s interiors, the young hotelier advertised the option of room and board for artists willing to put time into decorating and fitting out the building. The concept received hundreds of responses, so setting in place a model that has defined the group’s approach to development.

Facing Regency Square, the Artist Residence in Brighton does its best to balance out the disruptive British Airways i360 tower, an 80m structure that pokes into the sky between the hotel and the beach. Fortunately, the boarded floorboards and dense furnishings of the hotel take you away from tourist-tier distractions, passing you through the interiors of an impeccable venue and place to stay.

Though the townhouse-style entrance facilities are limited to the floorplan of the original home, the variety of unique bedrooms is remarkable for their general consistency and cohesion. Some Artist Residence standardisations have moderated the original impressions of early artists, yet the attention to detail in variety of furnishings, surfaces and decorations is remarkable, while not feeling over-played.

Bedrooms vary in size, aspect and configuration. “Tiny” and “Small” bedrooms appropriately up-sell their diminutive place in the hotel, while Comfy rooms offer more expansive dimensions. Five bedrooms have sea views, including one with a balcony. In the basement of the building, “Below Deck” rooms are sunk into the foundations, and include two rooms with a 4-bunk setup to suit adventurous crews willing to share quarters. All bedrooms are clearly described and photographed on the website, with notes about artist inspiration and a quick visual glimpse into the general direction of their aesthetic.

Food and drink are important pillars of each Artist Residence, catered for at the The Set, a restaurant which is the hotel’s immediate neighbour. Head chef Dan Kenny rotates The Set’s menu around the seasons, with local British produce defining dishes as well as some quirky items from further afield. An unusual breakfast menu reaches east to Middle Eastern shaksuka, while also diving into more local classics with black pudding, hashbrowns and Welsh rarebit. Stay for lunch for even more eclecticism, or bookend a hard day of training with a cocktail at the bar (called “The Fix”, but part of the same space).

Venture beyond Regency Square for coffee at the secluded The Plant Room, 300m east of the hotel in the direction of the town centre. For supplies, pass through Infinity Foods, a local co-operative with a brilliant spread of ethical produce. Their sister eatery is also around the corner, Infinity Kitchen.

Without doubt, Brighton’s constellation of restaurants and coffee spots is best enjoyed around a continued training schedule. Here are some training notes for runners, cyclists and swimmers visiting Brighton for work or a weekend break.

Runners have three options. Either make the most of the seaboard which, though continuous and pedestrianised, is congested with disorientated visitors even on the quietest of days. A second option is an athletics track, Withdean Sports Complex, located three miles to the north of Artist Residence, a 15-minute drive or 30-minute bus (this isn’t the track for the leading local club, Brighton & Hove). Finally, a third option is to hit the trail by striking north into the South Downs National Park. The Brighton Trailblazer route is one simple route idea for those looking for 10km of trail running.

Cyclists can join Brighton Excelsior Cycling Club, who set out throughout the week from a meeting point Shoreham Airport, four miles to the west of town. Or ride indoors at cycling studio, Rox Life – their studio is half a mile to the north-west of Artist Residence.

Find swimming lanes at Prince Regent Swimming Complex (25m), but be sure to check open swim time on their website’s calendar (or call). Though lanes are generally open from 6:30am on most days, the schedule does vary. Lockers take £1 coins and a single swim is £5.10, which also grants access to a gym, open from 6:30am until 9:30pm.

Alternatively, saunter out of the hotel to make your own laps around the shallow waters of the swimmable English Channel (water temperature). Brighton Swimming Club dip each morning, using changing facilities immediately to the east of the Pier. While you’ll need a membership to gain locker access at the beachside clubhouse, dropping in alongside the swim join is allowed (just leave your valuables at home). BSC’s website has detailed information about the swimming conditions around Brighton Pier, including water quality and safety. As for organised events to make the most of your trip to the seaside, Brighton Pier Open Water Swim takes place over the final weekend of July.

I visited room #25 which features in this post. For more information on Artists Residence, visit artistresidence.co.uk.