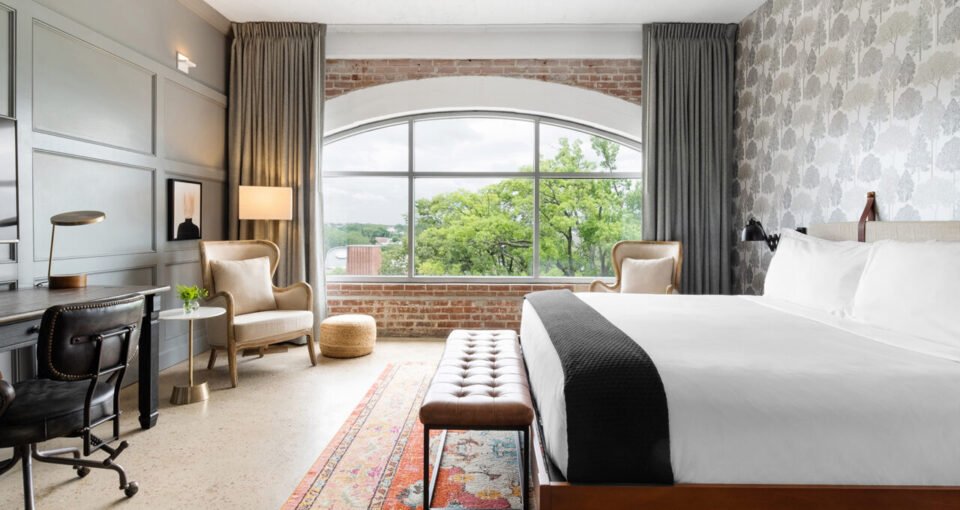 Memphis’ role in the making of America is varied. At one point its cadence was slow and gait heaving, with cotton tugged upstream along the Mississippi from plantations in the South. From 1873, Memphis became a primary marketplace for trading cotton, the centre of a fledgling and soon steam-enabled global market. Other moments are fleeting – the assassination of Martin Luther King Jnr. took place in Memphis, also in the neighbourhood from where rock and roll emanated from, with Elvis a catalyst. Today the city shepherds freight along the Interstate 40 – up to 40% of vehicles are lorries using the route to hurtle laterally between America’s great cities. Memphis the overseer.

At the end of 2020, Palisociety confirmed its acquisition of Arrive, adding hotel and restaurant addresses in Austin, Palm Springs, Memphis and Wilmington, North Carolina to a collection of a dozen properties across America. The 2021 opening of Arrive in Memphis has been quick to make a mark – a good location for observing Tennessee’s second largest city.

The hotel is centrally located north of Amtrak in South Main, a residential neighbourhood within walking distance but out of earshot of the raucous Beale Street. Look west to the Mississippi and you’re on the expansive Tennessee Valley Trail with a 4-minute jog.

Made up of 62 guest rooms, a broad lounge, specialty coffee bar and sub-basement bar, Arrive is a force in Memphis. Recent renovations have opened up walls to reveal original brickwork, while also inserting fresh furnishings with a dense, industrial feel. Copper taps and re-purposed industrial parts make up other furnishings in large bedrooms.

Room types have a narrow span, with no snug, solo options or luxury penthouses – an egalitarian approach with entry level rooms providing ample floorspace for stretching. Studios start at 29m², getting bigger in three tiers. Double rooms include two Queen beds, while a corner loft takes top prize. A generous 3pm check-in allows you to get in that afternoon nap, and 11am check-out provides scope for a morning session and shower.

Dining options include coffee bar Vice & Virtue, Hustle & Dough for with homemade breads and pastries, as well as Longshot for simple bites. Also located in the entrance lounge is Bar Hustle, a cocktail bar that doubles as a dining area and hotdesk location during the daytime.

Memphis River Parks have introduced a paved riverside path that provides a convenient way out of town. Longer runs can involve the pedestrianised Memphis-Arkansas Bridge – Big River Trail opens at the exit point, to the north (Google Maps). Running tracks are located to the East of Memphis’ downtown, several miles from Arrive’s doorstep so may not be worth involving in your trip.

If you’re looking for a running group to join, check into Grivet Outdoors. They have half a dozen venues in Memphis and organise group runs on Mondays from the store at Oliver Street, setting out at 6pm. An autumn track series is also worth noting – keep an eye on their events.

Cyclists should link with with Memphis Hightailers for group rides during the week. Victory Bicycle Studio also offer studio cycling on Wednesdays and Fridays, with Sunday group rides rolling at 8:30am during the winter.

Swimmers can make the most of a free introductory guest pass at YMCA, Fogelman – also in Downtown. Lanes open at 5am with a 25-yard pool.

For latest pricing and bookings, visit arrivehotels.com. I stayed in Room 106 in April 2022