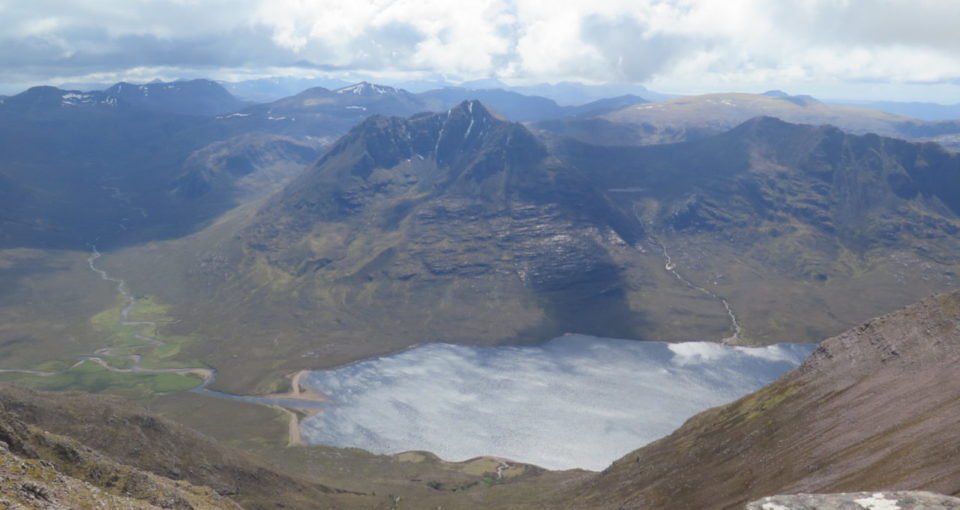 Saturday 23 May – Beinn Dorain & Beinn an Dothaid: The forecast was favourable and I was trying to get these two done in anticipation of Rachel’s arrival for lunch. Parking next to the Bridge of Orchy Hotel, a quick warm morning ascent offered great views from the top and I was back down for a pint in the hotel bar for 2:00pm.

Sunday 24 May – Beinn a’Chleibh, Ben Lui, Ben Oss, Beinn Dubhchraig: In hindsight, I feel slightly guilty for having chosen quite such a big day to introduce Rachel to the Munros, who had very kindly offered to give me some company on the hills for the day. In addition, for most of the day, the tops were shrouded in cloud. We experienced two river crossings, driving wind, rain and snow, and only caught glimpses of our surroundings on the way up the fourth and final peak of an 11 and a half hour day.

Monday 25 May – Buachaille Etive Beag: Stob Coire Raineach & Stob Dubh: After such a heavy day, an easier day was in order with the weather taking a turn for the better. The Buachaille Etive Beag ridge gave incredible views in the early afternoon and I was quickly down, fortuitously in time to see another hill-walker taking a tumble on a river crossing. Upon reaching him completely drenched, with a smile on my face, I asked whether a slippy rock had been the culprit…In good humour he confirmed that it had been.

Tuesday 26 May – Travel day up north: On my way up to the far north I stopped in at the Ghillies bar in the Altnaharra Hotel. Over a pint and a whisky, I learned from one of the farmers that this had been a particularly bad year for weather, even for Scotland! He described how there had been no spring, and the arrival of summer wasn’t looking promising. The grass hadn’t grown which had badly affected the lambing season. A regular fisher in the area had had to cut his fishing holiday short because of the cold (I have heard a common theme about the weather and conditions from fishing enthusiasts in the north and northwest). It was also interesting speaking to one of the Ghillies who had never been south of Inverness, and who had found that experience a taxing one. Returning to the car surrounded by a large number of deer, I headed towards Ben Hope.

Wednesday 27 May – Ben Hope and Klibreck: I had spent a night in the bivi at the foot of Ben Hope, since I wanted to have an early start in order to make the short drive down to get Klibreck done the same afternoon. This was a cold, wet and cloudy day with no views from the tops. However, I did unexpectedly meet another outdoorsman at the top of Klibreck in the cloud, waiting for a view. As it began to snow, I quipped that he could be waiting for a couple of days as I took out my winter gloves, and looked to head down. I seemed to have persuaded him to join me for the descent.

With the car full of wet gear, I headed to Elphin having heard about the Caving Club Hut there. Upon arrival, I discovered that the Derwent Mountaineering Club from Matlock had booked out the hut for the week. However, they were more than welcoming when they invited me to have a spare bed, which wasn’t being used. A very comfortable and well-functioning hut provided all the utilities you could need: cooking facilities, a drying room, a fireplace, beds & pillows, and showers (with hot water).

Thursday 28 May – Conival & Ben More Assynt: I went in company with Ed, a member of the DMC and fellow Munroist. A couple of rocky tops revealed how cold it had been. The rocks at the top of Ben More Assynt were covered in rime ice, found usually in Scotland only in the very cold of winter.

Friday 29 May – Seana Bhraigh: Described in the Scottish Mountaineering Club’s Hillwalkers’ Guide as one of three competing for ‘the title of the most distant Munro’, I committed to staying in Magoo’s Bothy on Loch a’Choire Mhoir. Parking just before Corriemulzie Lodge, the approach was in great weather. I left my rucksack at the foot of the Munro, as I had opted for the slightly longer horseshoe route, which provided a good scramble up the ridge above the Loch. However, losing myself in the cloud above 800m, I found myself on the next ridgeline along from the Munro, costing me in total nearly 2 hours. After retrieving my rucksack, I had to make a river crossing in order to reach the bothy at 7:30pm. I then had a personal triumph, starting my first bothy fire (and without firelighters), before a restless, cold, windy, rainy, dark and lonely night (but for the obligatory bothy mouse).

Saturday 30 May – Fionn Beinn: After the return from the bothy to the car, I drove to Garve to find a B&B before choosing a quick outlier to fill the afternoon, trying to make it down for the early Northwest Scotland dinner curfew of 8pm!

Sunday 31 May – Am Faochagach: A very boggy approach required yet another river crossing. Appalling conditions on the flat top brought strong winds, driving snow and very poor visibility. Upon reaching the river-crossing again on the descent, it looked like the weather had abated for the afternoon. Preparing for the crossing, having taken off my boots, socks, gaiters and waterproof trousers mid-route for the fifth time in a week, in the periphery of my vision, I noticed a very fast-approaching shower from the north. As I stepped into the freezing water, a curtain of hail smacked me in the face. This elicited a quick succession of expletives interspersed with the date and further expletives. The shower continued until I reached the other side. It certainly felt like the weather had been playing with me that day. I arranged that afternoon to make Aultguish Inn bunkhouse my base for the week. It conveniently has a bar and restaurant attached to it.

Monday 1 June – Beinn Dearg, Cona’Mheall, Meall nan Ceapraichean, Eididh nan Clach Geala: I couldn’t have asked for better conditions for the approach. Beinn Dearg, having a eponymous local beer which I enjoyed that evening, was covered in a fresh layer of knee deep snow at the top.

Wednesday 3 June – Ben Wyvis: After two big days, a more leisurely day up a well-pathed outlier was welcome relief. Having said that, the weather being clear all day still meant a strong, cold wind at the top. Putting my thick gloves on a little too late, my hands froze up properly for the first time. After half an hour, as I made it down out of the wind, I felt that nauseating feeling as my fingers began to thaw.

Thursday 4 June – (Fisherfield 6): (Beinn a’Chlaideimh – was a Munro, but no longer), Sgurr Ban, Mullach Coire Mhic Fhearchair, Beinn Tarsuinn, A’Mhaighdean, Ruadh Stac Mor: The ‘Fisherfield six’ had been a long-awaited day which I had been very apprehensive about. The SMC guide describes how the full round is ‘quite possible for fit hillwalkers in a single day, especially if Shenavall is used as the base for the trip’. My route was to extend this by two miles by starting from the main road. This famous group is a large horseshoe of (originally six, but now) five Munros, containing the second of the three competing for the most remote Munro. Setting off from the main road at 9am, I passed Shenavall Bothy at 10:50am. Dropping off my sleeping gear and stove, I moved swiftly on. This day involved three river crossings, over 20 miles of every kind of terrain: bog (grade 4 out of 5 on the Walkhighlands website), heather, boulder fields, rocky scrambles, and scree. Half way through the day it seemed there was one saving grace to the cold weather I had experienced so far; I had only taken a three quarter litre flask of water to save on weight, and I had already finished its contents before the ascent of the third peak of the day. Becoming increasingly conscious of my thirst and lack of water, I came across a small patch of snow with a fresh trickle pouring down the hillside…there’s nothing like fresh snow melt in times of thirst. The weather had been good until 4:30pm, when a light but persistent shower set in for the rest of the day. I had views until the final peak at just after 6pm. After which, I had a three hour return including the worst of the bog and two of the river crossings to tackle. I reached the bothy at 9:15pm very fatigued, but to a welcome of three other bothy dwellers for the night. It was a pleasant surprise seeing a candle lit in the window as I arrived, but jokingly being told as I entered that the others had been expecting someone else…who eventually arrived at midnight.

Friday 5 June – An Teallach Ridge: Sgurr Fiona, Bidein a’Ghlas Thuill: Though I was still very tired a relaxed breakfast with lots of tea in the morning on a bothy fire, meant a departure at midday. I had been hesitant about trying An Teallach, having heard rumours of outdoor enthusiasts having made fatal mistakes on the ridge. This mountain ridge also has a beer named after it, usually indicating something special. I was even more apprehensive, being worn out by the previous day and beginning the ascent of the shoulder to the ridge in overcast and showery conditions and in not negligible winds. However, part of my reasoning had been to avoid making the same approach another day, since these two peaks were not far out of the way in returning to the car. I would also have preferred to have seen an up-to-date weather forecast, but my bold decision was rewarded with a complete clearing of the weather 20 minutes after reaching the ridgeline, with near perfect conditions all afternoon.

Saturday 6 June – rest day (much needed) having notched up 51 Munros.

Sunday 7 June – An Coileachan, Meall Gorm, Sgurr Mhor, Beinn Liath Mhor Fannaich: A truly miserable day, albeit one I had been warned about with a forecast of a feeling of -13C with wind chill on the tops, and yes…to repeat this is 7 June. I stepped out of the car just before 11am into the rain, having had a relaxed breakfast. I returned at 7:30pm having had fewer than ten breaks in the precipitation of less than ten minutes each. This had ranged from initially moderate rain, to ‘fat’ rain, to hail, sleet and then snow on all four tops. Spirits were low having aggravated a pulled hamstring, and with cold, wet limbs. Everything from the waist down was inundated, the only item of clothing maintaining its integrity being my Arc’teryx jacket. My hands were so cold upon my return that, even after fumbling into dry clothes, I couldn’t turn the key to start the ignition.