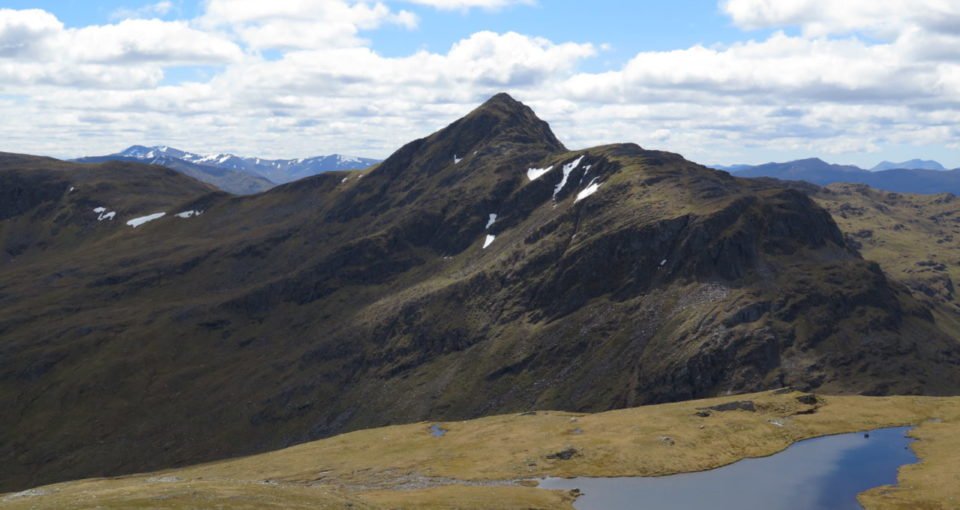 Monday 8 June – Slioch: After possibly the worst of day of weather I’ve experienced this summer, this day was in stark contrast, a warm and humid ascent until a fresh breeze and brief shower at the top. A long approach, but an enjoyable day out

Tuesday 9 June – Beinn Eighe: Ruadh-Stac Mor & Spidean Coire nan Clach: The previous day seemed to have indicated a change. Today was the first I experienced which resembled what I had envisaged would be the norm, in terms of weather, when I set out on this venture in the beginning of May. It was also the day on which it became much more apparent that the weather would dictate my mood at the end of a day more than anything else. The approach brought me across the ‘finest corrie’ in the Highlands, Coire Mhic Fhearchair. This also has the remnants of a ruined plane in ‘fusilage gully’, I later learned from a guide who confirmed that I had seen a large tyre partly submerged in the scree.

Wednesday 10 June – Liathach: Spidean a’Choire Leith & Mullach an Rathain: Spectacular views, especially over to Beinn Eighe where I had been the day before. Some fun scrambling along the ridgeline was followed by a couple of pints at the Torridon Inn later in the evening, where the young Australian staff seemed all to have learned my name…

Thursday 11 June – Beinn Alligin: Tom na Gruagaich & Sgurr Mhor: Three days of stable weather was unprecedented on my trip so far this summer. But it provided the opportunity for a very quick ascent and the chance to take some time with the camera on the scrambles on the three Horns following Sgurr Mhor.

Friday 12 June – Maol Chean-Dearg, Sgorr Ruadh, Beinn Liath Mhor: This was a long day in dry conditions. Having slept in the car the night before to make the day possible, a night at the Torridon Youth Hostel was welcome relief at the end of the day.

Saturday 13 June – Moruisg (+ Sgurr nan Ceannaichean): A short day, taking in a demoted Munro, I was very fortunate (with phone a luxury in northwest Scotland) in getting through to the warden of Gerry’s Achnashellach Hostel, an independent hostel and my favourite so far, providing the best supplied hostel fireplace I’ve come across so far.

Monday 15 June – Maoile Lunndaidh, Sgurr Choinnich, Sgurr a’Chaorachain: Another big day. I jogged much of the approach on a good path, the same as for the day before, which led to Glenuaig bothy, a garden shed by all accounts, next to the lodge at the foot of Maoile Lunndaidh.

Tuesday 16 June – Beinn Sgritheall: Initially I had intended this to be a rest day but the weather was set to deteriorate over the coming days, so I decided to tick an outlier off in low cloud, one which might at some point be revisited on a good day for a view out to sea.

Wednesday 17 June – rest day: I extended my stay next to the fireplace at Gerry’s whilst resting and taking advantage of the all so elusive wifi connection in northwest Scotland.

Thursday 18 June – MOT day: A trip via Inverness to have my MOT done, pick up a new pair of boots having worn down the soles of my starting pair.

Friday 19 June – An Socach (north), An Riabhachan, Sgurr na Lapaich, Carn nan Gobhar (South): A long day, after leaving Mullardoch Dam at 10:45am, the only person I came across (at the top of the third of four munros for the day) was a woman in what looked like her 60s or 70s who had taken the ‘ferry’ to the start of the walk at 8:30am. She made it back to the Loch Ness backpackers’ lodge at midnight, where I was staying as well. I admired the endurance required to be on the hills for such a long time, and on a cold, wet day with low visibility. On a side note, I saw the best set of antlers I’ve ever seen, with 12 points. Unfortunately, they were still attached to a rotting carcass, the smell of which I couldn’t remove from my nostrils all day…even after lunch.

Saturday 20 June – Sgurr na Ruaidhe, Carn nan Gobhar (north), Sgurr a’Choire Ghlais, Sgurr Fhuar-Thuill: When I met the notoriously stern-faced and stern-toned gate-keeper to Glen Strathfarrer who warned me that she would not be opening the gate to let anyone out after 8pm, smiling in response to the important message, I was inclined to see this as an extra challenge rather than a serious threat. A day of low cloud but good ridge line paths, it was interesting to chat with someone from the British Antarctic Survey at the top of the highest peak of the day.

Sunday 21 June – Sron a’Choire Ghairbh, Meall na Teanga: After nipping down to Glencoe again to meet Will for dinner the night before, I ticked off two outliers near Loch Lochy. The approach was slightly diverted as a result of quite major works on a hydro scheme being constructed, which had caused a significant change to the scenery for the approach up the glen, leaving much of the riverbanks bare of trees. On the drive to Saddle Mountain hostel I passed a well-kept Commando Memorial.

Monday 22 June – Carn Ghlusaid, Sgurr nan Conbhairean, Sail Chaorainn:
I prepared for heading over to Skye for a week with Rachel by a quick ascent of three summits in warm conditions, north of Loch Cluanie on the road towards Kyle of Lochalsh.