A Munro Epic: Skye (Part 1), Glen Affric and the start of Loch Cluanie 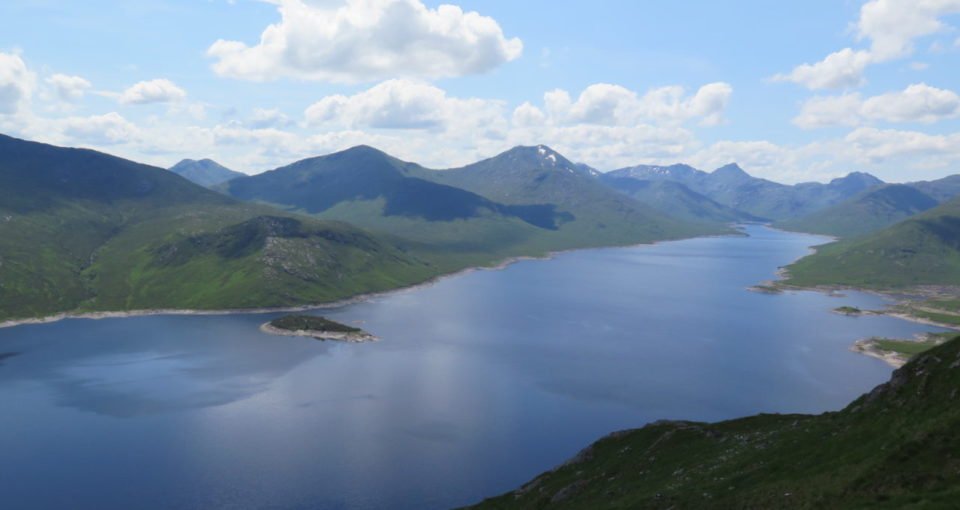 Tuesday 23 June – Pinnacle ridge fun: The intention had been to reach the summit of Sgurr nan Gillean. However, I ended up taking us (Rachel had joined me for my trip to Skye) up the Pinnacle Ridge route, and having reached the third pinnacle, progress could only be achieved by an abseil off old slings into a gully which I had no knowledge about. Additionally, I could not see where the abseil would end because of the cloud reducing visibility to 10 metres at most. This was the point of return to the Sligachan campsite. But it had been a day of good scrambling experience.

Wednesday 24 June – Bla Bheinn: Despite constant drizzly rain and a humid ascent we found our way past the misleadingly large cairn to the true summit indicated by a trig point visible only from 15 metres in the cloud cover.

Thursday 25 June – Am Basteir: A drier approach, but some careful scrambling needed on the greasy rock in order to reach the top.

Friday 26 June – Talisker distillery tour & lunch at the Old Inn: This day was a wash out. It had rained heavily for most of the night and this did not stop until midday. A rest day was well-received and a trip to the Talisker Distillery was an afternoon well spent, before heading over to the Glenbrittle campsite, next to the beach.

Saturday 27 June – Sgurr Dearg (In Pinn): Getting itchy feet about not maintaining a steady pace of Munro summits, we took the rope and headed for the In Pinn in the low cloud, showers and considerable wind. I expected to see no one out that day. However, before being able to see the summit I heard the voices of a guide and his client making the abseil off the top. The ascent was windy and the rock even more greasy than I had expected, but the low cloud meant that I could not gauge quite how exposed the climb was as I led us up to the top. The cloud cleared just as we were about to make the abseil down. Having a view from the top always seems to make a miserable ascent worth the hardship.

Sunday 28 June – A drive back to the Drumnadrochit backpackers lodge, washing and admin day.

Monday 29 June – Carn Eige, Beinn Fionnlaidh (south), Mam Sodhail: An enthusiastic start, with a river crossing and many frogs; a warm day and upon reaching the ridgeline a very enjoyable lofty day.

Wednesday 1 July – An Socach (south), Sgurr nan Ceathreamhnan, Mullach na Dheiragain: The second day in Glen Affric was possibly my longest approach to date. It was dubbed the hottest day we will have in the UK all year. This of course demanded a thunder storm in the Highlands at 1pm. Having felt a little like a fraud having not wild-camped since my first Munro on Mull, I planned to camp on the bealach separating the ridgelines of An Socach and Sgurr nan Ceathreamhnan. A sweltering day, meant I was out of water by just after lunch. I had the tent set up by 5, the point at which I had planned to call it a day. But given the clear evening and long daylight hours I set off for Sgurr nan Ceathreamhnan, taking only my water (found at a nearby spring), a camera, a map, an energy bar and my phone in case of any signal at the summits (…there was no signal). Running nearly the whole ascent I made the top by 5:45, managing to top up the water supply with some snow-melt along the way. At the summit, I decided that the evening was too good to waste, and set off for the third peak. I made it back to the tent for 8:30 having experienced views over to Skye, still with two hours of daylight remaining.

Thursday 2 July – Setting off in the morning before 10am, the descent via a look in at Alltbeithe Youth Hostel (the most remote in the Highlands) and the return to the car park at the east end of Loch Affric took over 4 hours. This called for lunch and a pint in The Slaters Arms in Cannich in great weather again.

Friday 3 July – Sgurr a’Mhaoraich, Gleouraich, Spidean Mialach: Incredible weather, I was in a t-shirt and shorts all day even at the summits, only managed once before back in Torridon. This was an enjoyable day in a remote area, with good easy paths, and ascents beginning from the roadside.

Saturday 4 July – A’Chralaig, Mullach Fraoch-Coire, Ciste Dubh: This day began in the rain as was inevitable to bring up Munro no.100. I duly celebrated this and Munro no.101, for no particular reason, with a swig of whisky at the top. I had been looking forward to Mullach Fraoch-Coire having seen it from a distance the week before on Sgurr nan Conbhairean. Whilst the ascent was enjoyable no views were to be had from the top.

Today also claimed my most embarrassing slip so far. I have had the occasional, innocuous and nearly-always regained slip on certain rocks or slippy turf or some snow patches, and never in precarious sitauations. But this day, only 10 minutes from the end of my descent to Cluanie Inn, which had represented a light at the end of a cloudy and gloomy tunnel back down the glen from Ciste Dubh, I tested the grip on the soles of my boots too far. Though following a stalker’s path on ground with a relatively flat gradient, I went for a rock with impossible angles in an attempt to avoid the boggy ground. Duly, my right foot fell from the apex of the rock and sank into a foot-deep pit of mud. Meanwhile, I was flung forward, my right elbow plunged into the same pit, and in a panic to avoid completely submerging myself, a less than elegant roll to the right down the hill a few yards saw my whole right side covered in mud. Fortunately, despite being only 10 minutes from the Inn and the main road, as far as I could tell, no one witnessed the event. All I could do to alleviate the situation, as I continued, was to imagine having seen myself take the fall from a distance, which proved more amusing than I had expected.