A Munro Epic: Monadh Liath, the Far East and the Mounth Plateau 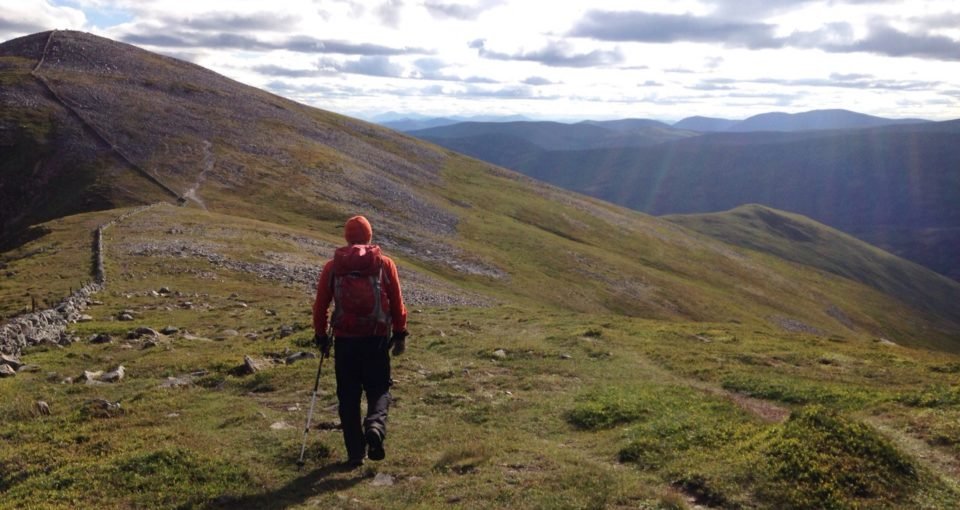 Monday 20 July – Geal Charn (north): Following a long drive up to Newtonmore via Sterling, I began the peaks of the Monadh Liath group, in cold and cloudy conditions. I found that the advice I had been given about some of the peaks in the Cairngorms being merely mounds on a plateau had been accurate, and in heavy weather, could have been easily missed.

Tuesday 21 July – Carn Dearg (north), Carn Sgulain, A’Chailleach: This day began with some sporadic drizzly showers, but brightened up for the afternoon. The approach was quite rugged after the bridge over Allt Fionndrigh. The ascent of Carn Dearg was steep towards the top. However, the three peaks were separated on the top of the plateau by some distance but only lightly undulating ground and a fence line to follow for most of the way.

Thursday 23 July – Beinn a’Chaorainn, Beinn Teallach: This began with a walk through Roughburn wood, and then quite a relentless ascent on rough ground up to Beinn a’Chaorainn and its three tops. From these there was a good over to the west side of Creag Meagaidh. The descent to cross Allt a’Chaorainn felt long before making another concerted effort for the summit of Beinn Teallach (albeit barely a Munro). This may have felt more laboured because of tired legs rather than actual difficulty.

Friday 24 July – Mount Keen (Halfway through the Munros): I decided to treat myself to just a single outlier for my halfway point through the Munros. The approach was in great conditions and very pleasant wearing only shorts and a t-shirt. However, this led me very deeply into a false sense of security in my estimation of how the weather would progress during the day, thinking I was too far east to experience the same fluctuations as on the west coast. Upon reaching the summit I chose to dismiss the signs of the dropping temperature and the dark looming clouds approaching from the east as those of a mere passing shower, putting on my waterproof top only. No sooner had I left the summit than a heavy and relatively long-lasting hail shower pelted down. This was followed by an incessant heavy rain which by the time I realised it would not be passing it was too late to consider putting on my waterproof trousers. When I reached the car, I was able to pour at least half a pint of water out of each of my boots. After 10 minutes of sitting in the car the rain completely cleared…

Reading a weather report that evening (which I had not had the luxury of the day before) I discovered that Scotland and the UK was experiencing a shift in the wind direction which had been from the North East that day.

Saturday 25 July – Driesh, Mayar: This was a quick day, knowing that the day would start off well but deteriorate later and that these two Munros are considered two of the easier ones to climb. I managed a very quick pace all the way up Driesh. Leaving the summit, I saw one group of walkers would be celebrating one of their member’s compleation of the Munros on Driesh. I had no time to waste seeing showers in all directions, though they were moving slowly. I made a speedy descent down a good path from Mayar, back to the car twenty minutes before the rains arrived.

Sunday 26 July – Broad Cairn, Cairn Bannoch, Carn an t-Sagairt Mor, Carn a’Choire Boidheach, Lochnagar: I had taken on a huge day to summit all the five Munros around Loch Muick. I ran the approach down the south east side of Loch Muick before a steep ascent to the plateau level and at the end of the day I jogged the well-pathed descent from Lochnagar, still only to return to the car at 8:15pm having begun at 10:15 in the morning. In addition, the weather was pretty dismal. I didn’t have a view all day and on the plateau, and shrouded in cloud, I spent most of the day looking at my compass, a shame given the promise of 360 degree views from the top of Lochnagar on a good day.

Monday 27 July – Beinn a’Bhuird, Ben Avon: This was a tough day with a huge approach. It took nearly five hours to reach the summit of Beinn a’Bhuird. Leaving my rucksack at the col ‘The Sneck’, I made a laboured ascent of Ben Avon constantly thinking about how far I still had to return to the car afterwards. The only others I saw that day I found at the top of Ben Avon. They had made a tough day much easier by cycling half of the approach.

Wednesday 29 July – The Cairnwell, Carn a’Gheoidh, An Socach, Carn Aosda: Rachel had arrived the evening before. I had said before her arrival that I would try to find some easier days to take her on than some we had done earlier in the summer. This turned into 6 (5 of which Rachel accompanied me for) of the longest consecutive days I did all summer. What could have been a very quick day, I turned into a day with quite a bit more ascent by adding An Socach into the circuit. This did save me a day though.

Thursday 30 July – Carn an Tuirc, Cairn of Claise, Tolmount, Tom Buidhe, Glas Maol, Creag Leacach: A day of six Munros was made an energy-draining day not by the distance or ascent especially, but more because of the boggy and heathery terrain. Fortunately, the weather was very good all day, particularly in the early evening.

Friday 31 July – Glas Tulaichean, Carn an Righ, Beinn Iutharn Mhor, Carn Bhac: The plan was that, since we had two cars, we would park one at Inverey, drive down to Spittal of Glenshee and then make a linear route back to the first car, picking up the other car at the end of the day. I knew this day would be long, but not quite as long as it turned out to be. Whilst no navigational errors were made the drizzly weather and coming across much more boggy terrain towards the end of the day really sapped away energy. The boggy trenches were quite considerable before and after reaching the summit of Carn Bhac. Having set off from Spittal of Glenshee (after an hour’s driving) we reached Inverey again at 9:10pm. This was a very draining day, knowing that we still had the other car to pick up. We only began cooking dinner on the stove at 10:45pm.

Saturday 1 August – Beinn a’Choarainn, Beinn Bhreac: Beginning at the National Trust for Scotland car park at the Linn of Dee, there was a straightforward approach until the boarded up estate lodge. The weather was generally good but for a 45-minute heavy shower on the fairly flat but very boggy traverse from the summit of Beinn a’Choarainn to Beinn Bhreac. As a welcome reward there was the right kind of scree slope to quickly slide back down to the pass which joins Braemar to Glenmore.

Sunday 2 August – Carn a’Mhaim, Ben Macdui, Derry Cairngorm: The weather held off until we reached the summit of Carn a’Mhaim for lunchtime, from which there was a good view over to Devil’s Point. Then the cloud level fell quite quickly and the compass came out halfway up on the bouldery ascent of Ben Macdui. At the top it was drizzly, cold and windy, but luckily there are plenty of shelters at the top. The traverse to Derry Cairngorm required a lot of compass work in heavy cloud, which also slowed progress significantly, but with the help of Rachel’s astute observations we made our way back to the path of descent, returning to the car for 8:30pm.

Monday 3 August – The Devil’s Point, Cairn Toul, Sgor an Lochain Uaine, Monadh Mor, Beinn Bhrotain: After a pretty awful night’s sleep having been the target of attack from the resident, marauding hoard of ducks at Braemar campsite, it was difficult to get up in the morning. From the same car-park at the Linn of Dee, having to make the same approach most of the way the next day, this time alone, with a steady jog, I made it to the summit of Devil’s Point in just under three hours. I had only intended to take on three Munros this day, and when I was shrouded in cloud from the start of the ascent up to Cairn Toul I had resigned myself to this being the case. Once I reached the top of Sgor and Lochain Uaine (Angel’s Peak) though, I felt like I had a lot of energy in reserve, so I pushed on preparing myself for another day of compass work, but after five minutes heading towards the col on the way to Monadh Mor the skies completely cleared and my bold decision had paid off.