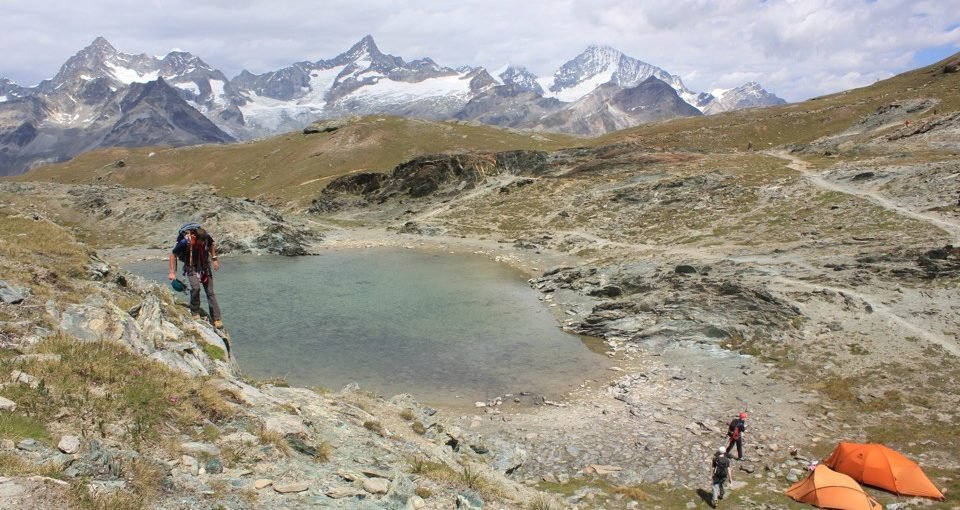 Seattle-based Mountain Safety Research (MSR) describe the 4-season Asgard tent as “the most liveable, 2-person expedition shelter we’ve ever made”.  In order to assess this claim and put the tent through some rigorous testing, Christian Hacking and I took the Asgard to Switzerland.

One feature of the Asgard is its unique Bow Frame geometry which allows the tent to resist high winds, even in mountainous areas. This was an invaluable element that we both placed confidence in, especially during the latter part of our expedition when we found ourselves battling through electrical storms.

Over and above the pure strength of the tent, it is extremely liveable. The Bow Frame is able to expand almost vertically, which maximises the main vestibule and allows sufficient head room when sat upright. The Asgard boasts two StayDry entrances which keep your outdoor gear dry even when the tent’s surroundings are wet or covered in snow and ice. The main vestibule provided a copious amount of space for the two of us. There are two storage nets adjacent to the interior roof corner and six pockets along the sides which proved to be incredibly useful for storing essential gear such as head torches, penknives and matches. However, whilst initially the two storage nets provided a good home for socks and goggles, during stormy weather the contents of the net were not held sufficiently and as a result we tended to just use the pockets. Another important feature of the Asgard for us was undoubtedly the two porches. The two-way zipper let us vent for storm cooking when we didn’t want to leave the comfort of our tent, a quintessential trait when faced with cooking breakfast during the early hours of an alpine start.

Pitching the 4-season expedition tent was done with ease, even during the adverse weather conditions that we experienced, and this was made possible by five ‘FastFeed’ tent poles that could be quickly inserted. The durability of the inner tent’s material provides peace of mind in knowing that the poles can be toughly fed through whilst leaving the inner intact. The Asgard comes with ten heavy-duty stakes that can be planted in most terrain; however, additional stakes must be purchased if you plan to sleep on snow or ice. It must be also noted that the tent only comes with two guy lines for attaching the top of the fly sheet to the ground, and so for additional stability it might be worth buying a couple more. Tent accessories including repair kits, blizzard stakes and extra guy lines can be found on the MSR website.

Weighing in at 3680g the Asgard is somewhat heavier than its Dragontail counterpart, another of the Explore Series tents, which comes to a mere 2534g. Nevertheless, if you can afford to carry that little extra weight on your expedition, you will feel that much more at home on the mountain. The Asgard is the most spacious 2-person expedition tent I have found on the market with a competitive price comparison. Certainly weigh up other options but be assured that the Asgard 4-season tent will give you that extra comfort on longer tours.

Find out more at msrgear.com