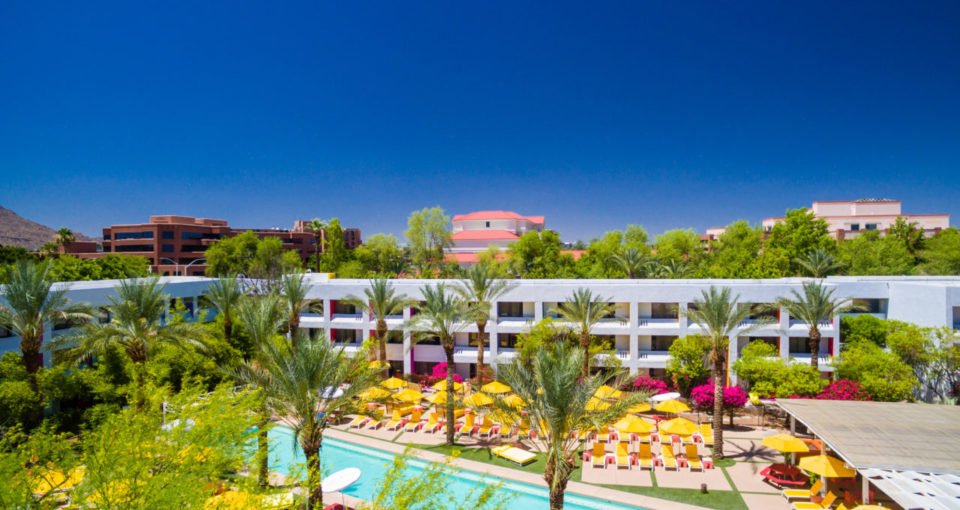 Imagining the American Civil War veteran and pastor Winfield Scott wandering through Arizona’s broad Salt River Valley in early 1888 requires a leap of imagination. After establishing churches in Kansas and San Francisco, the Michigan-born pioneer opened a new chapter in his itinerant and colourful life by purchasing 640 acres of land in the “veritable oasis in the desert.”

With the help of brother George, the land was cleared for farming and the community blossomed around Scott’s operation. Over a century later, The Saguaro planted its foundations on this hallowed turf, creating a designer hotel and refuge for travellers to the wider metropolitan area of Phoenix.

Scott would no doubt approve of the vitality and flavour of the hotel. 194 bedrooms surround a central swimming and lounge area, fully enclosed with pool temperatures in two tubs perfectly adjusted to the desert heat. This poolside atmosphere defines the hotel’s mood, but guests can also find themselves in the gym at any hour.

As for passive recovery beyond splashes of sun, the hotel’s in-house dining menu and spa options are robust. Breakfast pillars come in the form of avocados, eggs and Greek yoghurt, and a sidestep into buttermilk pancakes or waffle territory isn’t hard. Later, all-day salads and small plates are available for substantial top-ups. Thinking about treatments? Make it over to the spa to see what a Turquoise Sage Mountain Amica Massage is all about, or opt into the Prickly Pear Sugar Scrub.

It’s no coincidence that The Saguaro is also located in one of Scottsdale’s more trendy neighbourhoods and also the original setting for the early days of the Scott dynasty. If the pastor were to walk the Old Town streets in 2017, he might notice a number of the original buildings still in place. Perhaps he might also have found time for third wave coffee aficionados, Cartel Coffee Lab, or the bike-orientated cycling cafe, Regroup Coffee & Bicycles.

Rent bikes at Tribe Multisport – they also organise runs and rides, listed in an event calendar. For trails, Camelback Mountain is a priority – park at Echo Canyon Recreational Area then work over the hill to the East so you take on the more technical west edge before enjoying the gradual “back” on the descent. I ran on the road to get back to my vehicle – adding a little distance and running time. Swimmers can look to Cactus Pool, located three miles to the north of The Saguaro, and Arizona State University’s Plummer Aquatic Center to the south, also the site of Michael Phelps’ training pre-Rio.

Head over the thesaguaro.com/scottsdale for booking.