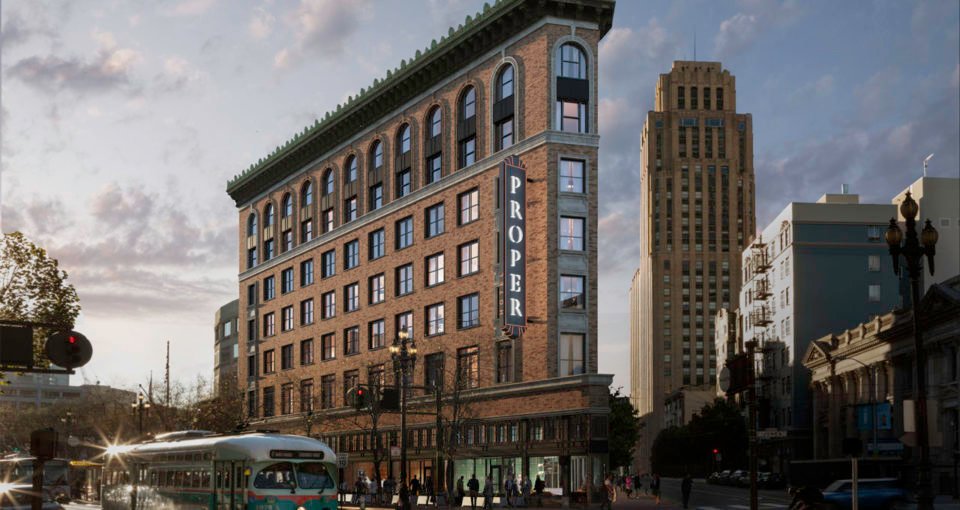 Only San Francisco’s most intrepid tourists will be familiar with the area surrounding Civic Center, merely blocks from the commercial heart of town and the home to major music and political venues. The fact that established behemoths of the hospitality industry have neglected the Civic Center / UN Plaza section north of Market Street signposts a lack of innovation from hoteliers and a missed opportunity; this slab of land is a virtual midpoint for the town’s east-west industrial axis, as well as its surrounding residential neighbourhoods.

While much of the city has experienced rapid gentrification over the past decade, the area south of the Tenderloin has an opportunity to learn from the mistakes of large commercial developers, meaning that San Francisco’s paucity of accommodation is being amended by design-orientated hoteliers. Proper Hospitality have turned up with impressive enthusiasm over the past two years, opening their first hotel in San Francisco to balance a residency play already in motion in the resurgent Columbia Square in Hollywood.

San Francisco Proper’s bold claim on the neighbourhood is framed by the flatiron Flood Building in San Francisco, wedged between Market Street to the south and McAllister to the north. Completed in 1904 for James Flood Jr. by École des Beaux Arts-educated architect, Albert Pissis, the building survived the 1906 earthquake and is now on the National Register of Historic Places. This status presented Proper with the task of retaining historical elements while making it amenable to guests already familiar with the realm of boutique.

As part of larger The Kor Group, Proper were able to sail through two years of updates, absorbing the expense of restoration while layering each room with impeccable design. Designed entirely by Kelly Wearstler, Proper’s San Francisco property sets the bar high, with some tasty design notes as well as the more functional aspects. Furnishings throughout the 131 bedrooms are dense and rich in texture, but spacious enough that impeccable design doesn’t overflow into cluttered inconvenience.

A sense of tactility is brought out further by effective portioning of rooms, such as they feel compact without feeling cramped, dotted with familiar luxuries in the shape of bottles from Aesop, Vifa speakers, handmade Aireloom mattresses and Italian Bellino linens. These creative elements are not without their more mundane and painstaking tasks, including the cleaning of all bricks and window frames on the building’s facade.

Perhaps its this subtle combination points to an era when spaces weren’t defined by their raw size but rather what or who you had in them. This might be what Wearstler refers to in this new zeitgeist from San Francisco, when “The spirit of pre-modernist European influence, hand-selected vintage furnishings, and works by local artists” cites references over and beyond the city’s current technology focus.

Beyond design itself, Proper has made a few nods to the future of hospitality. The small basement gym isn’t merely an afterthought but a continuous integration into the hotel’s basement facilities. As for lodging options for a new generation of design-sensitive tourists, standard rooms don’t enter at a horrible price and there’s even a snug bunk room for friends or colleagues travelling on a budget. Cyclists will be pleased to hear that secure bike storage can be arranged.

Catering options are similarly value-driven, with coffee, simple eats and a more complex rooftop bar clamping the 23 floors together. Villon is the restaurant on the ground floor with seating for 40 – also a footprint that welcomes visitors from Market Street. Local talent has been recruited to make the rooftop bar a sellable event – Josh Harris and Morgan Schick of BVHospitality are at the helm, the duo behind the Mission’s renowned Trick Dog cocktail bar.

San Francisco Proper isn’t alone in expression optimisms for the area. While Proper’s location does require a degree of agility for visitors, the choice of location is a balanced gamble with other hotels scheduled to arrive in the area over the coming years. Twitter and Dolby each have offices within 300m of the hotel, and Market Street is already a bustling thoroughfare for cyclists working their way to and from work in the Financial District. It’s among the pedalling locals that Proper hopes to get attention, the some 5000 cyclists who will now pass their Venus fly trap-like cafe at on the ground floor of the building’s apex.

We’ve documented a comprehensive San Francisco guide for cyclists, runners and swimmers visiting the city (subscriber-only), but for some hints for arranging your training from Proper:

Runners note that your best orientation-first route would be to go east on Market on foot or via BART, then swing anti-clockwise along the Embarcadero toward the Golden Gate Bridge. Make a note of the Proper’s location near to Leavenworth Street and hit that to swing yourself back south once you’re over on the waterfront.

Cyclists should make a similar route or jump up and over to Fisherman’s Wharf to then head west and over the Golden Gate Bridge. You’ll be at the Bridge within 25 minutes and will see serious riders head up Hawk Hill at the break of dawn throughout the year.

Swimmers – you’re best off jumping on BART at Civic Center and cutting south to 16th Street to Mission Pool, a heated outdoor pool. UCSF’s Mission Bay also has a wonderful outdoor tub that overlooks the downtown area but it would be easiest to get a cab there – it’s a zig-zag south of Proper, certainly navigable on one of the hotel’s Shinola bikes.

The brilliant bunk rooms are scarce and enter at $200 per night, with standard rooms starting from $350.