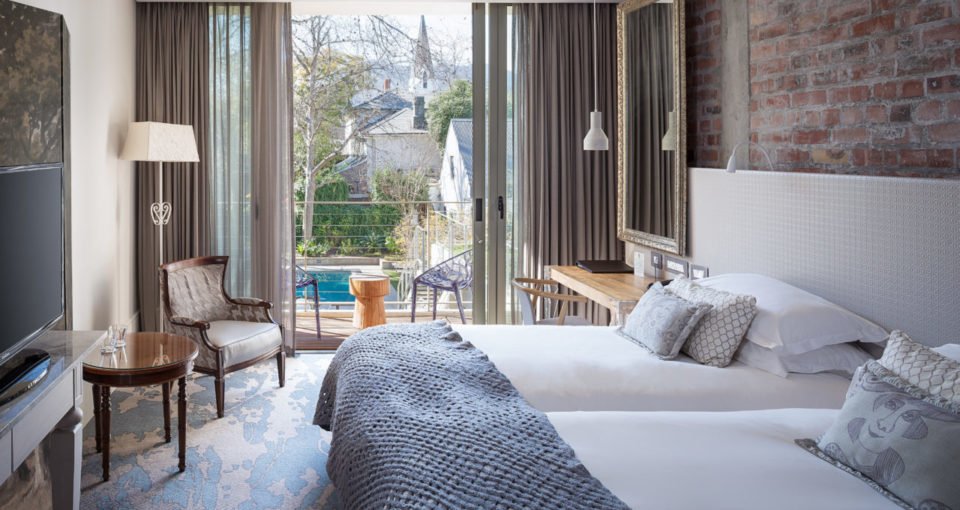 Anyone visiting Stellenbosch can’t help but notice the staggering Oak-lined roads, Cape Dutch architecture and modern touches to this capital of South African wine industry. Even if you find yourself unimpressed by your lodgings, the verdant surroundings act as a delightful setting – no wonder the town has flourished as a place to live and, since the middle of the 19th century, a place to study.

The main streets of Dorp and Church absorb the bulk of tourist traffic, with galleries, coffee shops (not the Dutch kind) and healthy eateries in ample supply. In the centre of this is Oude Werf on Church (“Kirk”) Street, a hotel and restaurant worth noting as a base for explorations within and beyond Stellenbosch.

Oude Werf occupies a historic site that’s significant not just to Stellenbosch to with the wider narrative of Cape Dutch religious culture – its 62 bedrooms are located on the site of South Africa’s first church. Originally completed in 1687, the church eventually relocated to the top of Church Street after a fire, deeming the original site the old churchyard “de Oude Werf”. Church deacon Daniel van Ryneveld was tasked with selling the land, after which its utility moved to accommodating Stellenbosch’s visitors. After another fire at the end of the 19th century, the the construction of the two-storey Georgian hotel was completed, the structure which forms the heart of the building today. Today the hotel includes a pair of extended wings, constructed since being purchased by the Petousis family in 2007.

The extensions help accentuate the natural division of room types into modern and vintage, with the latter occupying the century-old quarters. Synonyms make conflate the room types, so mark down that “Superior” and “Luxury” are the modern style, with “Deluxe” being the more vintage option, finished with old furnishings and high ceilings. Some Superior and Luxury rooms have balconies, and both Luxury and Deluxe have bath tubs.

At the ground level, a courtyard is divided into a restaurant and pool area, an acre of contained land that is strewn with greenery. An American spruce even makes its way through the glass ceiling of the restaurant, keeping in place a commitment to fresh produce, and an especially royal breakfast. Though there is no spa facility at Oude Werf, devout followers of pedicure, facial and massage can request in-room treatments

Those familiar with Oude Werf’s Constantia sister hotel, The Vineyard Hotel in Constantia, will appreciate the emphasis on art, Cape history artefacts and mid-century furnishings. Helmut Stark floral prints cover one wall, including “Cut, Dead and Beautiful”, and just around the corner from a neat coffee bar is the hotel’s blindspot for those willing to resign to a good piece of literature or respectful meditation.

Though Oude Werf doesn’t have its own gym, Stellenbosch has no shortage of brilliant facilities for runners, cyclists and swimmers visiting town. Runners can either head onto the trails next to the sports fields, or else visit the 400m athletics at Maties Gymnasium. A parkrun takes place down the road at 8am on Saturday mornings, going by the name of Root44.

Cyclists might look to head out of town to the east, south of the Simonsberg Nature Reserve up the Helshoogte Pass (4.6km / 5%) before taking a right to the Huggenot town of Franschhoek, buffered on one side by the Franschhoek Pass awaits (7.3km / 6%).  On your return, drop down the climb into The Hoek espresso bar before making it back to Stellenbosch. Quality road bike rentals in Stellenbosch can be organised with RideIn – they have a small selection of carbon frames.

Those interested in swimming or gyming should sign up for a day pass or week-long pass at the Maties Gym, linking their fingerprints for ease-of-access throughout their stay. An outdoor pool is 50m in length, while a backup indoor option of 25m has more availability. The daily rate is R120 or R70.00 for a pool only session. Access for all facilities two weeks is R360 and one week is R240. Note that there is limited access to the pool in January and February.

Fore more information about the hotel and how to book, visit oudewerf.co.za.