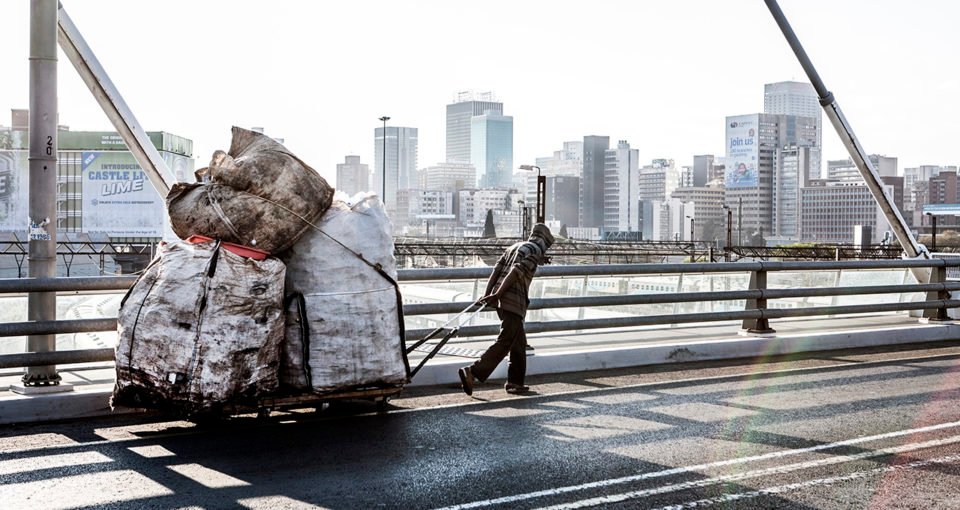 Within the context of economic development, the history of Johannesburg’s industrialisation is one of the most aggressive. At the time when its gold outcrop was discovered in 1884, the area remained sparsely populated by Afrikaner farmers, themselves migrants from the more established Cape Colony. Mining subsequently demanded for the rapid recruitment of labour from areas as far as Botswana’s Francistown, 600km to the north, prompting a rate of population growth that now sets Johannesburg as one of the largest cities in Africa. This massive growth, coupled with under-resourced waste management has led to an urban environmental crisis as landfills mount and inhabitable spaces tighten. As a fascinating example of entrepreneurial agility, 60,000 informal waste pickers have played a significant and salvific role in diverting recyclable waste from tumbling into the city’s brimming landfills.

In Gauteng, the provincial area that encompasses Johannesburg and Pretoria, waste management sits at a crossroads between urban planning, employment, consumptive behaviour and recycling. Being South Africa’s foremost economic hub, the province contributes more than half the country’s waste, despite being the smallest in geographical size of the nine provinces in South Africa. Gauteng occupies just 1.4% of the country’s landmass, despite being home to 21.4% of its population. Most visibly, the present day layout of Johannesburg embodies one of Apartheid’s major failings, that of a segregationist policy through the creation of “homelands” for disenfranchised Bantu populations. Resettlement stunted urbanisation, instead allowing for the proliferation of informal settlements as the norm. Efforts to demarcate land for residential and industrial use have struggled to keep pace with growth, meaning that settlements move between and nearer to province’s 17 landfill sites.

High unemployment and sophisticated recycling infrastructure has led to the creation of a vast nomadic waste picker workforce, themselves key in dealing with Gauteng’s consumer waste. Typically operating independently, waste pickers cover the 18km² of the province, intercepting paper, cardboard, plastic and cans to divert them away from landfills into sorted waste streams for sale to buy-back centres. Aside from the positive work waste pickers are doing, their physical commitment to task is herculean, dragging loads sometimes double their bodyweight through Gauteng’s undulating terrain. For all the ills concerning the rate of violent crime in Johannesburg and its neighbouring areas, the home of the world’s largest human-made forest remains remarkably clean.

As part of a social and environmental initiative, the Gauteng Government has created the Waste Recyclers Project to meet the social and environmental needs of the province. Existing collection services by private companies doesn’t deal with the negative impacts of waste management, since these services prioritise pick-up, and in turn deposit waste in Gauteng’s landfills. From this point, the state has to deal with the environmental impacts — methane generation, surface and underground water contamination and the odours from decaying waste. Despite the waste pickers, 67% of Gauteng’s 19 million tonnes of annual waste finds its waste to a landfill, costing the city R17 billion per year. Waste diversion is the province’s best chance of reducing the short-term and long-term costs of landfilling.

Gauteng’s Director General for Natural Resources, Loyiso Mkwana, has helped steer the province’s foremost waste management project since its conception in 2016. A trained scientist, Mkwana admits that part of the challenge of the Waste Recyclers Project is social, with the recent history of relations between local government and waste pickers being characterised by neglect, as Mkwana makes clear, “For many years, the state hasn’t done anything for them. They have been on the periphery. They think that the only thing that the government wants to do is collect tax. To ask them to disclose how much they are making and then pay tax. Which is not exactly what we want to do.”

Added to this, the daily experience of Gauteng’s waste pickers is one of isolation, often working in the early hours of the morning in places at a distance from their home community. Waste pickers will often sleep rough in order to extend their area of operation and continue to find their specific waste stream in lucrative areas. This degree of independence is easy to observe during a short time spent walking in Johannesburg’s residential areas, with waste pickers usually cloaking their identify through the wearing of balaclavas and hoodies, shamed by the lack of dignity they associate with their work.

The first step in the Waste Recyclers Project was to collect some initial data on the actors within Gauteng’s informal waste management sector. Though studies existed to show how waste could be reduced through formal links with manufacturers, such as forcing tyre manufactures to take responsibility of their products from “cradle-to-grave”, no studies had been done about the informal waste economy. Mkwana and his team set up a pilot in January 2016, developed terms of reference and setting in place the key distinction between waste pickers who operate alone, and those who have organised into co-operatives.

With an initial framework in place, researchers then identified areas of action in the Tembisa township and Ekurhuleni Metropolitan Municipality. Offering a kind of basic skill training to support waste pickers was set as an immediate departure point to establish a relationship with waste pickers. First, to understanding the options to extract greater revenue at buy-back centres, matched ways to better financial management of operational costs and sales. Additionally, knowledge about the hazards involved in handling and storing waste, especially in South Africa where there is no precedent for separating waste as source at the residential level.

But the key takeaway from the pilot research was the clear limitations of the self-propelled method of carrying waste. As well as being exhausting, the non-mechanical haulage reduces the capacity of waste pickers to increase their daily yield, exacerbated by the need to sell the waste at convenient buy-back centres, rather than routing to those that would increase the profit of the load. Subsequently, the Gauteng Government plans to equip waste pickers with motorised, three-wheeler vehicles to help them mechanise their haulage solution. “We looked at that value chain and said, “where can we intervene that will give them the biggest return,”” Mkwana adds.

Though the distribution of the three-wheelers is yet to get underway, Mkwana is hopeful that motorised vehicle will alter dynamics and increase diversion. 50 vehicles will be given to 11 co-operatives in Tembesa and Ekurhuleni where 22 individuals have completed the driving competencies component, and another 26 already have licenses for other motorised vehicles. Each vehicle is linked with the ID number of the vehicle owner, who has qualified to use the vehicle and credited with a valid licence. It is estimated that the vehicles will at least treble the amount a waste picker can collect, increasing average monthly earnings from the current R2,400 average. Demand for paper, packaging and plastics has showed no signs of dipping, so with the increased earning potential, Mkwana hopes more waste can be diverted, while helping solve social challenges of exclusion and low income.

There is still plenty of ground to cover before the Waste Recyclers Project can become sustainable and have significant impact in Gauteng. The government’s preference for working with co-operatives incentivises the organisation of individual waste pickers, while offering an interface for the state when introducing vehicles to other municipalities. Even so, co-operatives themselves remain relatively unorganised when compared with models in Europe and Brazil, with co-operatives in South Africa usually being made of three to six people, with a large organisation being under 20 people. Within most co-operatives, terms between individuals aren’t codified, with no structure, constitution or memorandum of understanding, only a loose intention to co-operate.

To help close the social gap between government employees, waste pickers and their co-operatives, one thought is to introduce a non-profit organisation that specialises in social mobilisation. This would equip the relationship with a third party removed from the government, while adding social and psychological skills to the project. Mkwana admits that the resonating with waste pickers is hard, and that more work needs to be done.

We never wrote soft skills into these terms of reference, we just threw in infrastructure, training and said, “off you go.” And we’re finding, no, our actual ability to interact with them is a big challenge. But it’s an important statement.

Despite the setbacks, there are clear paths for the Waste Recyclers Project which might not have been available to Gauteng had they been embarking on the initiative ten or twenty years ago. Most clearly, the deep penetration of mobile phones among waste pickers and cooperatives opens doors for the ongoing communication and stitching together of communities. Leveraging mobile connectivity to link waste pickers with live rates at buy-back centres would be a major shift in the brokering phase of the workflow, made more viable by the extended reach of the vehicle.

Additionally, waste contracts from offices and industry are held by private companies, themselves contributing to the overflow at landfills. Once waste pickers are formalised and part of co-operatives, the government hopes to introduce large corporates with nearby pickers, removing the cost for the company while increasing the market for collectors. Authorisation and tracking through mobile phones stitches these waypoints together in ways that are technically possible and so substantively dignified.

Closing the gap between government and the informal waste sector is a vital step for Gauteng to solve issues of inclusion and public safety. Couple smartphone technology and an increasing willingness to collaborate in unconventional ways and swift progress can be made. Batteries, e-waste and food waste remain outside the recyclable streams, so raising awareness of their value would set in place increasing diversion. With volumes of waste expected to track the city’s swelling population, entrepreneurs should notice the opportunity to improve the efficiency of Gauteng’s recycling efforts and set new standards in one of the world’s younger megacities.

Thank you to Mark Lewis for the images.